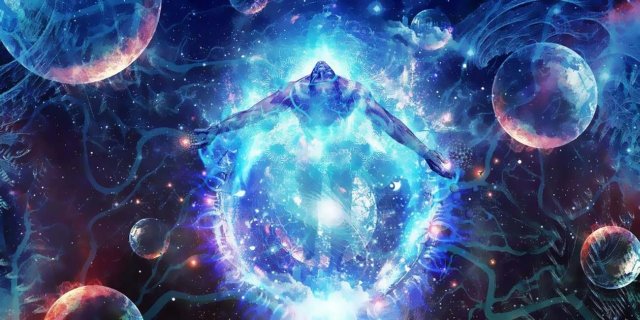 When comparing the current overall level of consciousness that we as the human race exhibit to the unlimited potential that we have in every possible way, we are still infants. Going far beyond the shift from the self-centered to the unity-oriented modality of existence, this potential includes becoming the infinite conscious creative force of Reality itself.

It is a seemingly-unfathomable idea to think about, given our current overall level of consciousness. However, the potential is definitely there; we simply have to go through a supramental transformation of consciousness to reach this destination. Focusing on higher mind-states such as peace, love, and happiness, merging biological and technological systems, and the experience of extropy all assist in manifesting such a reality in humanity’s future. The choice whether we become that infinite infinite creative force is ultimately up to us.

Each moment of existence that we spend resisting the realities of interconnectedness, oneness, and the universal laws such as those pertaining to cause and effect as well as attraction is one more moment keeping us away from attaining such an existence.

Sure, we can put an 8 on its side and say that it is a reasonable visual and mathematical depiction of infinity, but it does not help us much in experiencing infinity or becoming the infinite intelligent consciousness that encompasses all that is in Reality. In order for this idea to work, one must have the conviction that consciousness is expressed as energy and this energy manifests itself in a wide variety of ways; from solid manifestations such as rocks, to the intangible and unquantifiable expressions of consciousness such as love.

This idea makes use of a multidimensional Reality, in which there are several more dimensions than the 4 that we interact with on a daily basis. Theories in physics such as M-Theory identify the existence of 11 dimensions within their models and are adequate at assisting in the understanding of this idea of epigenesis.

Given all of this, it can now be understood how this process of becoming the infinite conscious creative force of Reality can come about. The mystical philosophy that can be used to explain this concept says that a person should utilizes life’s opportunities to change an individual’s circumstances. The evolution of the process is as such:

A person seeks first to understand how previous actions have contributed to current situations. Armed with this knowledge, the person sets out to initiate new causes that will eventually result in the most beneficial effects for both his or herself and humanity, as a whole. The aspirant understands that by using this method, drastic change or elevation in the progression of one’s present and future evolution of consciousness can take place. Such a person is a co-creator in his or her own destiny.

This is something known as “conscious evolution”. Instead of assuming the passive status of a passenger on life’s journey, it is preferred to determine the direction and nature of his or her own trip. Much attention is paid to the subtle dimensions of what is considered the human being. Both eastern and western mystic tradition recognize that the health and vitality of the physical body are direct manifestations of this “higher” etheric vehicle.

According to the evolution of consciousness, humans build upon that which has already been created, but add new elements because of the activity of one’s consciousness (in times past interpreted or labeled as spirit). Humans have the capacity, therefore, to become creative intelligences (creators) and ultimately, to become part of the Supermind that is the infinite creative intelligence of Reality. For a human being to fulfill this promise, his or her training should allow for the exercise of originality, which distinguishes creation from imitation.

When the process of epigenesis becomes inactive, in the individual or even in a race of species, evolution ceases and degeneration commences. This concept is based on the view of the world as being a training school, which posits that while mistakes are made in life, humans often learn more from mistakes than successes. Suffering is considered as merely the result of error, and the impact of suffering on consciousness causes humans to be active along other lines which are found to be good, in harmony with nature. Humans are seen as localized fields of consciousness attending the school of life for the purpose of unfolding latent powers within their beings, developing themselves from impotence to omnipotence, reaching the stage of creative beings at the end of humanity’s present physical evolution.

Science fiction has played with the idea of humans eventually evolving to the point where they become pure energy and exist in a higher dimension of Reality. Although it may seem like fiction to us humans, it may have become a reality for a race somewhere else in the universe (assuming there is life beyond earth). There is little in the way of impossibility in Reality, which assists in assuring us that the evolution of humanity is far from over.

Consciousness has growth potential that is not even contemplated by the most advanced thinkers of today. There must be an open mind when musing about the possible future metamorphosis of the transpersonal consciousness of humanity since without such an accepting position of awareness, the vision cannot be seen. If the vision cannot be seen, it cannot ever come to fruition or become manifest.

The 21st century is teeming with advanced concepts, ideas, and theories concerning our current abilities and future possibilities. Let us not close doors that have never been walked through. To get to the top of the mountain, one must first have the courage to climb.