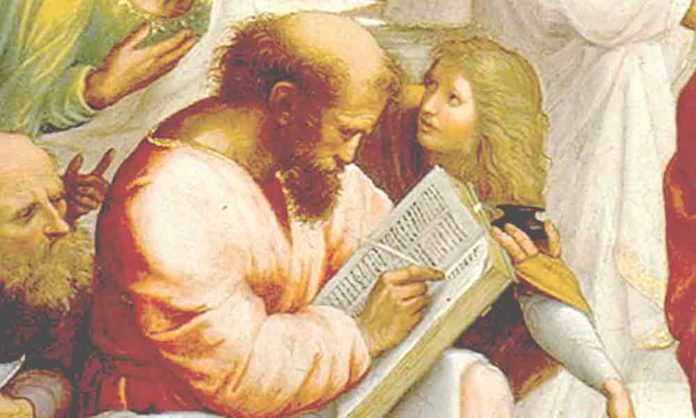 There are many ancient texts that have insightful wisdom embedded within them. Some of these include the Emerald Tablets of Thoth, the writings of Confucius, and The Golden Verses of Pythagoras. This last ancient text is a collection of wise and insightful sayings that are attributed to being written by Pythagoras. The exact origins of the golden verses are actually unknown and dating them is quite difficult, although it is possible that they can date as far back as the third century BCE.

This collection of wise sayings has been held to such high esteem that their renown persisted during the medieval ages and well into the renaissance. Although some of the verses do not apply as well as they did when they were written (such as “First worship the Immortal Gods, as they are established and ordained by the Law.”), there are still several that can be used in one’s continuous personal growth and development. Below are a few select verses that we have chosen in order to elaborate upon. After taking a look at all 71 verses, these particular ones are the most timeless in our opinion, and will hopefully be helpful in your personal growth.

Remember about the law of cause and effect in your life.

The law of cause and effect is a universal law and fact of life that sometimes also goes by the Sanskrit name of karma. Since all manifestations of consciousness within Reality are interconnected, everything affects everything else. The well-known Golden Rule is founded upon the idea that what we do to someone else affects us as well. Given this reality, it does not benefit us if we project negativity towards anyone because this will either instantly or eventually affect us with the very negativity we had projected. By remembering the nature of cause and effect, we can be mindful of our thoughts and actions by only projecting positivity. Like attracts like and the more positivity we project, the more positivity will come back to us. Experience this and you shall see it to be true.

There are many possibilities people can choose from. There are bad and there are good ones. So, look carefully and choose for yourself the noble path.

There are an infinite number of possibilities. Anything can happen. We have the power to decide what we wish to do, because of the free will we have as human beings. Our thoughts shape our reality and so it is possible to focus our thoughts only on the positive and the beneficial so that we can create for ourselves a reality in which bliss and ecstasy shine down on us. This is possible, since anything is possible.

All we need, is the will, courage, and determination to become trailblazers in our lives towards that which is called the pursuit of happiness. Do not care what others may think of your decisions, as this is your life, not theirs. You are the key holder to your own destiny. Decide for yourself what path you wish to take. After all, there are many paths to the summit of the mountain; some may take longer than others, but eventually all will reach the summit.

Be afraid of becoming a stingy person, but fear also to squander goods like careless people do.

Extremes in behavior do not allow us to function optimally and so just as it is unwise to be lavish, being stingy can be just as detrimental. Although fear is a strong word, it could perhaps be said that one should be mindful of one’s actions regarding stinginess and squandering. Careless people squander it is said, and so the logical fix for this is to be more care-full rather than care-less. By being stingy, we miss out on so many incredible life opportunities that come about by taking risks and exploring the wonderment and awe of life. Balance, Balance, Balance.

Do only that which will not lead you to destruction! Therefore, before acting, deliberate on your every step and deed.

Let creativity abound. Shy away from actions and thoughts that are destructive in nature. Be mindful of what you do instead of acting first and then thinking if what you just did was a good idea or not. Taking a few moments out of your life in order to deliberate can save what sometimes becomes a lifetime of suffering and anguish. One of the paradoxes of Reality is that it is much easier to destroy than to create. With this in mind, think about how much time, effort, and energy you are erasing by the destructive actions you may be partaking in.

Create! Add to the infinite knowledge base of universal consciousness and reality and do something that will benefit yourself and/or others. Not only will you feel better afterwards, but you will elevate the beings of others. You may even send someone into a state of transcendental bliss.

You will know also that people themselves cause their calamities due to ignorance! They are free in choosing their destinies!

It is said that ignorance is bliss. The fact of the matter is that this is usually not so. Many nations and societies have fallen into the depths of totalitarianism and slavery as a result of the ignorance of the general masses. We hold our destiny in our hands. Empower yourself to realize this statement as being true. You control and shape your reality in a very large way.

Although there may be macrocosmic aspects of Reality that we cannot have complete control over, the things we do have the ability to control are very numerous. Let us all save humanity from experiencing much suffering by ridding the world of ignorance and expanding peoples’ awareness on whatever we feel is necessary. Social transformation occurs when the veil of ignorance is lifted. Let us learn from our past and experience a future reality that does not have the negative repercussions that come with ignorance.

But we should not abandon hope of saving people from the darkness of ignorance — for every human has a Divine root.

Don’t feel that just because the majority of humanity is ignorant of truth that you should feel apathetic about the state of things and the future of humanity. Be a beacon of light. Shine down onto the darkness of ignorance and illuminate the awareness of others, for we are all One and we are all parts of the Whole of reality and Infinity itself. We are but drops of awareness in the ocean of Consciousness.

Ignorance is a very dark place in actuality, because awareness in such a state is limited to such a small area of reality. So very little is learned or experienced with an ignorant mind. We are all in this together and so it could only help if we lift the veil of ignorance out from under peoples’ eyes. Become something that legends will talk about for ages to come.