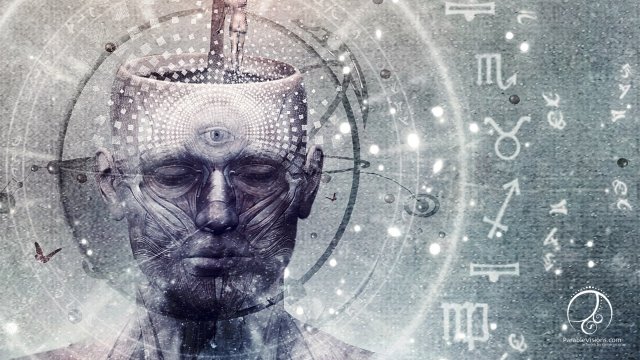 Human beings perceive everything within their realities through the five basic senses of taste, touch, hearing, sight, and smell (we will limit this article to five when in reality there are upwards of 20). By experiencing the sensations of the reality around us, we create a subjective understanding of what reality is and how we perceive it to be constructed. According to the generally accepted evolutionary framework for the human race, language did not arise until very recently.

It’s a fairly novel aspect of the human experience that is so complex that it requires the utilization of more than one of the basic five human senses. Take a book for example. In it, there are words and these words require the sense of sight in order to perceive what the thought-forms being expressed are conveying. If someone was reading that book to you, the sense of hearing would be necessary for understanding the thought-patterns being transmitted from the person reading the book to you. The reader of that book (in most cases) would also need to use the sense of touch in order to turn the page to the next stream of words that formulating another thought-form or continue a previous one.

This simple example is given to illustrate that language is a complex process that along with it brings tremendous power. This power is so strong that it can be demonstrated that language can actually influence the way we think. George Orwell in his novel 1984 gave an example of language influencing thought with his use of the term doublespeak, which is language that deliberately disguises, distorts, or reverses the meaning of words….in effect changing what we think about a given subject or thought-form. Language can be an incredible tool for change, both positive and negative. It can be seen as being used to conquer entire nations and inspire untold billions. As linguist Benjamin Lee Whorf said, “language itself shapes a man’s basic ideas.”

The influence of language on how we think and perceive aspects of reality is so great that it can fundamentally alter our perception of the dimension we call time. The Hopi tribe in the Americas have no past tense for their verbs for instance, which would alter their perception of time in such a way that they would be not able to so readily think about the past. They focused on the present moment, since it is the only moment that will ever exist.

The altered perception of time is not the only way language influences how we think. Our very sense of self is also significantly altered…especially if a person is bilingual. Depending on which language a person who is bilingual is using, their sense of self changes. The differences may become so great as to alter their very personalities. I have seen this in action on my own self, since I am bilingual and I can notice that when I speak in Polish or think in Polish syntax, my personality takes on an almost ‘alter-ego’ of sorts.

Others who are bilingual report the same experience and it’s been demonstrated strongly in studies conducted in the 1990s and 2000s with Asian immigrants to North America. When they described themselves in English, their self-descriptions were usually Canadian (they expressed mostly positive self-statements and moods). When responding in Chinese, they were typically Chinese (they were in more agreement with Chinese values and had roughly equal the amount of positive and negative self-statements and moods). Their language use literally shaped how they thought of themselves.

By saying that language influences the way we think, it should be understood that this does not mean that it absolutely determines the way we think 100% of the time. Certain tribes in Papua New Guinea for example do not use language to communicate thought-forms and yet they seem to perceive things just as others do. Language certainly has a strong influence on how we think, however.

Using words such as ‘he’, ‘mankind’, and ‘god’ for instance, transmits a particular perception of concepts that are supposed to be all-encompassing while using words that are not. The generic use of these words is dangerous in that it can hinder a person’s understanding of the concept by limiting it to a particular category or construct. This is why other words (humanity, source, etc.) are better choices for the words noted earlier to describe the thought-forms in a more embracing and universal way. The very fact that there is no word in the English language for a genderless being (it is impersonal and therefore cannot be applied) demonstrates that there can be a hindrance or limit on one’s ability to perceive something in reality.

The power of language to influence thought makes vocabulary building a critical part of education. To expand language is to expand the ability to think. We can see this in children, whose thinking develops hand in hand with language. It helps a great deal to increase our ‘word power’ by introducing new words into our vocabulary (be they established words or neologisms that we have created) in order to teach new ideas and new ways of thinking. The increase in word power extends to those who lack the sense of hearing, thanks to the modern invention of sign language. Since its inception, sign language has allowed deaf people to become fully literate.

Whether we are deaf or not, language transforms experience and connects us to the past as well as the future. Language sparks imagination. Language connects us to one another. Be mindful of how important language is to our perception of reality and all its various aspects. You have nothing to lose and everything to gain. You can empower yourself beyond your present limitations, if they exist, and expand your awareness beyond the hindering boundaries of the lexicon of language.