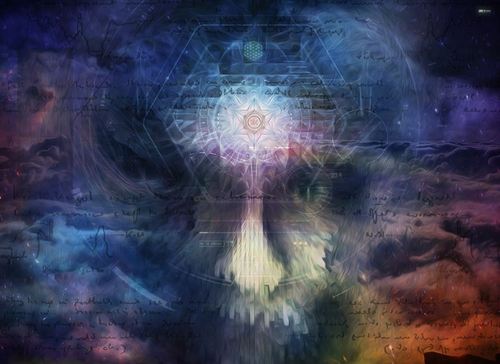 We perceive Reality through our senses which convince us that the way in which we experience the world around us is exactly the way it exists. The true nature of Reality, however, is not experienced through this superficial perception of the world and limits the incredible (some say magical) nature of the universe and beyond. Thanks to the new physics led by such luminaries as David Bohm, Ervin Laszlo and Fred Alan Wolf, the collective consciousness now has easy access to the in-formation about the universe showing us that Reality is far more complex and interwoven that we have imagined it to be.

The illusion of a stable dense reality that we call the third dimension can distort our very understanding of what we are, how we are, and why we are. We oftentimes put too much trust in our basics senses without seeing if there is more than meets the eye (oftentimes doing so in order to create simple answers to complex questions). The wonderful truth is that there is much, much more to life than this. The new physics validates many understandings of life, the universe, and Reality as a whole that were experienced by the sages, the mystics, and the meditators of ages past. One of the most incredible validations is the reality of multi-dimensionality.

David Bohm, one of the most forward-thinking paradigm-shifters of the new physics, had discovered through mathematical equations and actual experiments that particles making up matter in the form of a flower, chair, human, etc. are literal “projections of a higher-dimensional reality which cannot be accounted for in terms of any force or interaction between them”.

It’s discoveries and proclamations such as this one that have helped establish with larger and larger certainty the idea that we are living and experiencing a world that is a holographic projection out of some primary Reality. It is the understanding of such a fundamental aspect of reality that made physicists such as Albert Einstein and Max Planck to effectively put forward the idea that matter, the way we perceive it to be, does not exist.

When we understand that all is one and that everything is connected to everything else within our lives, the planet and the universe, then we cannot just stop there…we have to expand it far beyond these limitations. David Bohm explained that the “implicate order (the unbroken wholeness of the totality of existence as an undivided flowing movement without borders) has to be extended into a multidimensional reality. In principle, this reality is one unbroken whole, including the entire universe with all its ‘fields’ and ‘particles.’”

Reality may seem vast, elaborate and complex yet it is ultimately an undivided Whole.

Accepting a multidimensional reality is one of the most significant paradigm shifts that you can have in your lifetime. The way you look at everything changes. You even have the ability to experience reality in a far wider way than you once did since you will be more aware of there being more than what you previously thought there was “out there.” All the seemingly empty space around you will not be empty anymore. Bohm and other physicists have shifted their positions of awareness to see the world through this new lens of wonderment. Bohm said that “what we call empty space contains an immense background of energy, and matter as we know it is a small, ‘quantized’ wavelike excitation on top of this background, like a tiny ripple on a vast sea.”

Looking deeper into these energy ripples on the cosmic sea, physicists have found that in a cubic centimeter of seemingly-empty space, with the shortest possible wave (10^-33 cm), there is far more energy than the total energy of all the physical matter in the known universe. The amazing and incredible nature of this discovery is almost surreal, yet it’s been found to be a very real aspect of our Reality.

Why live in a shadow of what truly is? Let go of all past perceptions about a bland three-dimensional Reality that you may have once had. Understand, experience, and embrace the upgraded reality you can now undoubtedly become aware of. See the incredible magic that you are a part of, since you are multidimensional just as everything else is. Welcome to your new upgraded Reality. Your life will look completely different from here on out.