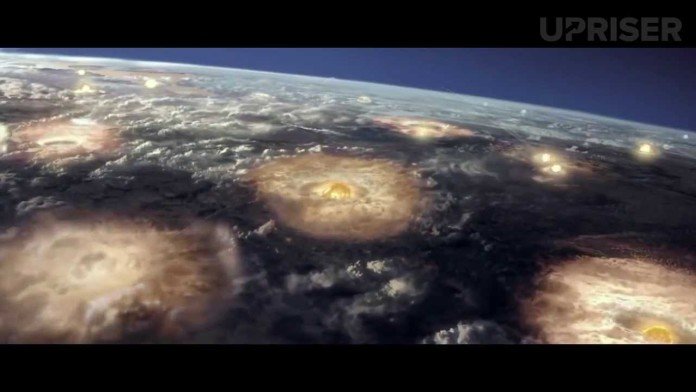 Greetings… We are from the future. Everything is going to be okay. The future is a beautiful place … But you will need some training in order to inhabit it.

In the future – technology evolves faster than any human mind can think. When the singularity occurred. We became like gods – able to create entire worlds in the blink of an eye.

Every thought had drastic immediate impact. All of our dreams became a reality – but so did our nightmares. The future became a battle of ideas. We had to learn to direct our minds – to prevent dark psychological forces – from destroying all of us. Now with every new world we create, we summon the sacred imperative of mind, “Let there be Light.”

“How can we be from the future?” you might ask. Let us explain. Plants harvest light with near perfect efficiency. You may not realize it, but this is impossible under classical physics. Along the way to the photosynthesizing core – photons of light should collide with other particles, but they don’t. A photon succeeding in reaching the core is as likely – as you sprinting blindfolded through a dense forest – reaching the center without striking a single tree.

This is why man made solar panels get nowhere near the efficiency of a simple leaf. Plants are engaged in a kind of miracle. The plant puts the photon into a state of quantum superposition, multiplying it by every route that photon could possibly take. Imagine – blindly sprinting through a forest – being multiplied into every one of the billions of possible paths. If any one of your possibilities were observed hitting a tree, the superposition would collapse – and that would be your final outcome, but the plant patiently refuses to observe any of these casualties – while at it’s heart it sings “Let there be light.”

When any of the possibilities finally reaches the core without fail, only that winner is observed. All the other possibilities disappear. The winner is transmitted back through time – from the future – and becomes the only possibility that ever existed. This is how photons reach the plant’s core with impossible precision. This is how you – and every organism in existence – overcame the massive improbabilities of life. — This is how we are from the future. This is how you will become the light of the world, (as we invoke the sacred imperative together) “Let there be light.”