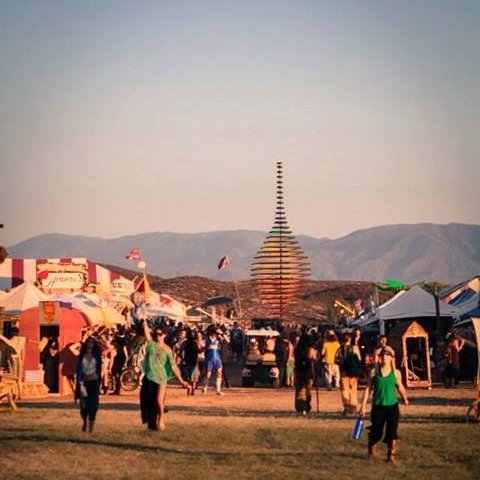 In our final interview before embarking on the journey to Lightning in a Bottle we spoke with Dede Flemming, one of the 3 Flemming brothers that founded The Do Lab and created the one-of-a-kind festival experience that has come to be known as Lightning in a Bottle. We were able to gain a deeper understanding into the philosophy and direction of LiB and where things are heading for the future of LiB and other festivals that align themselves with similar principles. Enjoy the interview, we hope to see you at LiB!

How to Lightning in a Bottle come into existence?

There’s 3 of us (brothers) that put this on and we’ve been at it for 10 years now. We’re at Coachella for the 10th year now as The Do Lab. At first it was just nothing more than a name for a fun birthday party amongst friends in 2000 and it’s grown into what it is now.

With Lightning in a Bottle having established itself as being more than the typical music and arts festival, was always backed with the intention and philosophy is has today or did that evolve and emerge as time went on?

It definitely evolved. We started with the intention of creating a unique festival by bringing different elements you don’t typically see at other festivals. We invited guest speakers for things like sustainable gardening or how to clean your home with sustainable products. We started with a similar vision but no real focus. Now, we’ve expanded and built on it and still are. We’re essentially making this up as we go. We added meditation in 2nd or 3rd year because Jesse Shannon (Director of Marketing & Communications at The Do Lab) got into meditation and introduced it into the festival, which is true for so many different areas. Things get added organically.

Do you feel LiB has changed peoples’ lives?

For sure. Alot comes down to community. You’re surrounded by houses of people that have similar a perspective on life and people who don’t have judgement and will welcome you into their circle of friends. If you go solo you’ll have much greater experience because the community at large will embrace you, show you and teach you things. They will make you feel safe and when you feel safe you can be yourself.

What was the reason behind moving the festival up to Bradley, CA?

Finding a home for the festival has always been a challenge because of its uniqueness. Not many properties that can host LiB with all the camping and parking yet be secluded enough for no sound issues. We want this new location to be our home for a while since it started to get too crowded in Orange County.

Will people be able to swim in Lake San Antonio?

The water is definitely not high enough to swim in the lake right now but we hope it will help open peoples’ eyes to the drastic situation our climate is in. However, we are excited holding LiB here for the coming years since it’s an incredible location with a beautiful lake.

Since Lightning in a Bottle in many ways is a trailblazer and a leader in the transformational festival culture, how do you see LiB expand it’s positive imprint on people and society? What’s in your LiB vision for the next 5 years?

“Transformational festival” is definitely not my favorite term since it doesn’t fit well and to alot of us on our team. Our goal is for people to take something home with them. Sure, there are transformational elements but you don’t have to go to festivals to have a transformational moment. We see alot of other festivals implementing practices we’ve introduced…even Coachella started to implement some of our practices on a grand scale. On an individual basis, we see the change in people and we hear the stories. People definitely do take something home with them from our festival. People are demanding a richer experience. The concert environment is simply not enough anymore. People are challenging producers of shows to add and give more and provide interactive experiences and teach them something more that they can take back home with them.

Free water is a big festival shift we were proud to be a trailblazer in, as well as refillable water stations. It was something we started doing in 2006 and now most big festivals do it. We also have recycling programs and have had incentives in the past for recycling like winning tickets for the next festival for the ‘greenest camp’. People would come up with fun and creative ways to make their camp green like having solar installations, mirrored dishes using the sun to boil water, and others. We get new people every year who have never been to something like LiB and we welcome them. They may throw trash on the ground and others will say “hey man this isn’t that kind of festival, you need to leave no trace” and then people start to educate themselves.

At Shift we’re look at what humanity can become compared to where it’s at today and we can see the opportunity of humanity evolving to have planetary consciousness, which means creating a sustainable home for humanity in nature, local & global self-organization, recognition of wholeness and interconectedness, awakening and nurturing spirituality, moving from centralized to acentric power, moving from mechanistic to living systems, moving from greed & scarcity to caring & sufficiency, and moving from competition to co-creation. With the trends pointing to this being the emerging reality (and LiB being a model by promoting it), do you see a future where LiB will have node gatherings across the country and perhaps the world to further promote this emerging worldview?

It’s already happening now to a certain extent through people like you that report this and get it out to the world which gets more people to learn about it that way. I don’t know if we’ll have node gatherings. We travel the world and do different projects and shows and we have now become an international brand. The more we share our story the more we’ll grow and the bigger it gets the more we’ll achieve.

In 2012 The Do Lab was going to hold Rise & Shine Gathering, a festival more focused on education and consciousness expansion while still having music as an integral part. Sadly Rise & Shine never materialized. Will we see it or something similar in the near future?

We were really excited about it and series of unfortunate events led to its cancellation. A month and a half out it still wasn’t selling well, costing more and more money. We also found out we were losing the LiB venue we were using. Alot was at stake and so we made the decision to push it down the road. I don’t know if it will be called Rise & Shine but it will have alot of the same elements as LiB. We want to keep doing the holistic side, we just need to reevaluate things but we definitely want to start a second one soon…hopefully next year in the fall.