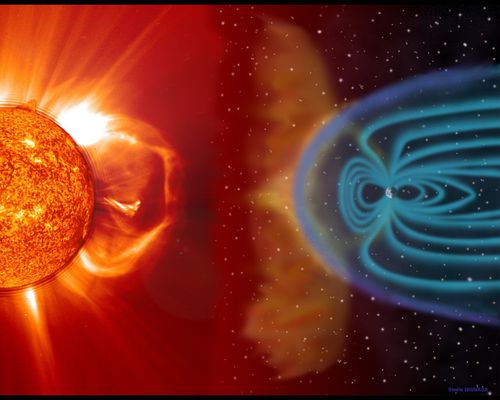 Effects of Solar and Geomagnetic Activity on Humans

Solar and geomagnetic activity can affect human health and behavior, including social behavior and unrest around the world. There is strong and convincing evidence supporting this. For example, we witnessed an increase in social unrest, revolutions, insurrections and uprisings during the upswing of the current solar cycle. The most prominent example is the Arab Spring, which started in December 2010. By December 2013, rulers had been forced from power in Tunisia, Egypt, Libya and Yemen. Civil uprisings erupted in Bahrain and Syria, and there were major protests in Algeria, Iraq, Jordan, Kuwait, Morocco and Sudan. NASA has speculated that the sun reached its peak around the end of 2013 and the downswing of the cycle is now under way. As observed by Russian scientist Alexander Chizhevsky, also known as A.L. Tchijevsky, most of a solar cycle’s effect on human health and behavior occurs within about five years of the cycle’s peak. His observation appears to be consistent with some current events in the world. Notable among these are recent events in Ukraine and Venezuela: Tensions between Ukraine and Russia boiled over in November 2013, culminating with violent clashes in the streets, the president’s ouster and finally the Russian annexation of Crimea. In Venezuela, violent demonstrations began on Feb. 4 and rocked Venezuela for weeks. Further indications of the turmoil that can occur around a solar cycle’s peak may be extreme weather events of 2013 and early 2014: Intense drought persisted in California and other U.S. states, while record snowfall was recorded in the central and northeastern states; there were record highs in Australia, extreme drought in New Zealand and exceptional rain in Spain and China. With continued social unrest in so many areas of the world and abnormal weather patterns around the planet, the question arises: Do humans have any input in or control over what is happening? GCI hypothesizes that geomagnetic and solar activity not only affect human health and behavior, but also that Earth’s magnetic field is a carrier of biologically relevant information connecting all living systems. GCI also hypothesizes that every individual affects the global information field.

HeartMath’s research shows that animals and the nervous systems of people in close proximity can detect the heart’s electromagnetic field and that a bioelectromagnetic field such as that radiated by the human heart and brain can affect other individuals and the global information field environment. Research conducted in our laboratory has confirmed the hypothesis that when an individual is in a state of heart coherence, the heart radiates a more coherent electromagnetic signal into the environment. Additionally, when we are in a coherent state we are more sensitive to detecting the information in the fields radiated by others. Recent scientific studies involving DNA, water, the environment and magnetic fields, lend support to the hypothesis that magnetic fields can carry biologically relevant information. The authors of a 2011 study conducted by Nobel laureate Luc Montagnier et al., say DNA in their experiments teleported itself to distant cells through electromagnetic signals. Furthermore, they indicated that this information could instruct the re-creation of DNA when the basic constituents of DNA are present and coupled with extremely low electromagnetic frequency fields. Such low electromagnetic frequency fields, ones that are able to stimulate DNA information transfer, could come from sources such as Schuman resonances, which occur naturally in the earth’s electromagnetic field spectrum, starting at 7.83 hertz. Thus, some scientists surmise, solar and geomagnetic activity could affect human health and behavior – down to the level of the DNA. If DNA signaling can be stimulated by the Schuman resonances and brain and heart frequencies overlap with those frequencies, it raises interesting questions about how we all are interconnected with each other through solar and geomagnetic frequencies. Other scientific research has explored the nature and interaction of ecosystems, water molecules and electromagnetic fields.

In Conclusion and Looking Ahead

It remains uncertain when humans finally will move away from the current global unrest and instability to a more stable and peaceful planet. There clearly is an urgency, however, among millions of people to discard old structures that do not serve all sentient beings and the planetary environment. We are in the midst of a paradigm shift in consciousness and on the threshold of a new era of personal and global harmony. Solar activity not only has been correlated with social unrest, destructive climatic conditions and other adverse events, but also with periods of great human achievement, including in architecture, arts and science and positive social change. We can learn from past mistakes and consciously choose to harness such energetic influences for human flourishing and advancement and humanitarian efforts. The Global Coherence Initiative employs multiple strategies for increasing personal, social and global coherence. Through GCI’s internet-based global network, a rich array of people around the world are connecting daily to radiate heart consciousness around the planet to shift global consciousness toward a more harmonious and peaceful future. It is with gratitude and appreciation that all of us at GCI thank you for your continued support as together we seek to increase global coherence. Written by Annette Deyhle, Ph.D., and the GCI research team

About the Global Coherence Initiative

The Global Coherence Initiative is a science-based, co-creative project to unite people in heart-focused care and intention, to facilitate the shift in global consciousness from instability and discord to balance, cooperation and enduring peace.

This project has been launched by the Institute of HeartMath®, a nonprofit 501(c)(3), a recognized global leader in researching emotional physiology, heart-brain interactions and the physiology of optimal health and performance.

The Global Coherence Initiative is one of many care and compassion initiatives taking place on the planet. Each year, an increasing number of groups and online communities are radiating compassion and care to the planet in these times of need. We and others feel that these collective heart-based initiatives, rather than being a trend, represent the proactive consciousness platform of the future, in which individuals and communities take responsibility for shaping a new world by increasing love, care and compassion for the global whole.