An underlined assumption in our society is that everyday waking consciousness is the truest expression of how things are out there in “objective” reality. We assume it to be more valid than say dream states or other forms of Altered States of Consciousness (ASC) such as visions, trance, hypnosis, meditative states or hallucinations brought on by substances such as ayahuasca.

But what if this assumption is wrong? What if the realms we visit in an ASC such as dreams, are in fact just as valid, real and important (or perhaps more so) than everyday waking consciousness?

Evidence from perception science as well as quantum physics suggest this may in fact be the case. Furthermore, a deeper look into the ASC phenomenon itself reveals it may be more valuable than many of us appreciate today with dramatic implications for humanity on an individual and collective level.

The Science Behind Our Experience
The brain does a lot of work behind the scenes to create a coherent, stable and predictable experience. The following are two examples from perception that demonstrate this: Colour vision and the blind spot test.
Colour is Created by the Brain
As Sir Isaac Newton famously said:

“… the rays to speak properly are not coloured. In them there is nothing else than a certain power an disposition to stir up a sensation of this or that colour” -Sir Isaac Newton (1730).

Colour perception happens through a reaction between light of varying wavelengths that enter the eye and photoreceptor cells in the eye known as cones. Information about the wavelength of light is then sent via an electrical signal to the brain, which is perceived as colour. What this process reveals is that colour perception (and in fact all perception) tells us some information about the nature of the world out there, but there is no separating this out of the subjective experience. Put another way, there is nothing inherently “red” about an apple, apples appear red to us because of the nature of our visual system.

Another visual system could very well tell us different things about the objective world around us. In fact, the visual spectrum of light only describes the light visible to humans, not that it is impossible to perceive light of other wavelengths. The honeybee can perceive ultra violet light, for instance.

Filling in What Should be There
Another perception myth is that information out there comes in and is interpreted in a clean unbiased fashion. There are many examples of how this is not the case, but the blind spot experiment is a quick way to access how the brain fills in gaps continually without you even knowing it.

There is a blind spot in the middle of the eye in the center of your field of vision. This is because there is a total lack of photoreceptor cells where the optic nerve connects to the retina. How do we never notice this? Try the following demonstration: 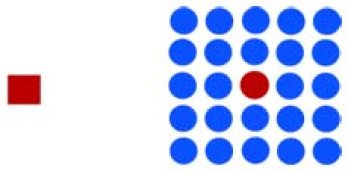 You can see here that your brain cleverly accounts for the blind spot not by merely extending the immediate surrounding (i.e. you don’t just see a white spot for instance), but actually accounts for the whole picture and interprets what is most likely missing. This is one example of what is known in psychology as top down processing.

What I hope these examples illustrate is that although we assume our waking experience reflects the world out there, the line is less clear-cut.

Now take a look around you, the coherent integrated and seamless view before you is actually a product of your brain which took a rough sketch of sensory input and built this scene for you. This begs the question, could it be that the seemingly stable and predictable experience of everyday waking consciousness has merely fooled us into believing this is how things truly are?

The Nature of Everyday Waking Consciousness
The tricks our brain plays during a normal ordinary conscious state lead us to make conclusions about the nature of reality that are erroneous, such as how “solid” a solid object is. We now know that everything is made up of tiny vibrating particles that are mostly empty space. But this is not what we see when we look at solid objects, why would this be? Possibly because it is not generally useful for survival purposes.

Waking consciousness is good for getting around, like crossing the street. In fact, it evolved for this purpose. This does not necessarily imply it is the truest reflection of how things are.

Quantum Physics and the ASC Phenomenon
There is a great deal of similarity between the nature of reality at the quantum level and the reality one encounters in an ASC. For instance, the world at the quantum level is made up of potential. Take the famous double slit experiment:

Here we can see at a fundamental level that matter behaves in a less-defined fashion until met with something that aims to define it (in this case the measuring apparatus). This leads to one of the most difficult implications to grasp about the potential nature of reality: That it may be more a sea of potential waiting to be interpreted then stable and predictable mass and structure.

Interestingly, the ASC phenomenon exhibits many similarities to an interaction with a sea of potential. Consider dreams:

In order to create a dream, the mind accomplishes a powerful feat. It scans an individual’s past experiences, incorporates potential experiences (such as fears or hopes) and even integrates fantastical and imaginary ones as well (such as flying), tying these all into a narrative we recall as a dream.

If at a fundamental level reality is potential, the notion an ASC is more “real” than everyday waking consciousness may in fact be a closer to the truth. In fact, perhaps ASC experiences allow us to perceive and interact with this potential more than ordinary consciousness permits.

The Importance of ASC
As stated earlier, ordinary waking consciousness serves a function, mainly to get by and survive. What about the ASC phenomenon, what is its purpose?

One thing to realize is that the ability to experience an ASC is absolutely universal to all of us since our species appeared on this planet. Interested individuals can read more about this in Graham Hancock’s Supernatural: Meetings with the Ancient Teachers of Mankind

What many who research this phenomenon find is that there an undeniable element of self reflection with the purpose of eliciting learning, or the realization of something, whether it be about the self, society, the purpose of life, etc.

“There is a magical mirror in this place we find ourselves while dreaming. It is a mirror capable of reflecting a profoundly honest picture of who we are rather than who we would like to think we are or who we would like others to think we are…. The view reflected back … is a view without pretense. It is the truth, as close as we can get to whatever we mean by subjective truth. In a sense it is a privileged portrait of intrinsic value to a dreamer in search of a more honest self-concept.” -Montague Ullman (1993)

Perhaps there is an optional upgrade to our consciousness available through ASC. Although we can get by with the regular model (our everyday consciousness), for those of us who seek something deeper, something richer out of life, there is the ASC. Here we are able to access a higher level of awareness, beyond surviving to thriving.

Implications of ASC Individually and Collectively
The unpredictable nature of the ASC experience coupled with our poor understanding of their function has lead to their fundamental devaluing in our society. This can be compared to more so-called “primitive” cultures where a great deal of importance and significance is often placed on these states.

It may be time to ask ourselves, have we lost something important?

Perhaps ASCs including dreams, meditative states, etc. are the lesson, the classroom so to speak, and waking reality is the exam. By missing the message by denying our self the chance to encounter them, we may be showing up to an exam unprepared.

Supernatural: Meetings with the Ancient Teachers of Mankind by Graham Hancock (2007)