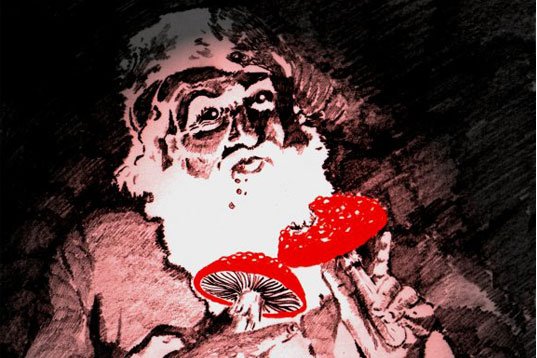 The story of Santa and his flying reindeer can be traced to an unlikely source: hallucinogenic or “magic” mushrooms, according to one theory.

“Santa is a modern counterpart of a shaman, who consumed mind-altering plants and fungi to commune with the spirit world,” said John Rush, an anthropologist and instructor at Sierra College in Rocklin, Calif.

Here are eight ways that hallucinogenic mushrooms explain the story of Santa and his reindeer.

1. Arctic shamans gave out mushrooms on the winter solstice. 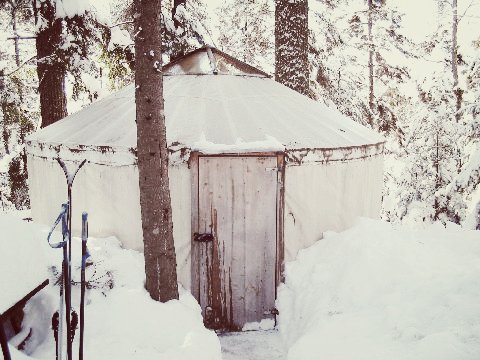 According to the theory, the legend of Santa derives from shamans in the Siberian and Arctic regions who dropped into locals’ teepee-like homes with a bag full of hallucinogenic mushrooms as presents in late December, Rush said.

“As the story goes, up until a few hundred years ago, these practicing shamans or priests connected to the older traditions would collect Amanita muscaria (the Holy Mushroom), dry them and then give them as gifts on the winter solstice,” Rush told LiveScience in an email. “Because snow is usually blocking doors, there was an opening in the roof through which people entered and exited, thus the chimney story.” 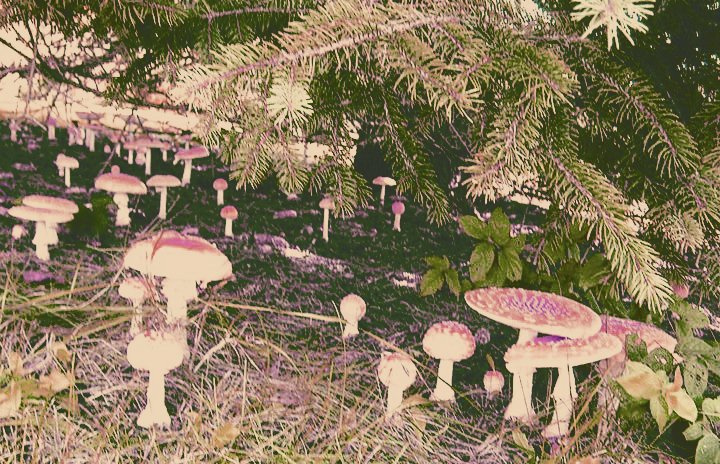 That’s just one of the symbolic connections between the Amanita muscaria mushroom and the iconography of Christmas, according to several historians and ethnomycologists, or people who study fungi’s influence on human societies. Of course, not all scientists agree that the Santa story is tied to a hallucinogen. [Trippy Tales: History of Magic Mushrooms & Other Hallucinogens]

In his book “Mushrooms and Mankind” (The Book Tree, 2003) the late author James Arthur points out that Amanita muscaria, also known as fly agaric, lives throughout the Northern Hemisphere under conifers and birch trees, with which the fungi — which are deep red with white flecks — have a symbiotic relationship. This partially explains the practice of the Christmas tree, and the placement of bright red-and-white presents underneath it, which look like Amanita mushrooms, he wrote. 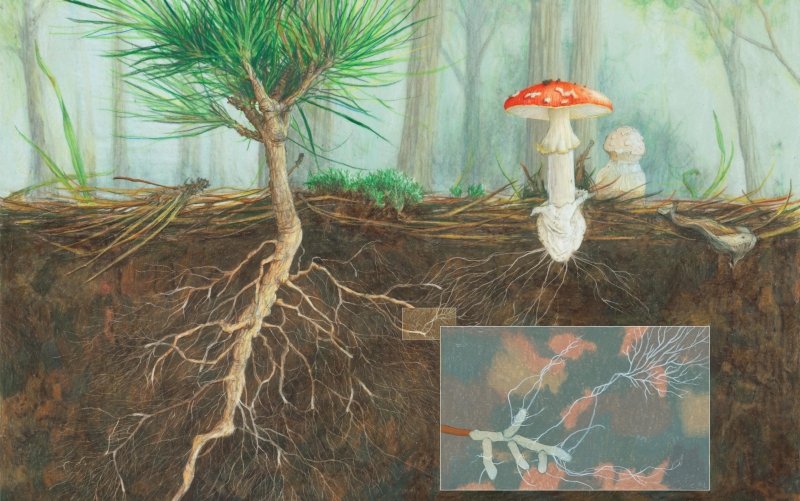 “Why do people bring pine trees into their houses at the winter solstice, placing brightly colored (red-and-white) packages under their boughs, as gifts to show their love for each other …?” he wrote. “It is because, underneath the pine bough is the exact location where one would find this ‘Most Sacred’ substance, the Amanita muscaria, in the wild.” (Note: Do not eat these mushrooms, as they can be poisonous.) 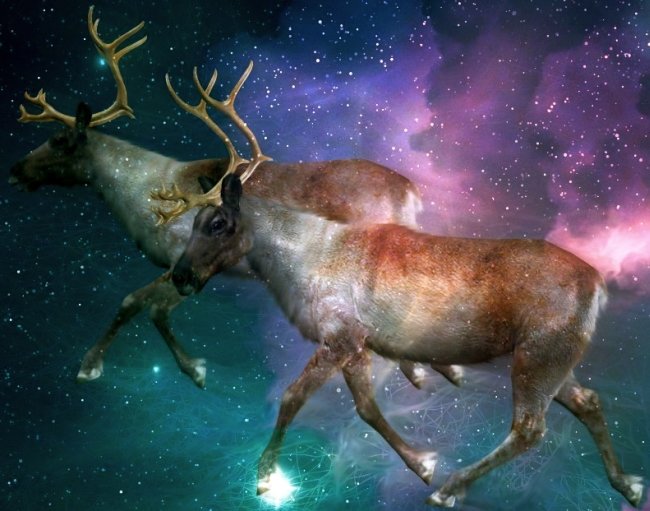 Reindeer are common in Siberia and northern Europe, and seek out these hallucinogenic fungi, as the area’s human inhabitants have also been known to do. Donald Pfister, a Harvard University biologist who studies fungi, suggests that Siberian tribesmen who ingested fly agaric may have hallucinated that the grazing reindeer were flying.

“At first glance, one thinks it’s ridiculous, but it’s not,” said Carl Ruck, a professor of classics at Boston University. “Whoever heard of reindeer flying? I think it’s becoming general knowledge that Santa is taking a ‘trip’ with his reindeer.” [6 Surprising Facts About Reindeer]

“Amongst the Siberian shamans, you have an animal spirit you can journey with in your vision quest,” Ruck continued. “And reindeer are common and familiar to people in eastern Siberia.” 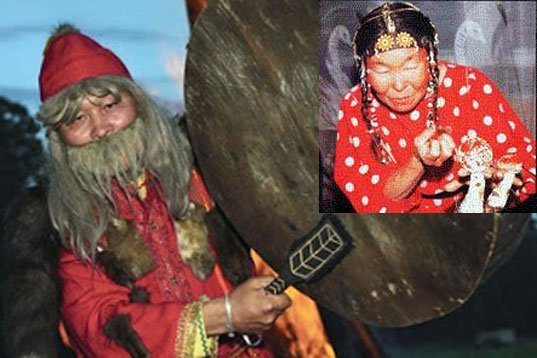 These shamans “also have a tradition of dressing up like the [mushroom] … they dress up in red suits with white spots,” Ruck said. 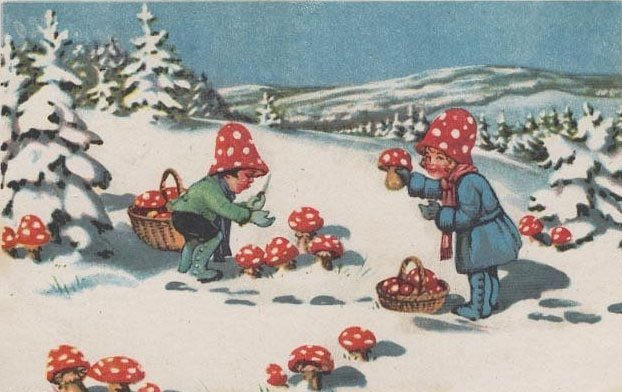 Tree ornaments shaped like Amanita mushrooms and other depictions of the fungi are also prevalent in Christmas decorations throughout the world, particularly in Scandinavia and northern Europe, Pfister pointed out. That said, Pfister made it clear that the connection between modern-day Christmas and the ancestral practice of eating mushrooms is a coincidence, and he doesn’t know about any direct link. [5 Surprising Facts About Christmas]

Ruck points to Rudolph as another example of the mushroom imagery resurfacing: His nose looks exactly like a red mushroom. “It’s amazing that a reindeer with a red-mushroom nose is at the head, leading the others,” he said.

Many of these traditions were merged or projected upon St. Nicholas, a fourth-century saint known for his generosity, as the story goes.

There is little debate about the consumption of mushrooms by Arctic and Siberian tribespeople and shamans, but the connection to Christmas traditions is more tenuous, or “mysterious,” as Ruck put it.

7. “A Visit from St. Nicholas” may have borrowed from shaman rituals.

Many of the modern details of the modern-day American Santa Claus come from the 1823 poem “A Visit from St. Nicholas” (which later became famous as “‘Twas the Night Before Christmas”). The poem is credited to Clement Clarke Moore, an aristocratic academic who lived in New York City.

The origins of Moore’s vision are unclear, although Arthur, Rush and Ruck all think the poet probably drew from northern European motifs that derive from Siberian or Arctic shamanic traditions. At the very least, Arthur wrote, Santa’s sleigh and reindeer are probably references to various related northern European mythology. For example, the Norse god Thor (known in German as Donner) flew in a chariot drawn by two goats, which have been replaced in the modern retelling by Santa’s reindeer, Arthur wrote.

Other historians were unaware of a connection between Santa and shamans or magic mushrooms, including Stephen Nissenbaum, who wrote a book about the origins of Christmas traditions, and Penne Restad, of the University of Texas at Austin, both of whom were contacted by LiveScience.

8. Santa is from the Arctic. 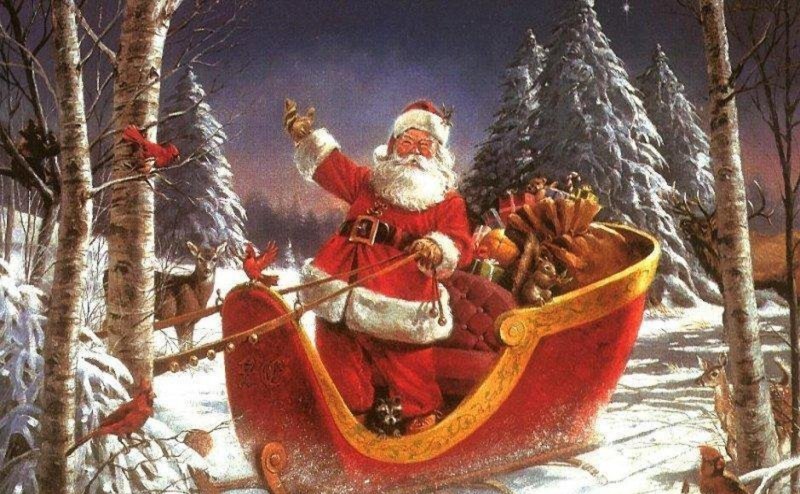 One historian, Ronald Hutton, told NPR that the theory of a mushroom-Santa connection is flawed. “If you look at the evidence of Siberian shamanism, which I’ve done,” Hutton said, “you find that shamans didn’t travel by sleigh, didn’t usually deal with reindeer spirits, very rarely took the mushrooms to get trances, didn’t have red-and-white clothes.”

But Rush and Ruck disagree, saying shamans did deal with reindeer spirits and the ingestion of mushrooms is well documented. Siberian shamans did wear red deer pelts, but the coloring of Santa’s garb is mainly meant to mirror the coloring of Amanita mushrooms, Rush added. As for sleighs, the point isn’t the exact mode of travel, but that the “trip” involves transportation to a different, celestial realm, Rush said. Sometimes people would also drink the urine of the shaman or the reindeer, as the hallucinogenic compounds are excreted this way, without some of the harmful chemicals present in the fungi (which are broken down by the shaman or the reindeer), Rush said.

“People who know about shamanism accept this story,” Ruck said. “Is there any other reason that Santa lives in the North Pole? It is a tradition that can be traced back to Siberia.”

This article has been republished from Live Science