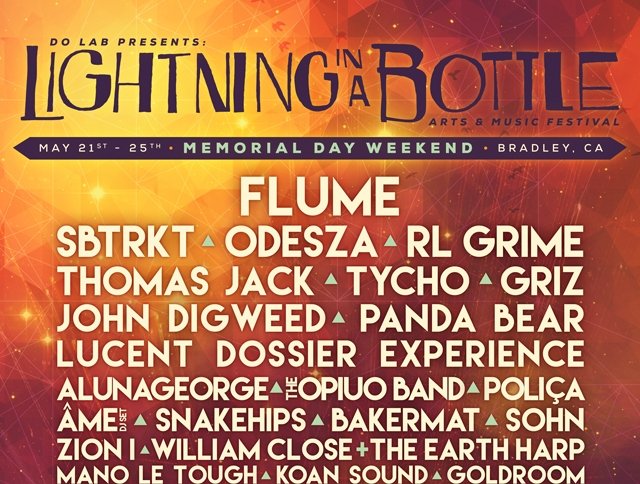 A talented corp of house musicians is highlighted by Germany’s Ame, emerging Australian DJ Thomas Jack, UK legend John Digweed, Shiba San and Bakermat and many more. Bass enthusiasts will be pleased to see GRiZ, The Opiuo Band, Zion I and KOAN Sound on the roster. Indie favorites Made In Heights, Polica, Active Child, Les Sins (side project of Toro y Moi) and SOHN will also take the stage, while festival mainstays like Lucent Dossier Experience, Random Rab, and The Human Experience return for Lightning in a Bottle 2015.

In addition to world-class music, Lightning in a Bottle is also known for its mesmerizing stage designs, stellar performance art and one-of-a-kind art installations alongside opportunities to engage with yoga and dance classes, motivational speakers, and health-conscious workshops. These are held at the festival sanctuaries – The Temple of Consciousness, The Village, and The Learning Kitchen – and create an overall sense of connection making Lightning in a Bottle one of the most innovative and beloved festivals on the planet.

Lightning in a Bottle, or LIB for short, sets the standard as the most environmentally conscious festival in America. It has received the Outstanding Award four years running from A Greener Festival for its healthy food vendors, free water stations, composting and recycling infrastructure, pack-it-in/pack-it-out policy and other green initiatives. This year will also see other improvements including additional large-scale shade structures, upgraded boutique camping packages, bigger installations and a new festival layout design to ease and enhance everyone’s LIB experience!

Tickets are on sale now at Lightning in a Bottle’s website. Full weekend passes start at $260.

New for LiB 2015: A “Redefined” Lucent Temple of Consciousness 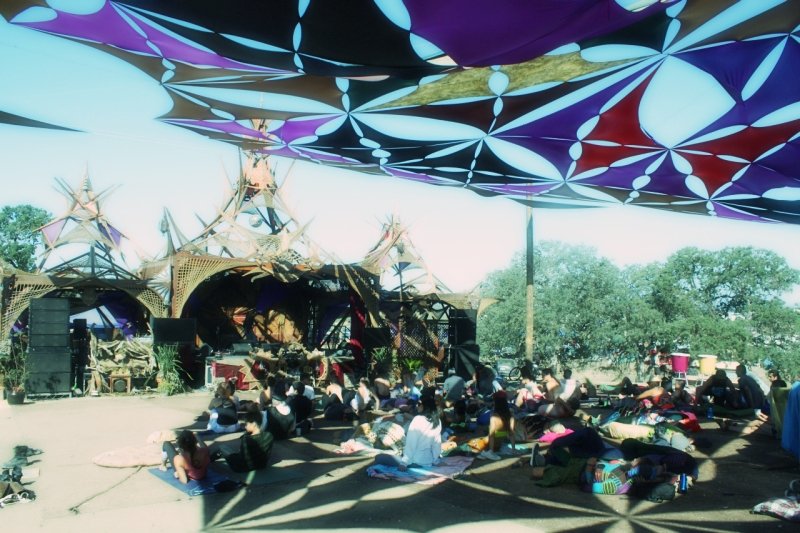 Lightning in a Bottle music and arts festival forges ahead with fantastic updates to The Lucent Temple of Consciousness, an area dedicated to festivalgoers achieving transformative experiences through holistic lectures, workshops, yoga and movement. Among the improvements are a new on-site structure, expanded learning kitchen, world-class lecturers, and an inaugural May 3rd pre-event in downtown Los Angeles.

The tenth annual Lightning in a Bottle returns Memorial Day Weekend (May 21 – 25, 2015) to the San Antonio Recreation Area in Bradley, CA, with a lineup that includes Flume, SBTRKT, Panda Bear, Odesza, RL Grime, and over 300 more musicians and artists. Throughout the weekend, attendees will enjoy the festival’s groundbreaking and redefined Lucent Temple of Consciousness. The Temple’s main stage has been completely redesigned into a fully shaded Bedouin tent with performances by music artists Mia Doi Todd, Marques Wyatt, Beautiful Chorus, and Babes. Adjacent structures will house the expanded Learning Kitchen, Healing Sanctuary, workshops, yoga, and movement classes. On Sunday, May 25th, historia Roger Steffens presents the life and music of Bob Marley followed by an afternoon reggae dance celebration.

Ecstatic Dance and Contact Improv, which include DJs and instructors of free form movement and a spiritual awakening for the body, will feature Shaman’s Dream with Rana Satori,Ryan Herr with Eva Clay,Rara Avis with Tyler Blank, and Cuttarug with Seti Devi.

On May 3rd, 2015, the inaugural Lucent Temple of Consciousness Pre-Event in Los Angeles will be a 12-hour urban retreat to activate your body, expand your mind, and open your heart. For the first time ever, the Temple’s transformational experience begins three weeks prior to the actual festival itself. For details, visit the Pre-Event’s Facebook page and RSVP to stay in the loop!