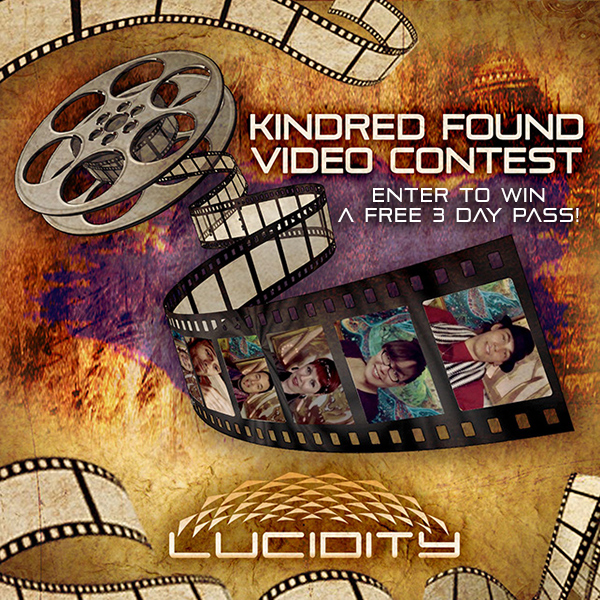 Lucidity Festival, a conscious gathering based in Southern California, is offering a free ticket to the winner of the ‘Kindred Found’ Video Contest. The Festival is putting out the call to its wide community of creative participants to record an invitation to a member of their kindred circle to join them at Lucidity, April 10–12, 2015 at the majestic Live Oak Campground, nestled in the Santa Ynez Mountains. The contest video entry which garners the most community votes will win a free ticket, valued at over $250.

The contest is simple: tell the world what you love about Lucidity and invite an important person in your life to share the Lucidity experience with you! The video with the most votes on March 30th at 11:59 PST will receive a FREE three-day pass to Lucidity Festival 2015.

No need to be a video producer or editor to win this contest. A simple smartphone with a camera will do the trick. Make sure your audio is clear and there is minimal background noise. Record your video in a horizontal position, and keep it between 1 to 3 minutes for the best results. Most importantly, have fun and be creative!

About This Year’s Theme

This year’s theme, Kindred Quest, marks the fourth iteration of an event built around a communal Six Year Story Arc. Kindred Quest celebrates the roots of family values, shared ancestry and cultural tradition of the interconnected community of families, artists, cultural wisdom keepers, entrepreneurs, earth stewards and more. The mythos draws from, among other things, Joseph Campbell’s concept of The Hero’s Journey: “A hero ventures forth from the world of common day into a region of supernatural wonder: fabulous forces are there encountered and a decisive victory is won: the hero comes back from this mysterious adventure with the power to bestow boons on his fellow man.”