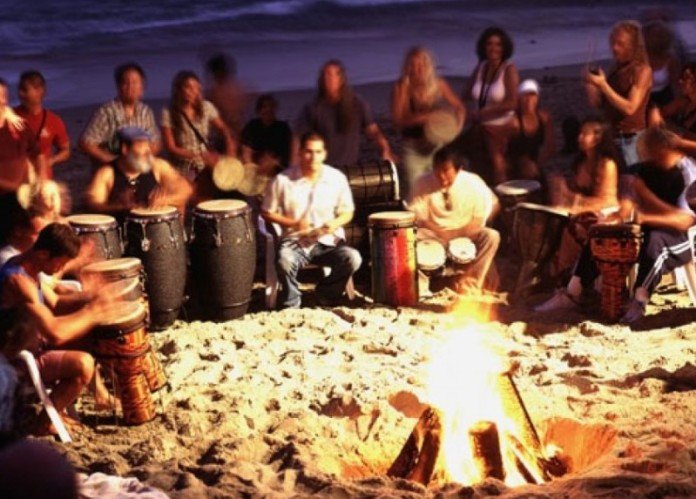 From slowing the decline in fatal brain disease, to generating a sense of oneness with one another and the universe, drumming’s physical and spiritual health benefits may be as old as time itself.

Drumming is as fundamental a form of human expression as speaking, and likely emerged long before humans even developed the capability of using the lips, tongue and vocal organs as instruments of communication.

To understand the transformative power of drumming you really must experience it, which is something I have had the great pleasure of doing now for twenty years. The below video is one of the circles I helped organize in Naples Florida back in 2008, which may give you a taste of how spontaneous and immensely creative a thing it is (I’m the long haired ‘hippie’ with the gray tank top drumming like a primate in the background).

Anyone who has participated in a drum circle, or who has borne witness to one with an open and curious mind, knows that the rhythmic entrainment of the senses and the anonymous though highly intimate sense of community generated that follows immersion in one, harkens back to a time long gone, where tribal consciousness preempted that of self-contained, ego-centric individuals, and where a direct and simultaneous experience of deep transcendence and immanence was not an extraordinarily rare occurrence as it is today.

This experience is so hard-wired into our biological, social and spiritual DNA that even preschool children as young as 2.5 years appear to be born with the ability to synchronize body movements to external acoustic beats when presented in a social context, revealing that drumming is an inborn capability and archetypal social activity.

Even Bugs Know How To Drum

But drumming is not a distinctively human technology. The use of percussion as a form of musicality, communication, and social organization, is believed to stretch as far back as 8 million years ago to the last common ancestor of gorillas, chimpanzees and humans living somewhere in the forests of Africa.

For instance, recent research on the drumming behavior of macaque monkeys indicates that the brain regions preferentially activated by drumming sounds or by vocalizations overlap in caudal auditory cortex and amygdala, which suggests “a common origin of primate vocal and nonvocal communication systems and support the notion of a gestural origin of speech and music.”

Interestingly, percussive sound-making (drumming) can be observed in certain species of birds, rodents and insects.  Of course you know about the woodpecker’s characteristic pecking, but did you know that mice often drum with their feet in particular locations within their burrow, both for territorial displays and to sound alarms against predators? Did you know that termites use vibrational drumming signals to communicate within the hive? For instance, soldiers threatened with attack drum their heads against tunnels to transmit signals along subterranean galleries, warning workers and other soldiers to respond accordingly.  See the video below for an example of termite drumming.

Even more amazing is the fact that wasps appear to use antennal drumming to alter the caste development or phenotype of their larvae. Conventional thinking has held for quite some time that differential nutrition alone accounted for why one larvae develops into a non-reproductive worker and one into a reproductive female (gyne).  This is not the case, according to a 2011 study:

“But nutrition level alone cannot explain how the first few females to be produced in a colony develop rapidly yet have small body sizes and worker phenotypes. Here, we provide evidence that a mechanical signal biases caste toward a worker phenotype. In Polistes fuscatus, the signal takes the form of antennal drumming (AD), wherein a female trills her antennae synchronously on the rims of nest cells while feeding prey-liquid to larvae. The frequency of AD occurrence is high early in the colony cycle, when larvae destined to become workers are being reared, and low late in the cycle, when gynes are being reared. Subjecting gyne-destined brood to simulated AD-frequency vibrations caused them to emerge as adults with reduced fat stores, a worker trait. This suggests that AD influences the larval developmental trajectory by inhibiting a physiological element that is necessary to trigger diapause, a gyne trait.”

This finding indicates that the acoustic signals produced through drumming within certain species carry biologically meaningful information (literally: ‘to put form into’) that operate epigenetically (i.e. working outside or above the genome to effect gene expression).

This raises the question: is there ancient, biologically and psychospiritually meaningful information contained within drum patterns passed down to us from our distant ancestors? Could some of these rhythms contain epigenetic information that affect both the structure (conformation) and function of biomolecules and biologically meaningful energetic/information patterns in our body? If so, this would mean these ancient patterns of sound could be considered “epigenetic inheritance systems” as relevant to DNA expression as methyl donors like folate and betaine and not unlike grandmother’s recipe (recipe literally means “medical prescription” in French) for chicken soup that still adds the perfect set of chemistries and information specific to your body to help you overcome the common cold or bring you back from fatigue.

We do have some compelling evidence from human clinical and observational studies on the power of drumming to affect positive change both physically and psychologically, seemingly indicating the answer to our question about the biological role of acoustic information in modulating micro and macro physiological processes in a meaningful way is YES.

Drumming has been proven in human clinical research to do the following six things:

Taking into account the beneficial evolutionary role that drumming likely performed in human history and prehistory, as well as the new scientific research confirming its psychosocial and physiological health benefits, we hope that it will be increasingly looked at as a positive medical, social and psychospiritual intervention. Considering the term recreation in its root etymological sense: re-creation, drumming may enable us to both tap into the root sense of our identity in the drumming-mediated experience of being joyous, connected and connecting, creative beings, as well as find a way to engage the process of becoming, transformation and re-creation that is also a hallmark feature of being alive and well in this amazing, ever-changing universe of ours.

New to drumming and want to try it?

Fortunately, drum circles have sprouted up in thousands of locations around the country spontaneously, and almost all of them are free. You will find them attended by all ages, all walks of life and all experience levels. The best way to find one is Google the name of your area and “drum circle” and see what comes up. Also, there is an online directory that lists drum circles around the country here. Looking for a drum set? There’s plenty to choose from.

Sayer Ji is an author, educator, Steering Committee Member of the Global GMO-Free Coalition (GGFC), advisory board member of the National Health Federation, and the founder of GreenMedInfo.com – an open access, evidence-based resource supporting natural and integrative modalities. His writings have been published and referenced widely in print and online, including Truthout, Mercola.com, The Journal of Gluten Sensitivity, New York Times and The Well Being Journal.

In 1995 Sayer received a BA degree in Philosophy from Rutgers University, where he studied under the American philosopher Dr. Bruce W. Wilshire, with a focus on the philosophy of science. In 1996, following residency at the Zen Mountain Monastery in upstate New York, he embarked on a 5 year journey of service as a counsellor-teacher and wilderness therapy specialist for various organizations that serve underprivileged and/or adjudicated populations. Since 2003, Sayer has served as a patient advocate and an educator and consultant for the natural health and wellness field.