On Saturday, the 2015 Shambhala Music Festival finished a week-long daily roll out of six individual stage lineup announcements (see our unveiling here).  Unlike other festivals, Shambhala’s six stages are each curated and independently run by their own respective stage directors, who in most cases are tastemakers in the Canadian music scene who have been returning to the festival for more than a decade. Check out the newly released 2014 recap video here, which showcases the festival in all its neon-soaked, utopian beauty.

Now in its unprecedented 18th year, the Shambhala Music Festival returns to the immaculate Salmo River Valley on August 7-10, 2015 where the Canadian electronic music and camping festival is pleased to host 300-plus artists to round out an explosive bill.  Distinct with contrasting music styles, sound systems, environments, and ambiance, Shambhala’s The Village, Fractal Forest, The Living Room, Amphitheatre, The Grove, and Pagoda stages will take on a life all their own through next level audiovisual experiences.

Described as a “supernatural, sci-fi, Tiki town,” The Village features tree forts interconnected by catwalks and bridges surrounding the dance floor. Festival goers can enjoy DJ’s, breakdancers, performance art, turntablists, MC’s, and aerialists through 200,000 watts of premium vibrations supplied by PK Sound.  Skrillex, KOAN Sound, Lucent Dossier Experience, Big Gigantic, and returning favorite DATSIK will be joined by over 30 more artists to bring on the rumbling bass of everything from glitch, grime, and drum’n’bass, to dubstep, trap, hip-hop, electro, and ragga jungle, alongside phenomenal performance troupes, and everything in between.

Pyramids, flowers, and friendly forest creatures shape the enchanted Fractal Forest, where DJs play in the heart of a burnt out old-growth cedar tree stump, surrounded by a 360 degree immersive, interactive environment featuring the most beautiful dancers on the planet.  This year’s Fractal Forest will pay homage to old school hip-hop and house when they host Mix Master Mike of the Beastie Boys, DJ Jazzy Jeff, and over 40-plus performers for what has been dubbed the “funkiest show on earth”.

The only non-permanent stage and often referred to as the “comfort space” of the festival, The Living Room provides a variety of global genres and electronic soundscapes ranging from the deepest of dub and downtempo, to zouk bass, disco funk, groovy house, and Latin flavors. This year, DJ Harvey and Tipper (who will perform not just one, but two sets over the weekend) will appear alongside 60-plus performance artists and visualists at The Living Roomstage.

The Amphitheatre is perhaps the most eclectic of all the stages, running the gamut of bass-driven music,  from trap to future bass, funk, world bass, and more. Known affectionately as “The Amp”, the Amphitheatre will feature artists such as Mr. Carmack and CRNKN plus over 40 MCs and performers, promising the most insane mix of hybrid trap and bass music ever heard.

The fest’s newest stage, The Grove, is a fully immersive, ever-changing creative space featuring conscious, mind-expanding workshops and live painters during the day.  At night, the stage is transformed by a vibrant lineup of world bass music, glitch hop, deep dubstep, and garage acts. The Grove will feature DJ sets by Bonobo and Tipper with Android Jones on visual duty for a total of over 50 performances throughout the weekend.Boasting plenty of relaxing chill zones and a welcoming dance floor, The Grove features state-of-the-art lighting and visuals in conjunction with a full spectrum sound system, providing the perfect landscape for live performance art and musical acts.

Standing boldly as Shambhala Music Festival’s main attraction, The Pagoda stage consistently pushes sensory boundaries while triumphantly touting top notch global talent.  Known for its loyalty to dance music, The Pagoda promises an interstellar, audiovisual feast as transforms into a mecca of music and a cacophony of sound.  Legends in west coast bass, funky house, and disco, and tropical house will be banging it out with sets from artists like Claude VonStroke, Pretty Lights, Kygo, Griz, Thomas Jack, MK, Dusky, and over 30 more performers including one yet to be announced mystery guest!  This year, the stage is enlisting more renovations, art, lights, decor, sound and video mapping than ever before for the dancing adventure of a lifetime.

Shambhala Music Festival’s permanent home has evolved and scaled over the years, introducing inspiring transformations to its infrastructure to ensure a healthy, sustainable environment.  Last year, some 11,000 people made the trek to the majestic Salmo River Ranch tucked away within an evergreen forest beneath breathtaking peaks, making Shambhala the largest city in British Columbia’s West Kootenay region for the weekend. 2014 headliner, Bassnectar, called last year “the best Shambhala ever!”

Tickets are on sale now at the Shambhala Music Festival website.  Early bird tickets are sold out but full weekend passes are still available for $365 with various add-on camping packages also available. Early entry is also available beginning Wednesday August 5th for an additional charge per guidelines here. The festival sold out last year and tickets for this year will go quickly. 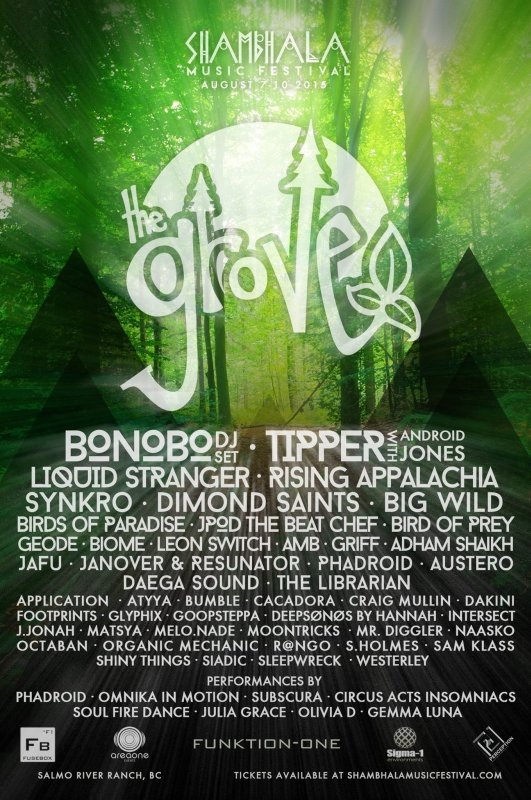