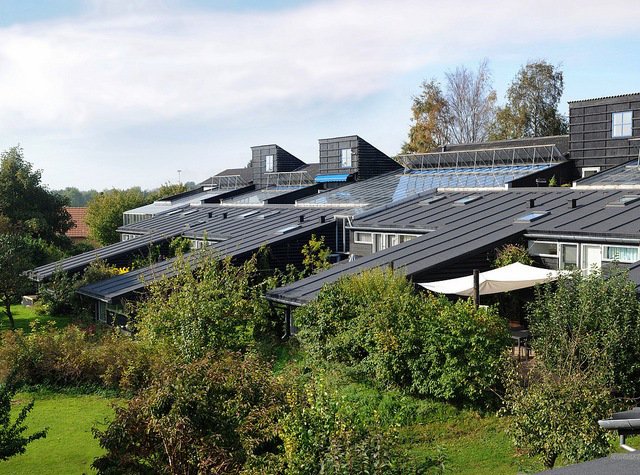 Through two years of research, Ruth Hayward and Jenny Pickerill have found 10 potential pitfalls in community-led housing projects, offering their advice to overcome these situations.

Increasing numbers of people are interested in developing community self build projects around the world. In the UK inspirational projects include LILAC (Leeds), Hockerton Housing Project (Nottinghamshire), Springhill Co-Housing (Stroud), Hedgehog (Brighton) and Lancaster Co-Housing (Lancaster). These ground breaking projects are sites of learning and knowledge sharing: about ecological building practices, challenging market models, collaborative consumption and how to live in community.

Although there is a demand for more of these projects, and many groups start out on the journey to build a housing project together, many of them do not succeed. Despite great enthusiasm, often having financial capital available and good sharing of information and knowledge, many groups face multiple setbacks that can lead to the groups breaking down before a site is purchased. Indeed many people involved in now successful projects have endured multiple failures on their journey through community custom-building.

We have spent two years researching the setbacks and potential pitfalls that groups face; we hope that through understanding them better, they can be avoided or at least managed better, and people’s valuable energy and goodwill can be better used. We worked with six groups who are either about to start building or failed to reach the building stage. This included three co-housing projects, a co-operative, an eco-community, and action research with an emerging group. We collected data through interviews with multiple members of each group. For the emerging group we also asked participants to keep diaries of the process that we then analysed. From this we have identified ten potential pitfalls in community-led housing, which help identify what makes groups successful.

By Ruth Hayward and Jenny Pickerill

1. The Need for Entrepreneurial Drive

Building collectively requires an entrepreneurial spirit – a capacity to deal with finances, plans, bureaucracy, objectors etc. It needs people who are determined to make a project happen and therefore to drive it through to completion. This spirit however, also means that opportunities are grasped when they come along, maybe before the group is ready. When a site is found, this can change everything for a group. Although having a site gives a clear project around which to form a ‘vision’ and draw up plans, it is really important not to go so fast that necessary group processes get sidelined or ignored, as this may trip groups up further down the line. Other groups have their processes fine-tuned by the time they find the site they are able to buy, but take years in the process. There is a balance then between embracing the entrepreneurial drive and developing group structures.

The need for this entrepreneurial spirit means that groups are full of initiators, people with lots of skills and passion, who also tend to be strong characters. This is a good thing, and necessary, but it can result in quite serious personality clashes and differences in approach that can result in groups splitting up. Part of accommodating strong characters is a need to cope with disagreements and unruliness without it threatening the functioning of the group. One interviewee argued, “… there are some conflicts that you just have to live with”. Avoiding disagreements entirely does not strengthen the group, instead it is necessary to create space to discuss, resolve or simply acknowledge intractable differences.

While strong characters can help move a group forward, disruptive personalities can undermine the ability of people to work well together. Few groups had strategies for how to respond to this. Without some ways in which to minimise the disruption, people who you would like to keep in your group will walk away, probably without telling you why. If you are in a group that works well, then develop a membership policy to help it stay like that. For others there needs to be a conflict resolution policy. As Diana Leafe Christian argues, you need to ‘select for emotional maturity’ (2003, 8) when choosing new members. Also, everyone involved can ask themselves periodically, ‘is my behaviour helping or hindering the process?’

Clashes between strong characters are often linked to feelings of ownership of the group and its processes. Without these feelings a group would not progress; these feelings are necessary to move such complex projects forward. However, group initiators need to ensure that new people’s energies, skills and suggestions are valued. This can be helped by having group processes that are transparent to newcomers. On the other hand, if you are new to a group, be aware that ‘those who organise’ may feel threatened by you, especially if you bring a lot of knowledge, experience and a group of your own friends with you. The rewards to both parties if they can communicate well are self evident – a better chance of the project’s eventual success.

People who feel ownership also tend to be the ‘organising forces’ in any group, those people who identify and take on tasks. Although they may appear indomitable, they are human and need to feel supported. Although this work will be appreciated by many in the group it may not be by everyone and tensions can evolve around perceived power structures. There is also the risk that an enthusiastic organiser may lead the group in a direction that not everyone has signed up to. Again, having agreed processes will reduce this risk.

There are often tensions around (and between) those people in a group who are perceived to have particular knowledge relevant to a community build project. We found examples of people with expertise, either professional or experiential, self-censoring their contributions in an effort to underplay their expertise, as well as examples of when they were seen by other group members as being elitist in asserting this knowledge.

Completing a skills audit of all kinds of skills (professional or experiential) helps identify, name and use the skills available in a group. Naming these skills can also reduce the potential for people with knowledge to compete, instead accepting others’ areas of expertise and seeking to work with and compliment others in the group. This could also help with incorporating and valuing newcomers to the group.

5. Housing is Personal! Be Prepared!

Housing is personal, which is why it is hard to remain emotionally detached from decisions that are made, conflicts that may arise, and setbacks such as losing a site you had set your heart on. The emotional impact of the process needs to be understood; one interviewee said, “I’m exhausted, I’m going broke, I’m quite anxious.” Realising that everyone in the room is more emotionally engaged with the process than perhaps they would be at work may help people to be more gentle with each other.

There was also a general reticence about excluding people from housing projects and yet part of the process always requires delimiting who might move in. As one interviewee said they were “… going to have to learn to say no to some people”.

Building trust between strangers takes considerable time, but is necessary to enable all members to commit to living together and to actively participate in decisions. For many it is necessary to “… get the group right first, and then perhaps the project” and “… it’s better to start with who you want to live with. Create a vision, and then invite other people to join you, rather than trying to do it the other way around, which doesn’t work”. This includes thinking carefully about what other partner organisations, like housing associations, you might want to work with and how to build trust with them.

With all the doom and gloom above, really value the people in your group who bring humour and laughter. It is possible to have fun at meetings. Although there is difference of opinion in having children at meetings, having a small toddler around can help make people smile.

Some groups spend too long celebrating points of commonality, or fail to discuss the details. In talking about differences, such discussions can illuminate where people understand co-operative working or co-housing in very different ways. This approach also enables members to recognise the possibility of different perspectives and the value of diversity, or of gender, race and age dynamics that might be uncomfortable for some. Finding points of difference can sometimes lead people to realise they wanted different things from a project (information, contacts, friendship) and not necessarily to live together.

We discovered that for some groups, irregular attendance of participants at meetings resulted in a lack of consistency from one meeting to another. This affected the dynamics, progress and commitment of other members of the group. Some suggested that members needed to commit to regular attendance (such as two hours every fortnight) or to have a process of annual membership renewal. As one interviewee argued, “… you can’t really create a vision out of an amorphous group”. In trying to be democratic, inclusive and grassroots, many groups did not start with a clear purpose for their community self-build project. While this exploratory open approach allowed for lots of ideas to be explored, it also used up a great deal of time and energy without making any progress. Starting with a focus and purpose, for example, to build an urban senior co-housing community or a rural low impact development, provides participants with a strong starting point.

You are putting the time and energy in as you have a vision of how you want to do things differently. This may be around environmental principles, intergenerational living or having an autonomous community. If you are working with other partners, perhaps a housing association or a community land trust, or when you get to planning, you will find that you have to compromise. In order to make the project happen some compromises will be acceptable. However, if you have become very involved in trying to get a project off the ground, and in the process have made such compromises that your original vision is not recognisable, then you need to step back and take an honest look at what you are signing up to. It may be best to pull out. Having robust group processes in place should prevent you from getting pulled into sites and projects that ultimately the group is not happy with.

Many groups we worked with either navigated these difficult areas (albeit loosing some members along the way) or went on to be part of other successful projects. We hope that by sharing these learning experiences that the process will be easier in the future and many other groups will go on to build new community housing.

* See CoHousing: A new Tradition of Neighbourly Living for more detailed information on how to work with housing associations.

This article has been republished from Permaculture
About the Author

Ruth Hayward works as a freelance environmental organizer, researcher and network facilitator. She co-developed the Living for the Future initiative to encourage and support co-housing and other low impact housing initiatives in the North East of England. Jenny Pickerill is a Professor of Environmental Geography at the University of Sheffield. She has recently completed a book on how affordable eco-housing is being built worldwide.