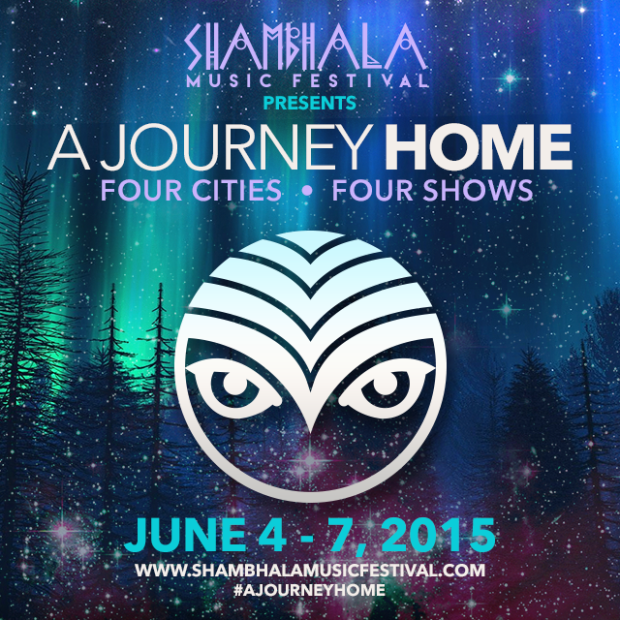 Anticipation is building for the 18th Annual Shambhala Music Festival to be held in Salmo River Ranch, August 7-10th, 2015. With an unparallelled line-up and a breathtaking venue, Shambhala’s ‘Are We There Yet’ video invites electronic music lovers to come Home to enjoy warm sunshine, cool waters, eclectic rhythms, and the unmistakeable magic of being surrounded by thousands of friends, new and old.

Scenes of enchanted wilderness are interweaved with blissful dancing and glimpses of stunning, cutting-edge stage production, as well as music by festival performers, Camo & Krooked. Love the video? Check out Shambhala’s full 2014 Official Afterstory video and get amped up with Shambhala’s mix series featuring festival talent such as jackLNDN, jOBOT, and M!NT. The next mix will feature UK jack house and bass experts, Cause & Affect.

A series of pre-parties will also take place across Canada with the ‘A Journey HOME’ tour, June 4-7, 2015 in Vancouver, Kelowna, Calgary and Nelson. Get more info on the website or on Facebook.

Shambhala Music Festival is just around the corner and interested attendees are encouraged to purchase tickets soon as cut off dates for shipping are fast approaching (June 1 for the U.S. and July 1st for Canada) and tickets are expected to sell out quickly. Tickets sold after the shipping date cutoff will be available for pick up at will call.

Music courtesy of: Hospital Records / Songs In The Key Of Knife:

Camo & Krooked – Move Around (feat. Ian Shaw) (Hospital Records UK) (Buy)
‘Are We There Yet?’ was produced by Sweetgrass Productions

Shambhala Music Festival returns on August 7-10, 2015 to the immaculate Salmo River Valley in the emerald forests of the Selkirk Mountains in Canada. In its unprecedented 18th year, the Canadian electronic music and camping festival features headliners Kygo, Pretty Lights, Bonobo, Claude VonStroke and Skrillex among 300 other musicians in its 2015 lineup.

RSVP on Facebook and reconnect with your family from the farm!