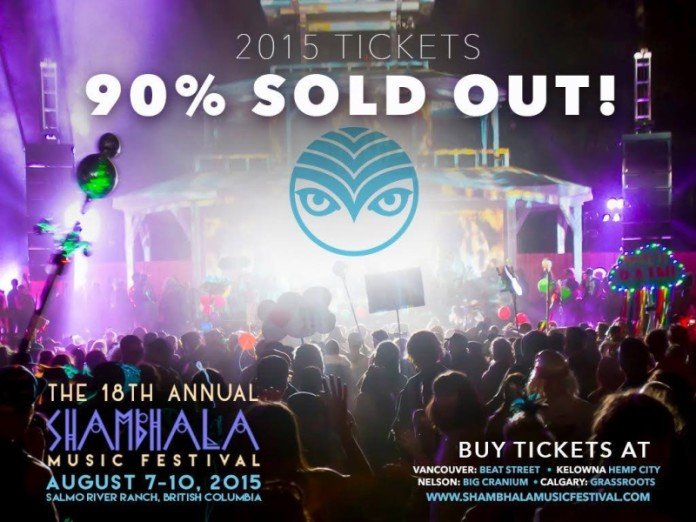 On the cusp of selling out, Shambhala Music Festival releases its 2015 Mix Series and artist schedule so participants can start to plan their optimal festival experience.  With over 300 musicians across six unique stages, festival goers can hope to catch artists such as Kygo, Pretty Lights, Bonobo, Skrillex, Claude VonStroke, KOAN Sound, Tipper, DJ Harvey, Lucent Dossier Experience, Mix Master Mike and DJ Jazzy Jeff at the festival later this Summer. Tickets are going fast with the festival having already hit the 90% Sold Out mark. If you want to experience the magic of Shambhala Music Festival 2015 in the gorgeous Kootenay Mountains and Salmo river, buy your ticket today.

Shambhala also recently launched their highly anticipated SMF 2015 Mix Series featuring a compilation of exclusive mixes from this year’s lineup of world-class festival talent.  Download and share the 2015 Mix Series to familiarize yourself with some of the artists performing at Shambhala this August.

There have been seven mixes released to-date with a 808/trap set from Brooklyn’s M!NT, a smooth house set from UK’s jackLNDN, a low end-centric, rap-influenced mix from Victoria’s Pigeon Hole, a party rock mix from Vancouver’s Wood n Soo, a bass heavy mix from LA’s MORiLLO, a funky mix of house, disco, breaks, and hip hop beats from Vancouver’s Spilt Milk, and a bass-heavy mix of glitchy funk courtesy of LA’s jOBOT.

This week, the UK’s Cause & Affect have assembled a stellar mix featuring unreleased tracks from themselves and a who’s who of the UK club scene. Check out Chris Lorenzo and production partner Kane as they hit the Pagoda stage as Cause & Affect – an act that has been bouncing from strength to strength as of late, including their summer anthem “Another Time” ft. Jamie George, which recently premiered on Complex UK.

Check back for upcoming releases in the mix series including AMB, Thornato, Freddy J, Sam Demoe and more to come.  And visit the Artist Profiles on the Shambhala website to learn more about all of the artists who will be performing at Shambhala Music Festival 2015


Shambhala Music Festival returns on August 7-10, 2015 to the immaculate Salmo River Valley in the the emerald forests of the Selkirk Mountains in Canada. In its unprecedented 18th year, the Canadian electronic music and camping festival features headliners Kygo, Pretty Lights, Bonobo, Claude VonStroke, Skrillex, Harvey, Tipper, and Lucent Dossier Experience among 300 other musicians in its 2015 lineup.

RSVP on Facebook and reconnect with your family from the farm!

Tickets are 90% sold out; Purchase your tickets while you can.