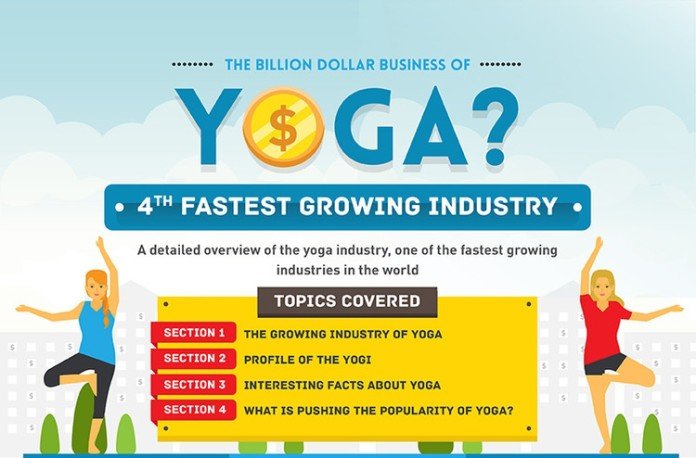 Someone recently sent us this infographic detailing 99 facts about the fast-growing yoga industry which reveals some very interesting, promising, and concerning aspects of what has become a billion dollar business. In order to comment on it concisely, we’re going to break down the infographic into sections. 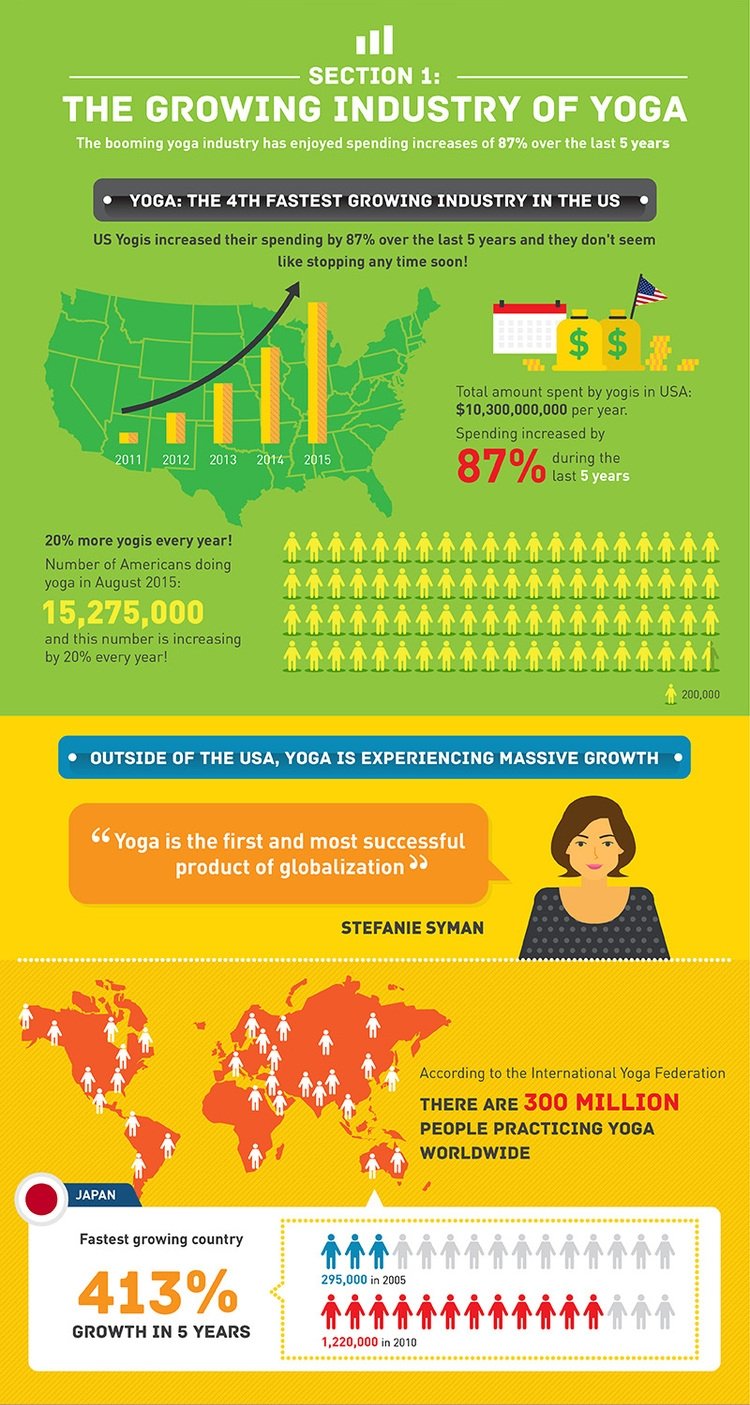 In the United States alone there are approximately 15 million practitioners of yoga, which comes out to around 5% of the total population. A recent study has found the number to be even higher, at 20 million. If we take a look at the global population, 300 million people people practice yoga currently. To put this in perspective, imagine if everyone in the US made yoga part of their daily routine. The lifestyle changes, behaviors, and personal beliefs would likely shift in ways that are evident in people who have made yoga an integral part of their lives.

With 300 million coming out to around 4% of the global population, that indicates that yoga is still predominantly practiced a majority of the time by certain segments of the population instead of it being uniformly practiced across all demographics. With Japan being singled out as an example of an incredibly fast-growth country when it comes to yoga, this shows there are pockets of practice around the world currently. However, compared to how many people practiced yoga 10 or 20 years ago, it’s incredibly inspiring to see so many people making it a part of their lives and improving their well-being.

Here we can find out about what kind of people are practicing yoga these days, by and large. They are overwhelmingly (82%) female, which is interesting considering that ever since yoga was first practiced around 5,000 years ago it was almost exclusively practiced by men.

It’s only in recent history that yoga became a woman-dominated practice. The origination of this, as I see it, is the Western masculine ego resisting yoga as a result of being afraid of not being flexible or feeling emotionally vulnerable in yoga. Many men also don’t see yoga as a “real” workout. These excuses, as well as others, all stem from the ego feeling that it’s more advantageous to keep its pride than strengthening and enhancing the mind-body-spirit synergy. If you’re a man and you think yoga is something that only woman should practice, you may reconsider after reading this.

A disappointing statistic shows that poor people and those who haven’t gone to college rarely practice yoga. This is another example of a current trend that doesn’t align with the original intention of yoga being a practice for holistic well-being and Self-realization accessible to everyone. As this article points out, the face of yoga in the West is an upscale white woman. This kind of presentation and portayal of yoga and yogis is not an all-encompassing and welcoming image. The yoga world should strive towards promoting itself as being open to anyone and everyone, since we are all human beings and would all benefit from making yoga a part of our daily lives.

Another area of concern that ties into the previous point is that yogis spend alot of money on yoga accessories. In reality, all you need to practice yoga is a space to do it and the knowledge of the asanas/kriyas/techniques. If you want to make it a little more comfortable, you can get a blanket, mat, or something else soft and a book or online videos from a place like Gaia or for free on Youtube.

The most popular brand of yoga clothes is Lululemon, which supports the image of yoga in the West being an exclusive luxury. Not only are clothes from Lululemon expensive to the point of being ridiculous, the company that makes $95 yoga pants is setting a bad and unethical example to others outside of the yoga world, as this article points out. The commercialization of a spiritual practice leads to superficiality and a watering-down of its core principles. It is antithetical and completely misses the point of practicing yoga. It’s not to show off how deep you can stretch in a chic studio wearing the latest sheer Lululemon yoga pants. For a humorous portrayal of this, watch the video below.

In reality, you don’t even need clothes to practice yoga (and for minimum resistance for deepening into a posture you may want to give nude yoga a try), but in places and situations where having something on is socially or seasonally appropriate, any kind of comfortable and loose-fitting clothes should do. Be aware that in an economic system where everything that can turned into a commodity is, yoga is not exempt. Stay empowered and aware that no matter how much something is marketed as being a yoga essential, it is not. Yoga has existed since way before a corporation decided it could produce fancy pants for pennies to the dollar in a third world country and sell them for 100x more in America.

Here we can see that with over 50 different styles of yoga, there’s certainly something for everyone (although styles like Doga seem more of a novelty). Also, considering that the average ashtanga yoga class is under $10, it’s relatively affordable if you would like to be taught by a teacher in a studio.

What’s interesting is that only half of yoga instructors are certified. What this means is that every other teacher of yoga has taken something such as a 200-hour yoga teacher training program and completed it. It was my assumption that every yoga teacher in a studio was certified but it seems only half are! However, this doesn’t necessarily mean that those who are not certified are not qualified to be excellent yoga teachers (Patanjali, the sage who wrote the Yoga Sutras, definitely wasn’t certified).

When looking at why people practice yoga in the first place, the universal response is to improve their well-being. Additionally, with 80% also taking on yoga as a way to exercise, it shows how great of an antidote it is to the sedentary lifestyles we lead in the industrialized world. This is probably a modern priority resulting from working long hours while sitting down or standing in one place all day. It’s difficult to imagine thousands of years ago, on top of all the physical labor people had to do everyday just to have enough to cover their basic needs, they would take on something that made them endure even more physical exertion.

It’s not surprising to see that 3 out of 4 yogis and yoginis see yoga as their spiritual practice. The asanas (the postures you see in yoga) are just one of the Eight Limbs of Yoga. Yoga is not merely a physical workout that is good for your health (but the health benefits are definitely there, and there’s lots of them). Yoga is literally a way of life. For some time in the beginning of the current yoga movement, the focus was almost entirely on just the asana limb of yoga. However, in the past few years there has been a greater encompassing of the other limbs, which is how yoga was intended to be practiced. Yoga, as a spiritual philosophy, extends way past the mat and outside the studio. It expresses itself with how you interact with reality and everything contained within it.

Today, being healthy is promoted everywhere you look. People love things that as early as the 90s were seen as things only small segments of the population (hippies, New Agers, etc) did. Organic food, meditation, yoga, and other things that were even mocked or ridiculed have become ingrained into the social consciousness so deeply that even multinational corporations have begun seeing there is enough of a demand for them to make profits on. It’s great to see the popularity of being holistically healthy and people adding yoga to their health regimen.

With all the stresses of modern life weakening our bodies and minds, something as profoundly beneficial as yoga becoming as popular as it has become, is a significant step in not only a healthy society, but also a consciously evolved world.

Looking at the state of yoga in the world today, we can be reassured that with it exploding in popularity, the future looks to be a healthy and happy one. If current trends continue, over 1 billion people will have made yoga a part of their lives by 2025. This is a phenomenal shift that will reverberate over every aspect of society given yoga transforms how one lives and sees the world.

This info graphic is created by Djina from Strech.nl and uses Dr-Discount as a source.