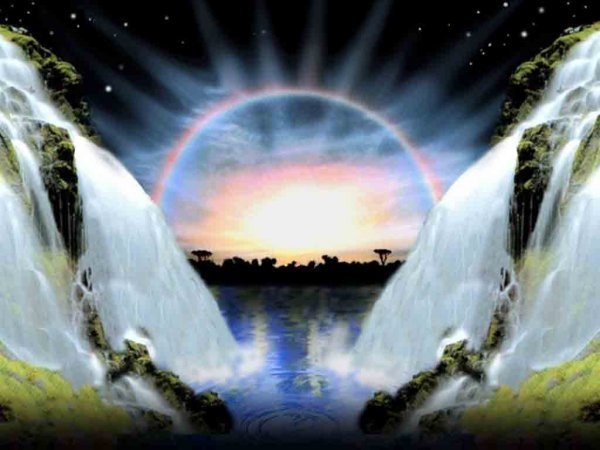 “We will be known forever by the tracks we leave.”

If you are supportive of institutions over individuals, then you better not read this. If you disregard The Native American Rule of Seven Generations, then maybe this article is not for you. If the phrase “fuck war” irritates you because of its ‘foul’ language and not because humanity is still struggling with the devastation of institutional conflict, then I suggest you look for other reading material more appropriate to your refined sensibilities. If you support war as a political means, if you support the idea that peace can only be achieved by force, if you support the profitable status quo upheld by the Demoncats and the Republicons (or whatever leftwing/rightwing paradigm you currently are under) then move on. If you oppose the notion of real change, of social revolution (just as you’ve been taught to) then you might as well stop right here.

If, on the other hand, this sentiment inspires you, if the foulness of war makes such expletives as “fuck war” seem a reasonable use of language, then I hope you’ll read on.

The Native Americans saw the European newcomers as being spiritually afflicted. There were probably many descriptions for this craze, but one that survived is Wendigo. Roughly translated, the word ‘Wendigo’ means ‘the evil spirit that devours mankind’. Native Americans believe that when a person consumes the flesh of another human being, he or she is overcome by evil spirits and transformed into a Wendigo, a creature with glowing eyes, long yellowed fangs, long tongues and penetrating claws.

“If we dig precious things from the land we will perish.”

Whether taken literally or figuratively, the story of the Wendigo holds many lessons for our society today. We live in a Wendigo war-world, a place where force dominates and an insatiable appetite for income and stuff is considered a quality – and indeed, a necessary – characteristic.

Wendigos want. Always hungry, they are never satisfied, and never have enough. It leads one to destroy its own home. You cannot fight a Wendigo, for it is made up of colorless evil, and fighting it only feeds it. Endlessly digging, the ravenous Wendigo can only be confronted with open hands and open heart. Only by sharing can it be defeated.

The Hopi People of Arizona eloquently described this predicament when they encountered institutionalized individuals for the first time. They referred to the institutionalized Europeans who arrived on their shores as ‘two hearted’, as they recognized that those who succumb to greed and ego, who lose the conscious connection that can only exist in the moment, had a second ‘heart’ to feed – one that could never be satisfied. We can see this two-heartedness in every aspect of our society today: literally devouring everything before it, our culture constantly seeks but seldom finds fulfillment.

“When a man moves away from nature, his heart becomes hard.”

We live today in a sea of pollution and systemic corruption. We have created a culture of separation based only on ‘masculine’ ideals, forsaking and even undermining the ‘feminine’ virtues of sustainability, individuality, co-operation, community and nurturing. Now women join the perverted masculine military, as long as they get equal pay… We celebrate battles, victories and war heroes, instead of healers, peacemakers, pacifists and progressive thinkers, artists and poets. We yield our power to institutions that blatantly value competition, conformity, war, profit and power over equality, peace, diversity, advancement and solution — and we allow them to determine for us the options and directions available in our lives without ever holding them accountable to that abuse of power.

And by this two-heartedness, we have collectively lost our way.

The Heart of the Rainbow Warrior 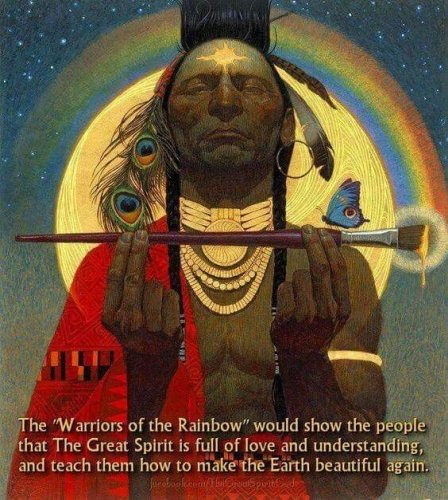 In order to be a Rainbow Warrior, one sheds two-heartedness and stops feeding the Wendigo. One stops choosing colors, sides, nations, flags, and all manner of institutional reflections. When one resides in one’s own heart, without impulses to speak for, act on behalf of or feed a second institutional heart, one clears oneself of the institutional mediation of the Wendigo world. Free of institutional allegiance, Rainbow Warriors represent all colors, all individuals, all beings. They celebrate – and when required, defend – the sanctity of all life and creation. But instead of a wielding a sword, the Rainbow Warrior has a clear heart, a sharp mind, and open hands, creating change through peaceful procedure. Rainbow Warriors have their hearts in the right place, as well as having their hearts placed right to cause thoughtful and peaceful change.

“When I was ten years of age I looked at the land and the rivers, the sky above, and the animals around me and could not fail to realize that they were made by some great power. I was so anxious to understand this power that I questioned the trees and the bushes. It seemed as though the flowers were staring at me, and I wanted to ask them “Who made you?”  I looked at the moss-covered stones; some of them seemed to have the features of a man, but they could not answer me. Then I had a dream, and in my dream one of these small round stones appeared to me and told me that the maker of all was Wakan Tanka, and that in order to honor Him, I must honor His works in nature. The stone said that by my search I had shown myself worthy of supernatural help. It said that if I were curing a sick person I might ask its assistance, and that all the forces of nature would help me work a cure.”

The American Indians lived in harmony with their environment for millennia, however there was occasional disharmony among the peoples of Turtle Island. Tribes battled each other at times, but never on the mass scale of European wars. Their culture remained grounded in the masculine and feminine in equal measure, undistorted by the hyper-masculine colonialism of the Europeans, and so disputes between tribes were actually settled. In fact, the term ‘bury the hatchet’ comes from the Iroquois legend that celebrated the peacemaker who brought together the five nations under the pine tree of peace:

During a time when people became unthankful, there was war in every village. A vicious cycle of war and revenge spun out of control to the point that no one really knew what the fight was about anymore. A child was born to a virgin, and when he grew up he traveled to all the nations to convince them to unite in peace. After a time, he was able to bring the people together and convinced them to literally bury their weapons under a white pine tree and symbolically bury their hatred and vengefulness. He also tied together arrows from each tribe to represent their unity as one.

Today our world is very much in a state where we have forgotten what we’re fighting about. We live vengefully, fearfully, hard-heartedly, continuing on a downward spiral of oligarchical collectivism and war that began long before any of us were born. To most of us, the very idea of tying our figurative arrows together in unity with foreigner individuals and institutions seems laughable — the dream of idealists. And yet whether it is prejudice of individual of nation, as who does that sentiment benefit, and who does it cost. We do have the power to make peace… 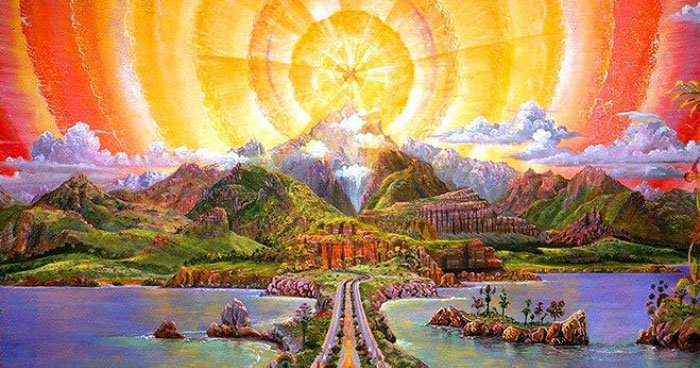 True social revolution begins at the bottom, not the top. It is up to Rainbow Warriors to make peace, be peace and spread peace. It is time to demand an end to war! It is time we began to heal Earth Mother and her inhabitants from generations of separation, conflict and destruction. We are everywhere, and we are more common than we have been led to believe. And there is no time to spare: without a groundswell of forgiveness, compassion and unity, there will be no healing, and without healing, there will be no revolution, and without revolution there will be no peace.

“If dem wanna win the revolution, de must win it with Rasta. You cannot win other way, because if you win other way you have go fight again. When you’re Rasta ‘n win, there no more war.”

Rainbow Warriors are clear, and yet of every color or vibration, but to heal a society of two-heartedness, a successful revolution must be green. Certainly the ‘green’ symbolism of integrative energy and cleaner living is ultra-important and of immediate necessity for revolution, but further a successful revolution has to be green more specifically in that it must reflect the healing energy of the heart chakra. The heart chakra is associated with the color green and is central among the seven chakras, its centrality indicative of power, grace, love and equanimity — the only qualities that may overcome this human sickness.

If a revolution does not begin in or emanate from the heart, if revolution is an act of violence not an act of love, then more than likely the revolution will fail and the cycle of conflict and destruction will continue. The Wendigo’s claw must be confronted with an open human hand, and only by sharing and caring with an open hand and an open mind can the Wendigo be defeated.

Be centered and open, with diamond-like clarity, as a Rainbow Warrior.

“When the earth is ravaged and the animals are dying, a new tribe of people shall come unto the earth from many colors, classes, creeds and who by their actions and deeds shall make the earth green again. They will be known as the warriors of the rainbow.”

Activist, author and Tai Chi teacher Ethan Indigo Smith was born on a farm in Maine and lived in Manhattan for a number of years before migrating west to Mendocino, California. Guided by a keen sense of integrity, humanity and justice, Ethan’s work is both deeply connected and extremely insightful, blending philosophy, politics, activism, spirituality, meditation and a unique sense of humour. You can connect with Ethan on Facebook, check out his author page on Amazon, or visit his new websites, Geometry Of Energy and Meditation 108, where Ethan offers lessons on individuation, meditation, the conceptualization of energy, and the metaphysical significance of 108.

Ethan is also the author of The Little Green Book of Revolution is an inspirational book based on ideas of peaceful revolution, historical activism and caring for the Earth like Native Americans. A  pro-individual and anti-institutional look at the history of peaceful proactive revolution, it explores the environmental destruction inherent to our present energy distribution systems and offers ideas to counter the oligarchical institutions of the failing ‘New World Order’. The Little Green Book of Revolution is available here on Amazon.