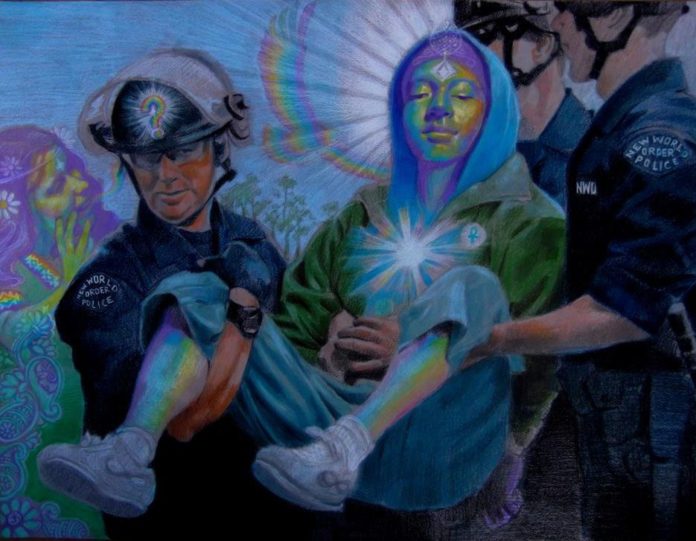 For thousands hacking at the branches there is one striking the root.

If, as Albert Einstein said, “unthinking respect for authority is the greatest enemy of truth,”then it stands to reason that we should think critically toward, rather than blindly believe in, authority. No matter who or what that authority might be.

Whether it’s an eccentric physicist with wild hair or an authoritarian president demanding respect without giving it. Belief in authority is a huge psychological hang-up for our species. It’s an evolutionary impediment of monumental proportions.

Rather than cowardice, rather than willful ignorance, complacency, and intellectual laziness, we should challenge the myth of authority –across the board. We should be ruthless with our skepticism, like a scientist regarding his own hypothesis, like peer-reviewed interrogators keeping the science of others honest.

Because the art of life, especially an examined life that’s well-lived, is scientific, logical, and reasonable. It strikes at the heart of the orthodoxy, whatever that may be. It undermines the Powers That Be, whoever they may be. And that’s likely to upset more than a few blind worshippers, myopic rule-followers, and willfully ignorant law-abiding citizens. So be it. Upset their precious apple-cart anyway. Especially if that apple-cart is outdated, violent, and based upon parochial reasoning and fear. As Oscar Wilde stated, “Disobedience was man’s original virtue.”

“As soon as the generals and the politicos can predict the motions of your mind, lose it. Leave it as a sign to mark the false trail, the way you didn’t go. Be like the fox who makes more tracks than necessary, some in the wrong direction. Practice resurrection.”

The problem with belief in authority is that it leads to the idea that we need to give a group of people permission to control us. And, as Lord Byron taught us, power given to an authority tends to become corrupt.

The problem with power is not the intent behind it. The problem with power is that it tends to corrupt the one wielding it regardless of their intent. So, since we all know that power tends to corrupt whether one has good or bad intentions, and since we know that we will all seek power anyway, it behooves us to be mercilessly circumspect both with our own power and against the power of others.

It stands to reason that we should not ignorantly give power to an authority by blindly believing it. We should instead challenge authority first, and trust it second, if at all. The best way to use our power is to use it against authority by ruthlessly questioning it. It’s a social leveling mechanism par excellence. As a wise, young sixth grader once said, “Question authority, including the authority that told you to question authority.”

Otherwise, people will fight and murder and commit genocide and ecocide for the so-called authority that they “believe” in. But they might not have fought so violently and thoughtlessly had they simply taken the power dynamic into deep consideration, nonviolently challenged that perceived dynamic, and then moved on smartly with their lives.

The best way to maintain a healthy skepticism, and not devolve into an ignorant, sycophantic, violent mess, is to take things into consideration and question them rather than blindly believe in them.

“To be modern is to let imagination and invention do a lot of the work once done by tradition and ritual.”

By becoming worldly patriots instead of patriotic nationalists, we turn the tables on xenophobia, apathy, and blind nationalism, and we become more compassionate and empathetic towards other cultures. When we celebrate diversity instead of trying to cram the square peg of cultural affiliation into the round hole of colonialism, we turn the tables on the monkey-mind’s one-dimensional moral tribalism and we usher in Joshua Greene’s multi-dimensional concept of metamorality.

By reinforcing global citizenry rather than nationalism, we turn the tables on both our lizard brains and the Powers That Be. Like Joshua Greene says in Moral Tribes,

“We need a kind of thinking that enables groups with conflicting moralities to live together and prosper. In other words, we need a metamorality. We need a moral system that resolves disagreements among groups with different moral ideals, just as ordinary first-order morality resolves disagreements among individuals with different selfish interests.”

Going Meta with morality launches us into a big-picture perspective. We’re shot out of the box of outdated tribal thinking and into a realm of higher consciousness, where our inherent tribalism gets countered by an updated logic and reasoning. We gain the holistic vision of “over eyes” (like the astronaut Overview Effect), where societal delusions and cultural abstractions dissolve into interconnectedness and interdependence.

“Every fact of science was once damned. Every invention was considered impossible. Every discovery was a nervous shock to some orthodoxy. Every artistic innovation was denounced as fraud and folly. The entire web of culture and ‘progress,’ everything on earth that is man-made and not given to us by nature, is the concrete manifestation of some man’s refusal to bow to Authority. We would own no more, know no more, and be no more than the first apelike hominids if it were not for the rebellious, the recalcitrant, and the intransigent.”

Overcoming magical thinking is vital for the healthy and progressive evolution of our species. Healthy progress depends upon courageous individuals capable of challenging authority. Especially authorities that are based in magical thinking.

Otherwise, there would be no progress. We would remain stuck in parochial, magical thinking. We would become a stagnant –or worse, devolving– species. To avoid unhealthy stagnation and entropic devolution, we need courageous individuals who refuse to bow to authority and instead choose to ruthlessly question and nonviolently challenge that authority.

Without those who are willing to disobey, we are lost. Without them, we are left with cowardly conformists, xenophobic nationalists, complacent pacifists, dogmatic believers relying upon blind faith, and tyrannical powermongers using their power to control others. In short: we are left with magical thinking over logic and reasoning.

So, I implore you, if you would be courageous, reasonable, healthy, progressive human beings: challenge Authority. Strategically disobey. Nonviolently revolt. Lovingly crush out. Tenderly recondition the cultural conditioning of others lest they collapse in upon their own cognitive dissonance. Dare to pull the blindfold from your brother’s eyes lest they unwittingly force the blindfold back upon you.

Above all, practice self-overcoming. Otherwise, power –either yours or someone else’s– will overcome you. Be just as circumspect with your own power as you are toward the power of others.

Authorities will come and go. As they should. Your own authority will wax and wane. As it should. The balance of power within the human condition is vital for the healthy and progressive evolution of our species. And nothing balances out power better than the courage to challenge authority. The biblical courage of David pales in comparison to the individual who bravely challenges the modern-day Goliath of entrenched authority.

Gary ‘Z’ McGee, a former Navy Intelligence Specialist turned philosopher, is the author of Birthday Suit of God and The Looking Glass Man. His works are inspired by the great philosophers of the ages and his wide awake view of the modern world.

This article (Overcoming the Myth of Authority) was originally created and published by The Mind Unleashed.