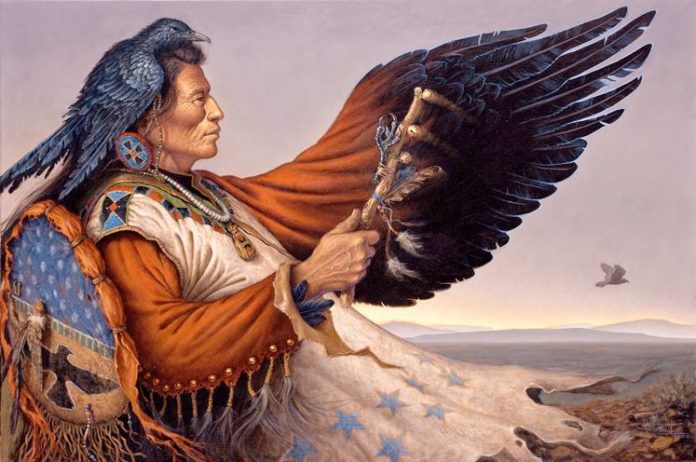 Power Songs are oral prayers expressing your true self, your nature, your individuality, your power. All cultures have power songs but you can have your own power song too. We think of the power in a hymn or an African chant, a Shamanic ceremony song or even in the howling of wolf. And there is definite power in sound.

All Shamans have several power songs because the vibration of the notes in the voice and in the fourth chakra of the throat stimulate sympathetic vibrations in the universe to respond. Everything is connected. What you put out comes back to you. When a butterfly flutters his wings in Cost Rica the winds of Africa are stirred. And when a sound is offered, the universe responds.

Power songs are used in preparation for journeying, healing, offering Reiki, praying, grounding, for protection, for celebration, for solace, anytime you want to connect with the universe in this very special way.

To demonstrate the power of voice and musical notes I would like to you try this exercise.

The fourth chakra is the note FA as in Do Re Me FA. Find a piano and discover the sound of this note if possible. Or find your own closest approximation to it. It is important to find the sound of FA.

The fourth note or sound of FA is also the note of manifestation or creation upon this planet. So if we want to manifest healing, for example, we can send our intention out upon the note FA into the universe and healing will resonate with our voice of FA and become manifest where we are intending. It really is that simple. Don’t try to complicate it like so many others have. This little simple secret is one that some people have paid thousands of dollars for. Some people have made millions creating musical tapes based on the sound of Fa, subliminal, holosync tapes that offer healing are based on the sound FA. But now you know how to do it yourself.

The visual symbol for the universe made manifest is the square. This symbolizes the power of thought and vibration becoming solid and material in this apparent world. So let’s combine the sound of Fa with the visualization of a square.

Get yourself someplace comfortable where you will not be disturbed for a while. Close your eyes and visualize a square. Intone the sound FA and watch the square and see what image appears there.

You can also do this backwards by visualizing the person you want to heal in the square and intoning the sound of FA. Or anything that you would like to manifest for the good of yourself and the world.

Shamans use this technique all the time. The last ingredient the Shaman uses here is desire or strong will. He or she really wants this healing to happen, they can really feel the wish, they put all their emotional energy into the intent.

I often get to dancing and rattling while I intone my power song and bring my whole body into the act of intending a healing for someone. The more feeling you put into it, the stronger the vibration.

Have you ever listened to a Native American song? There is usually one major tone for the song, isn’t there! Now you know why!

As a final thought, each note in the scale represents a unique vibratory pattern in the universe. You could do a study to find those out if you would like to know more about sound.

So you see the need for your own power song. Create one this week. it is usually just a line or two repeated over and over. You can use words or vowels or an imaginary language. As long as you create it with FA as your base and emotion and intent, it will be perfect. Power songs are usually kept private and seldom sung in public. The only time they are sung in public is when a group of Shamans have gathered to do a combined healing. It is your prayer to the universe.

Shaman Elder Maggie Wahls has been a practicing Shaman for over 50 years. She recently received a dispensation to reach out to those who have a desire to learn about a Shaman’s path and now offers an online course at www.shamanelder.com. Many people on this earth have been Shamans in other lives and only need to reconnect with their lost knowledge and skills to bring shamanic healing back to Mother Earth and its peoples. This is Shaman Elder’s goal. Please visit her website at www.shamanelder.com or write her an email for a free consultation at shaman@shamanelder.com

This article has been republished from The Mystica