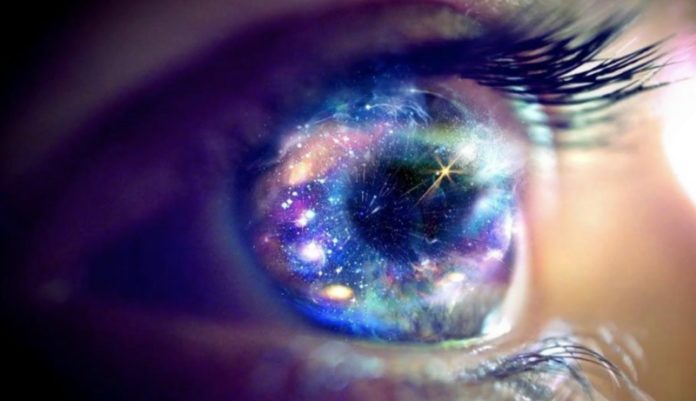 A radical change in human behavior away from its patterns of oppression, exploitation, war and ecocide will necessarily involve a drastic transformation in humanity’s relationship with thought. I’ve been saying this over and over again in different ways for a long time now, and yet I still get criticisms saying that I have useful insights but I don’t provide any plan of action.

The transformation in human consciousness is the plan of action. I really don’t know how to say it any clearer than that. And I will go so far as to say that that it is the only plan of action which will pull us out of our destructive patterns and into a healthy state of collaboration with each other and with our ecosystem. Unless we radically change the way we function above the neck, we will keep killing, consuming and destroying like a bunch of mindless automatons until everything is dead. I really don’t see any other way out of this.

I understand the criticism, though. When people read about the problem of capitalist ecocide and oligarchic strangulation, they don’t want to hear a bunch of stuff about mass ego death and spiritual enlightenment, they want to hear about nationwide demonstrations or organizing the working class or forming a new political party or cryptocurrencies or ending the Federal Reserve, or something along those lines depending on where they believe the problem is localized. In general, they want a fairy tale about people coming together to effect drastic, sweeping changes and turn the status quo on its head, which they will do because something something reasons, cough cough.

Seriously, why do people think revolution happens? Why do they believe their ideas have a chance of winning out over the existing paradigm? There are many who espouse dissident opinions more as a sort of ideological fashion statement than because they actually want to change the world, but presumably a lot of the people promoting Marxism, libertarianism, anarchism etc are doing so because they genuinely would like to see a world in which the status quo is overturned and replaced with something more wholesome. But why would that happen? Why would millions or billions of people overturn existing power structures and replace the current system with something drastically different in a world where plutocrats buy up massive amounts of media influence to convince everyone to keep everything the same? 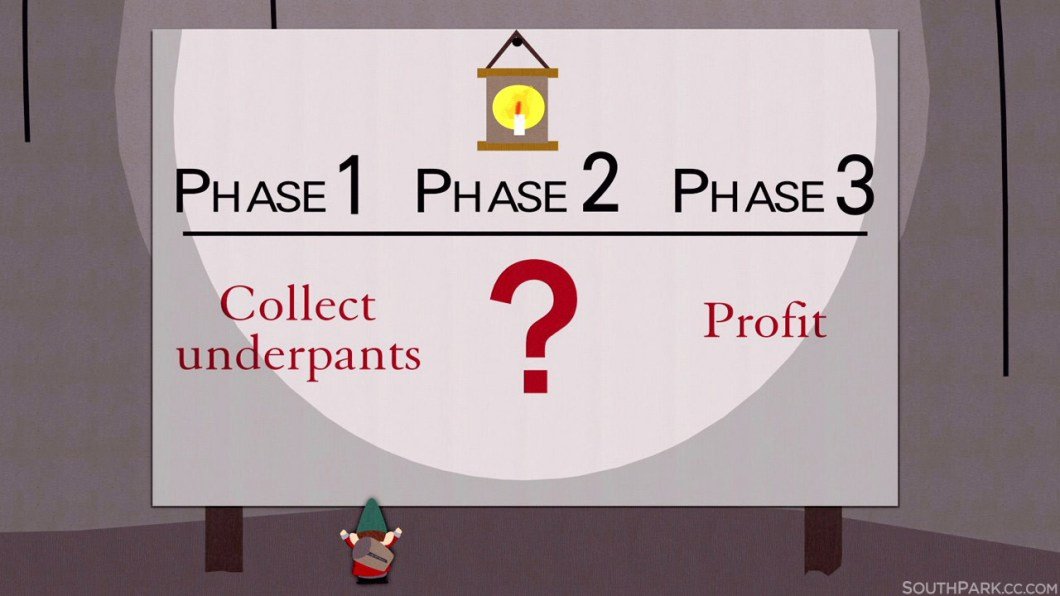 It doesn’t seem like many proponents of revolution and change have really thought about this very much. They have a good idea, and they can envision a world in which that idea is implemented, but getting from the idea to its manifestation seems like it’s often a jumbled mess in a lot of dissidents’ minds, not unlike the “Phase 1: Collect underpants / Phase 2: ??? / Phase 3: Profit” model of the Underpants Gnomes from South Park. Most dissident voices I see are primarily interested in Phase 1, and to a much lesser extent in Phase 3. Phase 2 is what I’m interested in, and in my opinion it necessarily involves a drastic shift in human consciousness.

People are not going to deviate from their patterns and suddenly begin shrugging off ruling power structures for no reason. Revolutions historically happen for one of two reasons: (1) things get sufficiently bad to make people lash out against their government out of sheer desperation, and/or (2) people are manipulated into revolting by other powerful forces. Historically neither of these things ever lead to the creation of a stable, beneficent government that takes good care of its citizens or the world, so neither will be sufficient for creating a world in which humanity takes good care of itself and its environment, and even if that were not the case it’s unlikely that either will ever be allowed to occur by an establishment so powerful and skillful at manipulation as the US-centralized empire.

So if there is to be a people’s revolution which is effective in both (A) removing our oligarchic oppressors from power and (B) leading to the creation of a healthy, harmonious new paradigm, it will necessarily come from a place that is historically unprecedented. It will involve people rising up against existing power structures not because things got so bad they had no choice, nor because they were manipulated into it by other rival power structures, but because people realized collectively that it is in their best interests to do so.

This would require a level of wisdom and insight that the majority of human beings simply do not possess right now. Right now, most people are very easily manipulated into advancing establishment interests by plutocrat-controlled media, and until that changes there will never be an effective and beneficial revolution. For that to change, humanity is going to have to shed its ubiquitous habit of creating mental egoic patterns which make us susceptible to manipulation via fear, greed, and herd mentality.

This doesn’t mean that the existing systems of capitalism and government aren’t going to have to change; of course they’ll have to change. But they’re not going to change unless we find a way to wake up from the deeply conditioned egoic patterns which are the norm in the world we were born into. We’ll keep repeating and repeating the same old patterns in whatever way we’ve been conditioned to until we either go the way of the dinosaur or find a way to transcend our conditioning.

So yes, true revolution means abandoning the insane strategy of endless economic expansion in a world made up of finite space and resources, but it also means seeing through the illusory nature of our sense of self and ceasing to believe the babbling mental narratives which are premised upon it. Yes, true revolution means ceasing the worldwide frantic, futile scramble to do what ever it takes in order to get the right kind of numbers in our bank account so we don’t starve to death in an arbitrary economic system based on imaginary bureaucratic fiat, but it also means bringing our unconscious coping mechanisms into consciousness and healing our childhood traumas. Yes, true revolution means organizing and engaging in politics and creating new systems together, but it also means learning to really love the most tender, guarded parts of ourselves which we used to leave unattended running on autopilot in our subconscious mental processes.

I firmly believe that we are capable of such a collective awakening, and there are experts in the field of inner transformation who claim to have observed signs that such an awakening may be underway. Teachers like Eckhart Tolle, Adyashanti and Jac O’Keefe all say something is very different in their field of work, and individuals are now having an easier time awakening from egoic consciousness than they used to. Spontaneous shifts are becoming commonplace to the point where teachers like Tony Parsons now center their entire body of teaching around the possibility of snapping out of one’s old perceptual frame of reference without engaging in any spiritual practices at all.

Of this potential for large scale awakening, Tolle says the following:

“I see signs that it is already happening. For the first time there is a large scale awakening on our planet. Why now? Because if there is no change in human consciousness now, we will destroy ourselves and perhaps the planet. The insanity of the collective egoic mind, amplified by science and technology, is rapidly taking our species to the brink of disaster. Evolve or die: that is our only choice now. Without considering the Eastern world, my estimate is that at this time about ten percent of people in North America are already awakening. That makes thirty million Americans alone, and in addition to those people in other North American countries, about ten percent of the population of Western European countries are also awakening. This is probably enough of a critical mass to bring about a new earth. So the transformation of consciousness is truly happening even though they won’t be reporting it on tonight’s news. Is it happening fast enough? I am hopeful about humanity’s future, much more so now than when I wrote The Power of Now. In fact that is why I wrote that book. I really wasn’t sure that humanity was going to survive. Now I feel differently. I see many reasons to be hopeful.”

There aren’t many people who’d be in a position to say if human consciousness has been making a marked shift over the last few years, but Tolle, who interfaces with that information constantly as an essential part of his work as a spiritual teacher, is certainly one of them.

So there are reasons to believe it is possible for us to pull up from our omnicidal, ecocidal, exploitative trajectory and create something new together. We may pass this test yet. But even if I’m wrong about that, what the hell else are we going to do? What better chance do we have, and what more productive way is there to spend one’s time on this earth than coming to a deep and abiding insight into your true nature? From my point of view, the front lines of the revolution are in our own consciousness here and now, not as some intriguing marginal facet of the battle for humanity, but as its source, its heart, and its apex.

The best way to get around the internet censors and make sure you see the stuff I publish is to subscribe to the mailing list for my website, which will get you an email notification for everything I publish. My articles are entirely reader-supported, so if you enjoyed this piece please consider sharing it around, liking me on Facebook, following my antics on Twitter, checking out my podcast, throwing some money into my hat on Patreon or Paypal,buying my new book Rogue Nation: Psychonautical Adventures With Caitlin Johnstone, or my previous book Woke: A Field Guide for Utopia Preppers.

This article has been republished from Caitlin Johnstone.