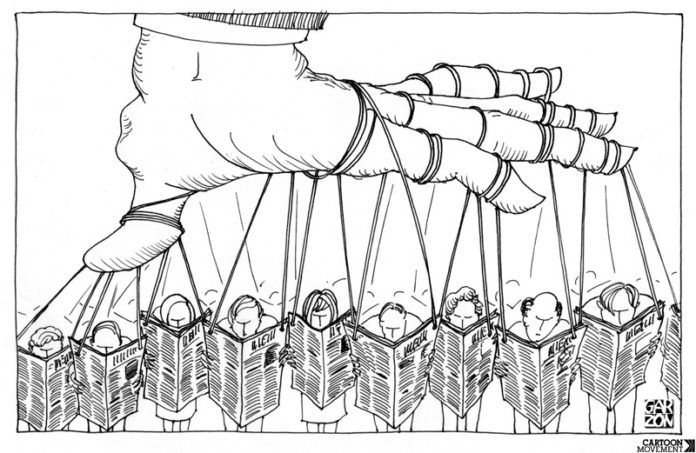 We are surrounded by screens full of voices that are always lying to us, and experts wonder why we’re so crazy and miserable all the time.

The screens tell us, “This is a perfectly normal and sane way of doing things. It is perfectly normal and sane to strip the earth bare and poison the air and the water in an economic system which requires infinite growth on a finite planet. People who say otherwise are raving lunatics!” And the social engineers wonder why there’s increasing disaffection and alienation among the populace.

The screens tell us, “Just spend your time in this world turning the gears of the machine and you will be happy. The machine is your friend. The machine takes care of you. Work hard pulling its levers and greasing its cogs until you are old and you will gain satisfaction,” and then they wonder why we’re all gobbling up antidepressants like candy.

The screens tell us, “We need to drop explosives on Nation X because they need Freedom and Democracy™. We know we said that about Nation Y and Nation Z and that went terribly wrong, but that’s because it wasn’t managed properly. Trust that it is good and proper for the citizens of Nation X to be killed with bombs and bullets,” and then they wonder why people keep snapping and committing mass shootings.

The screens tell us, “You are crazy and stupid if you want a functioning healthcare system. Are you trying to put our billionaires and military out of business?” and then they wonder why people are becoming paranoid and angry.

The screens tell us, “Look at that gibbering maniac trying to get a third party up and running in the most powerful nation in the world! Only someone who is deeply awful and defective would believe that the two party system isn’t serving us,” and they wonder why everyone feels disempowered and unheard.

The screens tell us, “Of course this is the way things are; it’s the only way things could ever be. Anyone who would try to change any part of this is either mentally ill or a Russian propagandist,” and they wonder why people shut down and numb themselves with opiates.

The screens tell us, “Everything is great. Everyone is doing fine. Everyone is happy. Look how happy everyone is on this sitcom. If you aren’t happy like that, it’s not because of the machine, it’s because of you. People need to be protected from your insanity. You mustn’t be allowed on any screens. You need to be silenced on social media. Trust us. Don’t trust yourself. Don’t trust that growing, gnawing sense that everything is fake and everything you’ve been taught is a lie. We have never lied to you. We have never been caught red-handed deceiving you and then acted like nothing happened. We have never gaslit you. You are misremembering things because you are confused. Shut up. You are dangerous. Shut up. You are foolish. Shut up. You are insane. The machine is sanity. The machine is freedom. Everyone is equal here. Everyone matters. Everyone gets a voice. Except you.” And the social engineers wonder why people are trusting them less and less.

And the experts wonder why the old tricks are finding less and less psychological purchase. And we wonder why it is beginning to feel as though we are being startled out of a very long and horrible nightmare. And our rulers wonder, in their very few still and sincere moments, if it was wise to build their empire upon a sleeping giant.

This article has been republished from The AntiMedia