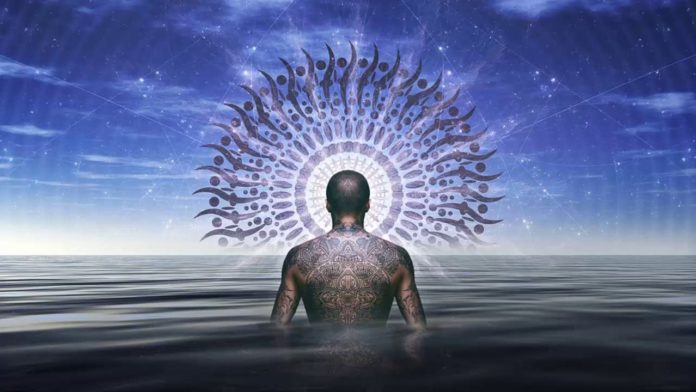 In order to conceptualize divine masculinity I began with defining the energy of masculinity and femininity in contrast. I utilized the Philosophy of The Duality of Polarity of feminine and masculine energy to slice away the superfluous and societal to find fundamentals. With this Occam’s Razor (4 looks like a knife) approach the fundamentals of the feminine and masculine divinity becomes clear and unhindered by national, traditional constructs.

The energy of the divine feminine is both receptive and creative.

The energy of the divine masculine is both reflective and projective.

The potential for these each of these energies to be displayed in one or the other, male or female, is clear, but the tendency of the archetypal energies lean in the above manner.

“The Dao is also the way in the following sense – nothing exists except as a relation with other similarly postulated ideas. Nothing can be known in itself, but only as one of the participants in a series of events.”

These energies are theoretic and helpful as a guide for comprehension of self and social situations in contemplation. In reality, in the moment, if there is any doubt as to what embodies divinity, simply seek to enact care. The more you push forward compassion and care the more your divinity unfolds.

There is another expression in martial arts that embodies the divine masculine or at least presents a notion or rule that is preventative of the perverted masculine. The notion is to never attack in anger.

“In Aikido we never attack. An attack is proof that one is out of control. Never run away from any kind of challenge, but do not try to suppress or control an opponent unnaturally. Let attackers come any way they like and then blend with them. Never chase after opponents. Redirect each attack and get firmly behind it.” ~Morihei Ueshiba

You can connect with Ethan on Facebook, check out his author page on Amazon, or visit his new websites, Geometry Of Energy and Meditation 108, where Ethan offers lessons on individuation, meditation, the conceptualization of energy, and the metaphysical significance of 108.