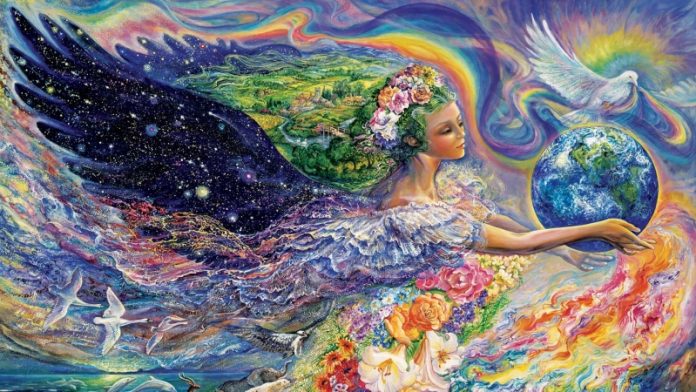 This week’s addition to our Healing Sounds collections comes from Hemi-Sync, entitled Gaia.

Deeply relaxing flute and guitar blend exquisitely with sounds of water in a soulful composition that stimulates imagination and creativity. A musical portrayal of Kokopelli, the Native American mythic hero who restores abundance by bringing forth the second summer rains.

Use Gaia for expanding awareness through musical imagery and self-exploration; for deeper, more profound meditation; or simply for musical enjoyment. Composed and performed by Richard Roberts.

Hemi -Sync is known more for its binaural beats, yet this sound experience is an incredible creation that is great when used in combination with a meditation or yoga practice, or simply to listen to in the background if you want to elevate the energy in your space.

Gaia producer Richard J. Roberts, following what he has termed Tao of Zero Ohms (literally: way of no resistance). Zero Ohms aptly describes Richard’s range of instrumentation, with woodwinds from around the world and electronics in a versatile palette of sonic colors. His sound is at once ancient and contemporary. When you listen to Gaia, all obstacles seem like the illusions they are, getting washed away by the soothing sounds of rain while a Native American flute harmonizes the energy.

During the ‘70s, Richard began his ongoing research into ethnomusicology and the psycho-spiritual effects of music. He attended master’s class with Jean-Pierre Rampal and has performed on stage with The Chieftains, Sarah McLachlan, and opened shows for Robert Rich. By the ‘80s, extensive experimentation led him to the musical styles now labeled as New Age and Ambient.

If you enjoyed this, you should also explore the entire Hemi-Sync library. The Hemi-Sync sound technology works through the generation of binaural beats combined with complex, multilayered audio signals. The signals work together to create a resonance that is reflected in unique brain wave forms characteristic of specific states of consciousness.