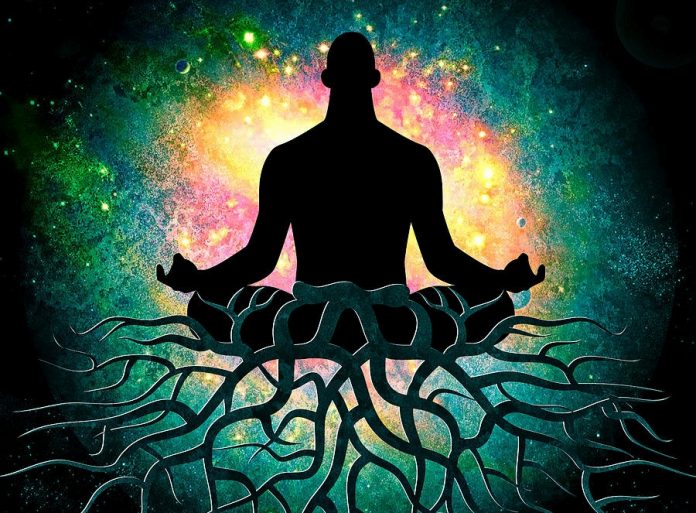 I like to fly. Ungrounded, this mercurial mind will hip, hop, skip and otherwise free-associate itself into near oblivion before finding something solid to tether to. Daily, I confront the seemingly daunting task of supplying Mercury with something beyond a whim to do – meaningful, guided action that is focused to some end. This often results in several conversations with myself before the pen scribes; before the body obliges or I decide it’s time to eat. It shouldn’t be a surprise, then, that one of the continuously playing mantras in my life-lesson rotation is on the need to ground myself.

After over a decade, I don’t quite have it down. Still, I’ve had some intensely spiritual experiences while performing mundane tasks like push-ups. I’m serious: the act of physical exercise – really, any kind of physical movement can be utilized – is a most effective means for grounding. Often just 20-30 minutes after a workout, my state of consciousness is so vastly different, I can’t even remember what the problem or resistance to starting the workout was in the first place.

Besides physical exercise, there are several other techniques that are commonly recommended for grounding. Walking outside barefoot on raw earth is a staple practice. The idea here is that the physical body to earth-body contact creates a circuit of energy that stabilizes you.

Sitting with trees is another way to draw down the dreaminess. Trees are emblematic grounders – roots buried, out of eyesight, stable, strong, straight, yet with their crowns open and receptive to the universe of light. In this, they truly are the masters; so much so that it is often just as effective to imagine yourself with roots, like a tree, extending from the soles of your feet into the earth. You can also summon the image of your spine as an energetic cord that continues beyond its end to tap directly into the ground beneath you – like a human taproot. Both methods can produce startlingly effective experiences of rootedness.

Other practices include working with stones: holding stones particularly suited to grounding in your hands, or lying down on bedrock while forging a unity between you and the planet. Almost any grounding ritual can work, as long as it gets the job done. What makes these practices effective is that they bridge the energetic connection between you and the earth across physical, mental, and imaginary landscapes. You are grounding your totality.

I’ve employed each of the above methods with enough success that my experiential reality must concede with, at the very least, their efficacy. They work. I do feel more balanced in my being afterwards. Whether it’s guiding someone else through an imaginary grounding ritual or an intentional exercise routine aimed at bringing down my energy, the results are uniform. I sink into my body, stabilize, find more clarity and generally feel more optimistic.

Up until recently, I considered grounding a basic element of practice, something I would do regularly as support to meditation or ceremonial work. It was never solely what I was doing, always ancillary. It was during one of these rituals that I glimpsed something else beyond the ground.

Employing visualization, breath, focus, and holding intention, I settle into my body. I see and feel the energetic cords that are projecting beyond my tailbone move fluidly but forcefully into the earth. As I often do, I imagine the taproot until it reaches the very center – that dense, metallic, electromagnetic core so important for keeping our planet suspended in space.

The usual process, once connected to the earth’s core, is to bring the focal point back up and into the body, and continue with the remainder of the ritual while maintaining this rooted state. This time, however, I hear a voice tell me to keep going, to keep projecting that taproot beyond the earth’s center. I’ve come to recognize the quality of these internal promptings, and there was substance to the urging. I comply.

The cords burrow until they emerge on the other side of the globe. And as soon as they do, rather than break ground as roots, they explode upwards and out in all directions, forming a crisscrossing energetic net that instantaneously surrounds the earth, like an aura. The psychic zoom shifts perspective, and I see the earth from outer space, embraced by the shimmering blanket.

And it dawns on me – the Earth is suspended in the cosmos. When we ground, we are grounding to something that is flying, anchoring our bodies to an ultra-mysterious, cosmic entity that we call home. We are grounding to a massive, round chunk of matter that is floating, mid-air, held together and suspended by a series of not-very-well understood physical forces – not the least of which is the simple fact that nobody really knows where the universe came from to begin with!

This is what we are grounding to? A series of unknowns? Tethering our physicality to something that, at the very core and to the extent that we are capable of comprehending, is a great mystery?! Beyond the veneer of physicality, the concept doesn’t even have solid ground to walk on. The very ground that life is supposed to be built upon isn’t solid at all – it’s little understood.

This didn’t make sense. Grounding to me was about coming down to Earth. It was about getting more human and less space-cadet; finding some modicum of harmony, acceptance, and useful engagement with the fleshy self. It is supposed to take you from the realm of “any which way but here” and plunk you solidly into a version of your existence that says: Hey, I’m here, I’m more balanced and focused, I’ve got some direction in my life and I’m being a person without my head in the clouds.

But, here, in this moment, as I connect more and more with the Earth, what I see and feel in its very ground is not solid, but mysterious…

Gravity is the grounding force.

The perspective shifts again. I now see the earth, smaller, along with its neighbors, our solar system in full view. At the center is the grand conductor, the symphonious sun unmoving in its splendor, inspiring all the planets to dance as they do.

As I examine the relationships between these familiar yet shrouded cosmic bodies, it occurs to me that the Earth is grounded – tethered – to the sun. Its stability is in an intimate weave with the sun itself.

Of course! This rudimentary spiritual tack called grounding is related to one of the most fundamental forces (yet little understood) of our physical universe: gravity.

Gravity is the grounding force. It is gravity – or what we call gravity – that is responsible for the formation of matter in the first place. It pulls things together. It also keeps things together. It helps to create patterns, stability and form. It enables vastly complex yet utterly and perfectly executed relationships between things of all shapes, sizes and dimensions to be created. In the story of the universe, gravity is the glue. It pulls on the fabric of space-time, creating funnel-like compulsions that are unavoidable. It is the macro-maestro of cosmic creation.

So here we are on Earth, not quite grounded to the physicality of the earth but to the force that is created by nature of its physicality. It is through the ephemeral, essential power – gravitas – of the sun that grounds the earth; and the sun, too, is suspended in a space of near-nothingness via the gravitational forces that hold the galaxy together (likely a black hole, yet another vastly unknown phenomenon with obscenely high gravity). And so must galaxies be organized in a similar fashion, bonding with nearby neighbors in systems of galactic orchestration that can only tip the scale in one direction: to its terminus, to the finest and furthest edge of the universe.

In some way, then, the universe is grounded to itself.

As I view this imaginary canvas of interrelationships, grand and small, the words of my teacher – as they so often do when I am seeing or learning something new – echo… “Earth is an astral realm…”

I finally start to understand what he means…

Grounding Into the Cosmic:

We ground as beings of the cosmos composed of light and matter. We take the entirety of our experiential landscape and say: Yes, this is who I am. I am grounded in my being. I am a being of outer space. I come from a planet. That planet is suspended in a soup of mysterious forces. These are the same mysterious forces that give rise to my life.

When I ground, I am grounding into this cosmic entity. I am planting my un-earthly roots in the soil of stars. I am balanced while soaring. I appear to be unmoving, but I am hurtling through space as part of something beyond total comprehension.

I ground not only into this planet but into my truth. My energetic roots extend and burrow and plant themselves unwavering into the purpose of my being here. I ground myself into my human, animal nature. This is not something different than the nature of my cosmic or divine or universal self. I am a being of earth, earth is a being of the sun, the sun is born in a galaxy, and this galaxy a super-galaxy, and so we are from the universe.

The esoteric lesson of grounding is a claiming of wholeness, literally, as who we are on earth, and as on earth in the universe. The energetic roots that so often fall short of claiming wholeness are seeking more than the soil, but the soil from which the soul of our existence has been wrought.

Beyond the ground we see that we are born from and usher ourselves into mystery each day. We are dropping our anchors into a seeming solidness, our roots claiming an elusive notion of density that ultimately depends on things unknown. This is not a paradox. If we were to ground into a notion that doesn’t include the ephemeral, untouchable element of our existence, we would be attempting something unattainable, dropping anchor in a bottomless ocean. If we plunge, roots first, into the mystery, we coincidentally find a deeper level of balance and stability beyond the ground: the ground of being.

Matt Toussaint is a shamanic explorer, writer, music artist, and ceremonial leader. He holds a Bachelor’s in Anthropology, where he focused his research on contemporary spirituality. He enjoys expressing himself through prose, music, and poetry as vehicles to achieve personal transformation. He has served as a Master Guide with Modern Shamanism, a wilderness guide, led a series of online shamanic workshops, and maintained a private practice in the Los Angeles, CA area. He is currently living in Peru and working at a plant medicine retreat center.

Matt’s personal practice website is shamanicevolution.org, some of his writing can be accessed here, and his work with plant medicine can be found through Blue Morpho. Feel free to connect with Matt via Facebook or email.