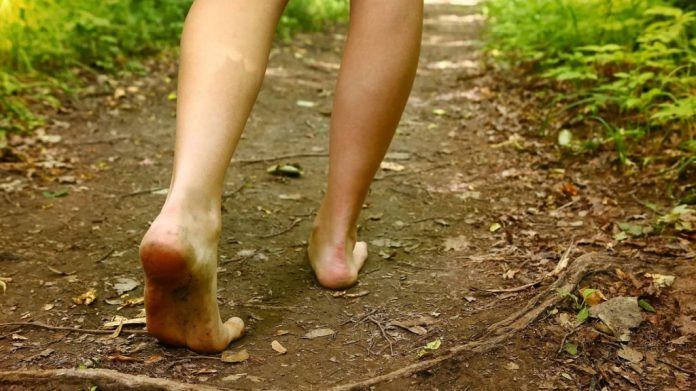 Why do so many people equate relaxation and pleasure with walking barefoot along the beach as the waves roll in? How come my son River’s first instinct is to take his shoes off when he sees a field of green grass?

Is it kooky human behavior that is simply hard-wired into our genetic makeup, or is there something more to this urge to remove footwear?

The Unshod, or Shoe-Less, Revolution

Historically speaking, it seems like we’re right in step with our forebearers. Long before we had cushiony sneakers, our distant ancestors tended to walk barefoot over rock, rubble, dirt, stick, and stream. Their feet were strong and nimble, able to sense and react to any surface they encountered. More recent native cultures often walk through nature on their naked soles, instead of wearing moccasins or similar footwear.

Commonalities like “barefootedness”, that we see repeated among ancient groups, beg for further investigation as to “why?” Especially in cultures where simple foot gear was already an option.

Thankfully, there is good science behind shoelessness and the findings are fascinating.

It turns out that the sensation we feel when our feet make contact with moist sand is more than just a feeling. This therapeutic touch of mother earth is laden with remarkable health benefits,

The primordial practice of walking barefoot, sometimes referred to as “grounding,” is only just beginning to be studied by modern science. One of the most groundbreaking findings is the powerful heart health effect of direct skin contact with the earth.

A study published by the Journal of Alternative And Complementary Medicine from 2013 states that walking barefoot “reduces blood viscosity, which is a major factor in cardiovascular disease”.

Blood viscosity is a term used to describe the “thickness and stickiness of your blood.” The lower the viscosity, the easier your blood flows through your blood vessels and circulates throughout your body. The higher your blood’s viscosity, or thickness, the slower it moves.

To test the effects of grounding on blood viscosity, subjects had their red blood cells (RBCs) examined under a microscope to determine the number of clumped groups of RBCs in each sample. High instances of aggregation (or clumping) in human blood increases your blood viscosity and can result in cardiovascular disease. This experiment was intended to measure whether grounding to the earth’s innate electrical charge would have a positive effect on this blood condition. Can grounding help to prevent the deadly disease that is linked to it?

Long story short, walking barefoot substantially lowered the instance of unwanted blood cell clumping in every one of the subjects and promoted healthier circulation.

*A later study in the same journal found that “grounding” or “earthing” may help regulate both the endocrine and nervous systems as well.

We present-day humans live in a sea of electromagnetic waves radiated by mobile phone signals, Wi-Fi, automatic doors etc. This is referred to as “dirty electricity” or “electromagnetic pollution.” Luckily for us, the earth’s surface is rich with electrons that can neutralize this dirty electricity. Vibrating and charging the currents within us back into healthy balance.

This can boost our energy, balance our mood, clarify our thinking, and perhaps even save our lives.

Next time you’re in front of an appealing patch of earth,

*I’d recommend you do this at least a few times a week for better heart health and overall happiness. We’re earth dwellers, why separate ourselves from her with rubber soles?

(I find it’s fun to go foot-naked in odd places in the midst of shoe-wearers who scratch their heads in confusion as they watch… BUT it’s also nice to do in the comfort of your own backyard or the middle of the forest).