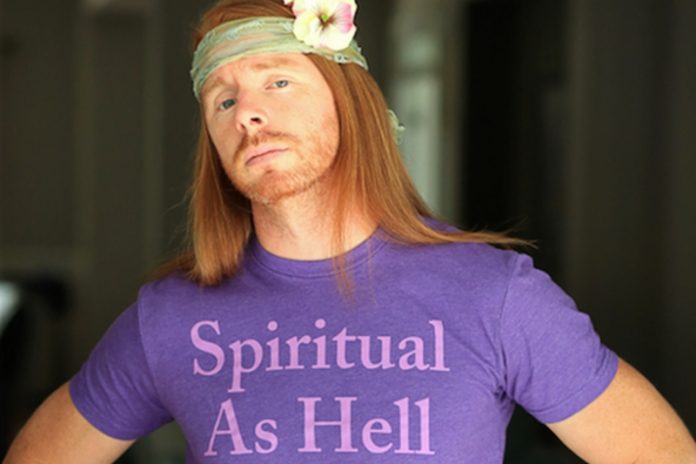 The spiritual ego is the most dangerous type of ego of all.

If you aren’t mindful, it can wreak total destruction in your life – but not in a violent or aggressive way. Instead, the spiritual ego is disguised under the mask of “good intentions,” “higher vibration,” “awakened perspective” and humble pomposity.

Beware of the spiritual ego.

It’s a trap that many of us spiritual seekers can and will, at some point, fall into. And the longer we remain in that spiritual ditch, that stagnant standstill, the more likely we are to develop into a spiritual narcissist.

Indeed, spiritual narcissism is perhaps the most tragic malady to befall humanity of all. We’ll explore why a little later. But first:

What is the Spiritual Ego?

Firstly, let’s touch on the basics. The ego is our sense of self; it is the illusory “I” story we carry around in the world as an evolutionary survival mechanism. Yet the ego is the source of all our suffering and our feeling of being separated from that which we truly are which is boundless, whole, and infinite. We might call this Spirit, God/dess, Life, Oneness, Consciousness, and so on.

So what is the spiritual ego? The spiritual ego builds on top of this fundamental ego that we carry around. It is the ego on crack, the ego on steroids, the ego inflated beyond its usual garden-variety size. Yet the thing is, we don’t realize we’ve developed a spiritual ego until life well and truly starts getting messy.

How Does the Spiritual Ego Develop?

The spiritual ego is a product of spiritual materialism – that is, using spirituality to serve the ego, instead of approaching the spiritual path with the intent on trying to move beyond the ego.

When being a “spiritual person” eclipses all else that a person is, this is the spiritual ego in action. Yes, there are positive benefits to building your identity around spirituality. But there are also some pretty scary consequences that we shouldn’t ignore.

Examples of the Spiritual Ego

15 Signs of the Spiritual Ego

The spiritual ego is so dangerous because it is nearly impenetrable.

People can spend their entire lives (or lifetimes) stuck in the trap of unknowingly misusing spiritual words, ideas, practices, and paths to inflate their egos.

Sadly, the spiritual ego can result in instances of abuse and even murder such as Jonestown, the abuse committed by Bikram Choudhury (founder of Bikram yoga), Swami Rama (Indian yogi), Bhagwan Shree Rajneesh (spiritual teacher), Sogyal Rinpoche, Andrew Cohen, and even Chogyam Trungpa (who coined spiritual materialism), and so on. The cases of spiritual ego are so wide and varied they are impossible to include here.

The reality is that as spiritual beings having a human experience we are imperfect. Hell, I’ve fallen into the spiritual ego numerous times – and it’s not pretty. But the crucial thing is to practice humility, openness, and the willingness to be honest with ourselves – these qualities are the best defense against spiritual egotism and narcissism.

So, without further ado, here are signs of the spiritual ego and spiritual narcissism that you need to look out for (both within yourself and others):

Essentially, those wound up in the woes of spiritual egotism frequently try to reaffirm their spiritual specialness to the world through covert and overt methods. However, more often than not, the spiritual ego is a slippery little devil that is hard to call out or define clearly, simply because we’re so close to it and find ways to justify it.