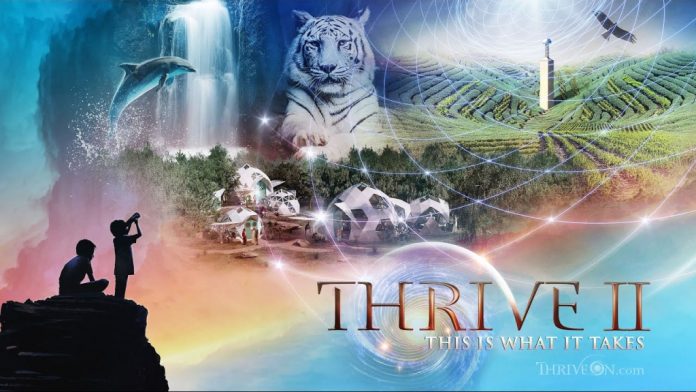 Are you looking for the Thrive 2 full movie?

WATCH IT FOR FREE STARTING UNTIL JUNE 20TH HERE

You can watch the trailer for THRIVE II below:

In 2011, an incredibly eye-opening film was released called THRIVE: What On Earth Will It Take? THRIVE is an unconventional documentary that lifts the veil on what’s REALLY going on in our world by following the money upstream — uncovering the global consolidation of power in nearly every aspect of our lives. Weaving together breakthroughs in science, consciousness and activism, THRIVE offers real solutions, empowering us with unprecedented and bold strategies for reclaiming our lives and our future.

You can watch the first Thrive film below:

Now, 9 years later, we are thrilled to announce that a sequel has been made, entitled THRIVE II: This Is What It Takes, and has launched exclusively at ThriveOn.com at midnight Pacific Time on Saturday, September 26th, 2020, where you can purchase the movie in any of 15 languages. The Thrive 2 full movie offers real solutions and inventions to address massive problems society faces today.

At 1 PM Pacific Time on September 26th, Foster and Kimberly, the couple behind both the first and second films, hosted a live-streamed after-party, with special guests from around the world, a live music performance and exclusive updates. The afterparty was free and was streamed on ThriveOn.com as well as on their YouTube Channel, so you can check it out if you missed it.

We encourage you to watch this extraordinary film that showcases REAL solutions, such as free energy, which are desperately needed as a bridge to a less polluted world and a true new conscious paradigm.

Spread the word about this film!

This film is going to be sharing true and grounded solutions to some of humanity’s most pressing issues, right when we need them most.

You can watch the trailer for THRIVE II below:

You can order a copy of THRIVE II here.