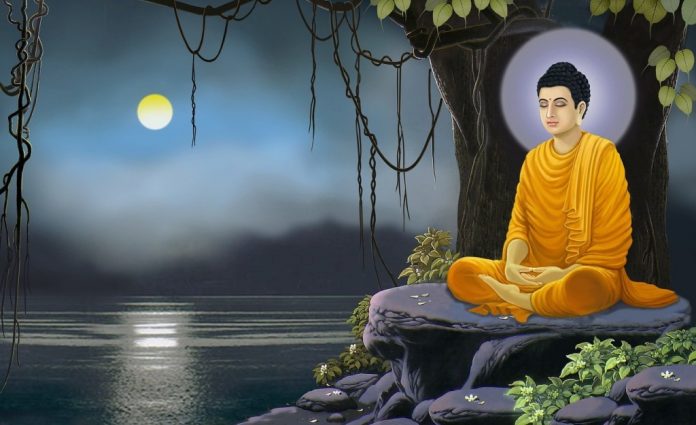 Siddhartha Gautama, the Shakyamuni Buddha, who we know as simply the Buddha today, was not a vegetarian. Nope, he wasn’t a vegan either!

Today, it seems that there is an underlying subtext among those who choose to take the path of being strict vegetarians or vegans that they are morally superior or more enlightened than others. However, what they may find absolutely shocking to learn is that the enlightened Buddha himself was neither a vegetarian, vegan, fruitarian, or breatharian. He, like other sages proclaims to have attained enlightenment, have eaten meat. While they most likely had a diet that most mostly vegan and vegetarian, they definitely had dairy, meat, and fish sometimes.

The idea that the Buddha taught strict vegetarianism in his day does not reflect the original Buddhist teachings. The Buddha did have rules for monks about meat eating, but he did not adopt the strict ‘no meat eating’ that was associated with Jainism in his day. Furthermore, he shows in the teachings that there are more important defilements and unwholesome states of the mind to deal with.

In the Amagandha Sutta in the Suttanipata (verses 239-252), Bhikkhu Bodhi [the famous translator] states that:

“The theme of the discourse is meat-eating, which testifies to a type of criticism that Gotama himself faced during his lifetime. The Buddha did not make vegetarianism compulsory but permitted his monastic disciples to consume meat, on condition that the animal was not killed specifically for them”:

The allowance to eat meat is “pure in three respects” (tikotiparisuddha) in the Buddhist teachings. The details of this can be found at Vin I.238, as well as at MN I.369 [Jivaka Sutta, Majjhima Nikaya Sutta No. 55]:

This shows that the Buddha does not require the monks to observe a strict vegetarian diet. It permits them to consume meat when they know that the animal has not been slaughtered especially to provide them with food. Such meat is called tikotiparisuddha, “pure in three aspects,” because it is not seen, heard, or suspected to come from an animal killed specifically for the monk.

There is also textual evidence that the Buddha himself ate meat. This custom provoked sharp criticism from other quarters, particularly the Jains, who insisted on strict vegetarianism. At AN III.49,19–23 the Buddha tells a lay supporter that he will accept a dish of pork (sukaramamsa):

The Anguttara Nikaya-atthakatha commentary explains this passage as: “The flesh of a one-year-old pig cooked with spices such as cumin seeds, etc., together with sweet jujube fruits.”

To get back to the Amagandha sutta, the brahmin Tissa accuses the Buddha of eating carrion (amagandha). This word is rendered as “carrion,” but it literally means “raw smell”.

In the Suttanipata verses the Buddha uses his particular way of teaching, in which a term with negative connotations is used and returned as the same to his critic, but this time with a Buddhist meaning attached to it. In this teaching the Buddha re-defines ‘carrion’ (amagandha) so that it does not mean abhorrent food, but immoral actions such as:

“destruction of life, theft, false speech, fraudulence and cheating, resorting to the wives of others” (verse 242) and such defiled mental states as “anger, vanity, obstinacy, recalcitrance, hypocrisy, envy, boastfulness, and haughtiness” (verse 245)

I include the complete Suttanipata verses 241 to 250 to provide the full context of this teaching:

The brahmin Tissa [asks the Buddha]:
241. “You said, O kinsman of Brahma,
‘Carrion is not proper for me,’
yet you are enjoying a dish of fine rice,
well prepared with the flesh of fowl.
I ask you about this matter, Kassapa:
what do you take to be carrion?”

244. “Those who are rough, violent, backbiters,

miserly, who do not give to anyone:
this is carrion, but not the eating of meat.

hypocrisy, envy, and boastfulness,
haughtiness, and intimacy with the bad:
this is carrion, but not the eating of meat.

crooked in their dealings, dissemblers here;
vile men who here commit wicked deeds:
this is carrion, but not the eating of meat.

who steal from others, intent on inflicting harm,
immoral, cruel, harsh, disrespectful:
this is carrion, but not the eating of meat.

248. “Those who are greedy toward these, hostile, transgressors,

ever intent, who are heading for darkness after death,
beings who fall head first into hell:
this is carrion, but not the eating of meat.

249.“Neither [avoiding] fish and meat nor fasting,

nor nakedness, a shaven head, matted locks, dirt, or rough antelope hides,
nor tending the sacrificial fire,
or the many austerities in the world aimed at immortality,
sacred hymns, oblations, sacrifices, and seasonal penances,
purify a mortal who has not overcome doubt.

250. “One guarded over the sense doors

should live with sense faculties understood,
firm in Dhamma, delighting in honesty and mildness.
A wise one who has overcome the ties,
who has abandoned all suffering,
is not tainted by things seen and heard.”
Devadaha Sutta: At Devadaha  In this sutta, the Buddha refutes the theories of the Jains — here called the Niganthas — an order of contemplatives flourishing in India during his time. Although on the surface this sutta may seem to be of strictly historical interest, it makes two important points that are very relevant to some common misunderstandings about Buddhism alive today. (Karma, Pain, and Suffering)

The Buddha was not a vegetarian. He did not teach his disciples to be vegetarians and even today, there are many good Buddhists who are not vegetarians.

It is true that when you eat meat, you are indirectly and partially responsible for killing a creature but the same is true when you eat vegetables. The farmer has to spray his crop with insecticides and poisons so that the vegetables arrive on your dinner plates without holes in them. And once again, animals have been killed to provide the leather for your belt or handbag, oil for the soap you use, and a thousand other products as well.

It is impossible to live without, in some way, being indirectly responsible for the death of some other living beings, and this is just another example of the First Noble Truth: ordinary existence is suffering and unsatisfactory. When you take the First Precept, you do your best to avoid being directly responsible for killing sentient beings/self-organized consciousness.

As Buddha mentioned in the passages above, there are far bigger barriers to enlightenment than eating fish or meat. If a precurser to becoming enlightened was being a vegan or vegetarian, Buddha would not be the Buddha we know.

Some food for thought.