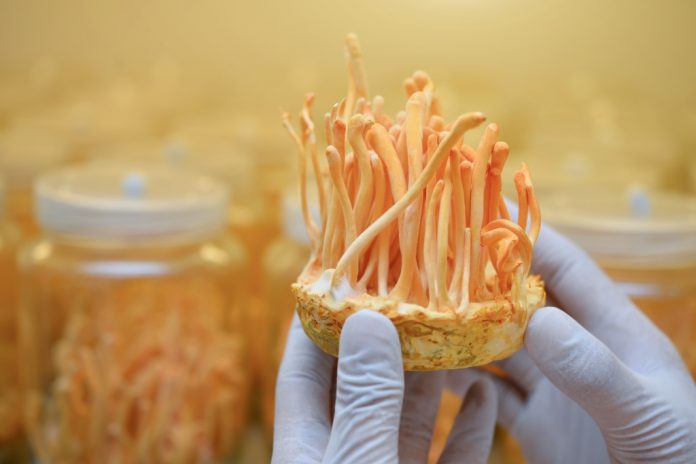 For centuries, traditional Chinese medicine practitioners used Cordyceps to give men a natural boost of vitality. That’s one of the reasons why it’s so popular in coffee blends these days. Men are, once again, turning to medicinal mushrooms like Cordyceps to boost sex drive, energy, and exercise performance.

Ang Wang, a Chinese author from the 1600s, brought Cordyceps to the world’s attention. He wrote about its uses in his 1694 book, The Classic of Herbal Medicine, a record of all known Chinese medicinal herbs.

Though often called a mushroom, Cordyceps is a mushroom-like fungus. It’s native to high-altitude prairies of the Himalayan mountains, particularly in the Qinghai, Tibet, Sichuan, Yunnan, and Gansu provinces of China.

Aside from the booming world of mushroom coffee, you can take Cordyceps supplements in powder, liquid extract, and capsule forms.

You can find two main species in supplements: Cordyceps sinensis and Cordyceps militaris. Cordyceps sinensis spores land on a caterpillar and consume it. These fruiting bodies resemble the caterpillar host and are not vegan — they can not be cultivated without the use of insects. Further, because of collection from the wild, they’ve become rare and hard to find, bringing their cost sky-high.

Cordyceps militaris have orange-red club-shaped fruiting bodies that — in the wild — grow out of pupa in the ground. However, most supplements are grown on farms without the use of insects. Cultivated varieties grow on grains, such as brown rice and are vegan.

Your supplement may contain mycelium, or the branching “hyphae” of a fungus that usually grows underground, the fruiting body, and some starch from the food source. Together, these components contain alpha and beta-glucans, cordycepin, and other health-giving nutrients.

How Cordyceps Can Boost Your Health

People in Asian cultures refer to Cordyceps as “Himalayan Viagra.” Historically, people have turned to Cordyceps when they want a little boost of sexual energy. Not only does it enhance your libido, but it also helps keep your reproductive systems working properly.

Long-term use of the active ingredient cordycepin may promote normal testicular function, countering the effects of middle age decline. Thanks to the testosterone boost, Cordyceps could be the best natural product to take for low sex drive — eliminating unnecessary chemicals and their side effects on your body.

Bust through drowsiness with a boost from Cordyceps, used in Asia to beat fatigue.[1, 2] The fungus has adaptogen properties — which means it helps the body adapt to stress.

Stress often comes with exhaustion, so Cordyceps can boost energy, performance, and reduce fatigue. It’s helpful if you are frequently sleepy or if you are recovering from something. Regularly taking Cordyceps promotes healthy energy levels. That way, when you aren’t (appropriately) tired, you can get more done at a more efficient rate.

Cordyceps may give a boost to your exercise performance. This fungal supplement works by helping muscles use oxygen more efficiently during exercise. It supports enhanced blood flow through the body. Studies showed that Cordyceps acts as an antioxidant, countering the harm from free radicals.

These combined effects create a noticeable increase in athletic performance. Your body may end up with a higher capacity for aerobic exercise, as well as more power during high-intensity interval training (HIIT). Not only that, you’ll also come out on the other side with less muscle stress and fatigue.

Traditional healers throughout the Sikkim region of India and Tibet found that yaks, goats, and sheep consuming Cordyceps sinensis stayed youthful longer. After that observation, they started using it to support increased longevity in people, as well. This led to its widespread use in traditional Chinese medicine.

Today, people have overharvested Cordyceps sinensis in the wild. It’s so rare that most people get a farm-cultivated version of Cordyceps militaris, instead, which has similar health benefits.

Cordyceps has positive effects on your brain health and performance. No more forgetting where your keys or glasses are!

The microbiome inside your belly is essential for proper gut health and digestion. About 80 percent of your immune system is in your gut. Taking Cordyceps modulates the gut and immune system, helping you maintain a healthy, balanced digestive system.

Harmful bacteria are no match for Cordyceps. This fungus can deter harmful organisms while supporting good bacteria. Your microbiome will flourish.

This fungus supports improved kidney function and liver health. These organs naturally detoxify your body. Not only does Cordyceps promote a normal response to inflammation, but it also protects these organs at a cellular level.

If your kidneys aren’t healthy, you increase your risk of developing chronic kidney disease. Cordyceps helps protect renal function overall. Cordyceps protects kidneys by promoting a normal response to inflammation and preventing chemical processes in these vital organs from getting off-kilter.

Your immune system has three parts. First, you have the physical parts of your body that prevent viruses and bacteria from getting inside, like your nostrils. Second, your innate immune system immediately reacts to eliminate intruders that do enter. Third, your adaptive immune system acts in a way that’s specific to each pathogen. For example, once you’re exposed to a virus, like Varicella (chickenpox), you’re unlikely to get it again because of the adaptive immune system.

Research on Cordyceps shows that it influences both the innate and adaptive immune systems. It modulates both systems at once, supporting your body at a cellular level.

Best Ways to Use Cordyceps

Reputable supplement manufacturers use mycelia and sometimes the fruiting bodies of Cordyceps. It’s generally mixed into another product. Below are some of the ways you can find this supplement.

Choose vegan capsules filled with Cordyceps militaris — with or without other herbs — for the healthiest option.

Taken with a dropper, liquid supplements are often Cordyceps mixed with other herbs.

Cordyceps is a mushroom-like fungus that people have used as a traditional herbal medicine for hundreds of years. It enhances sex drive, counters the effects of aging, and boosts gut, kidney, liver, and immune health. Cordyceps also increases energy and revs up athletic performance.

Cordyceps will likely be mixed in with other ingredients when you take it, like in Global Healing’s Androtrex, an all-natural vitality booster for men.