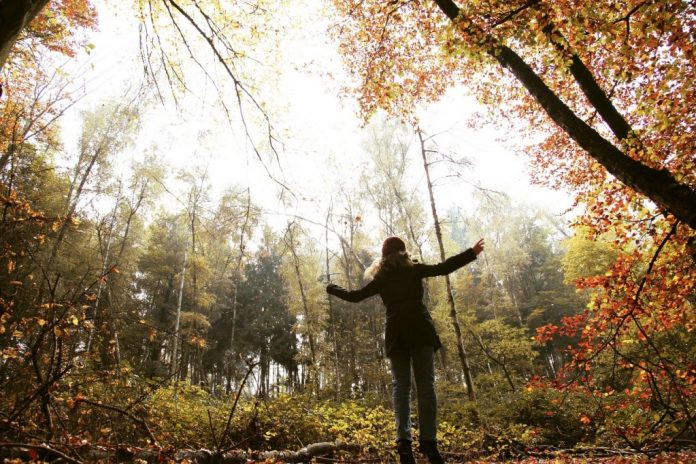 In a stretch of forest in Papua New Guinea, the trees ring with a hauntingly beautiful opera sung by birds; a superb fruit dove, a cinnamon-browed honeyeater, a bird of paradise, and a Huon bowerbird among the avian chanteuses.

In a paper birch forest along the Muddy River in Alaska’s Denali National Park, the sounds of the dawn chorus mingle with that of a babbling current, punctuated with the distinctive splash of a beaver tail hitting the water.

In the evergreen rainforest of Ankasa in Ghana, cicadas and other creatures provide a hypnotic chorus to usher in the sound of a rainstorm spilling through the trees.

These are just a few of the many soundscapes – like short audio postcards – which can be found at Sounds of the Forest, the world’s first-ever forest soundmap.

A collaboration between Wild Rumpus and the Timber Festival – an annual three-day festival in the heart of the UK’s National Forest – the project maps the sounds of woodlands and forests contributed by people from all around the globe. Photos and descriptions help add to the stories behind the audio glimpses.

Already the map has hundreds of recordings from more than 30 countries, and it is growing every day. The soundmap is an open-source library that can be used by anyone from which to listen and to create.

Being able to escape into the sounds of nature is a simple but effective endeavor; as evidenced by the launch of BBC Earth’s five 10-hour “visual soundscape” videos after research found that nature footage boosts bliss.

But it may be even more beneficial nowadays when many of us have been cooped up in our pandemic lockdown. Sarah Bird, director of Wild Rumpus (which partners in creating Timber Festival), says in an email to Treehugger:

When the pandemic caused the cancellation of our summer festival Timber, which sees thousands of people in the UK camp out in the National Forest to play, sing, dance and create under the forest canopy, we turned our minds to what else we could do to help people connect with the natural world.

She explains that they were drawn to the idea of creating something that might lure people to local woodlands – but something that could also create community by connecting people in a collaborative effort. She recounts:

It felt like nature was telling us loud and clear that a sound project was the way to go. With the usual level of noise pollution disappearing, we could hear the birds singing and the wind in the trees. It was after we launched the project that we realised just how mindful the process of recording would be and how it makes you stop and listen to the harmonies of the natural world.

Now that the project is live, the next step will be to transform map into muse. Selected artists will be invited to respond to the sounds by creating music, audio, or artwork, to be presented at next year’s Timber Festival.

“We’re thrilled with how many recordings have been contributed from forests and woodlands all over the world for our digital forest soundmap,” says Bird.

“I’m not sure we appreciated how compelling and inspiring it would be to sit in our homes, during these strange and uncertain times, and to be transported to a forest in say Panama, Montreal or Hong Kong. It’s been the most amazing thing, feeling so connected whilst so distanced.”

To hear it all, head over to Sounds of the Forest.