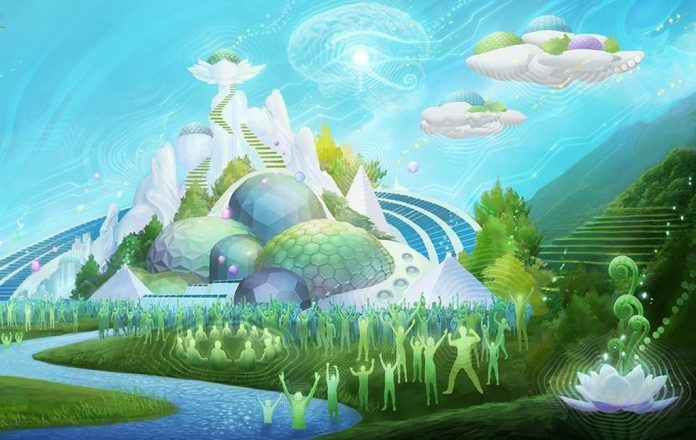 It may seem like the world is a chaotic mess right now. However, maybe it’s good. It’s a good idea to remember the Chinese parable of the Old Man and His Horse. Something may appear at first to be terrible or catastrophic, yet it leads to something better. We are seeing this play out right now but on a grand scale. The old world, which didn’t work that well for anyone, is falling away. A new world is emerging to take its place.

You need not cry because something is over. Instead, you can smile because it happened. Let’s face it. The ‘system’ was dysfunctional at its core. Even the wealthiest beings in the world have to breathe the same polluted air everyone else does. Nobody is separate from a collective consciousness and self-contained ecosystem. From an expanded energetic perspective, when any one being suffers, all others suffer. The system that has been operating society for so long has finally buckled. It is no longer supported enough to keep running on fumes. It’s game over for that which was so grossly out of alignment when life, abundance, harmony, and coherence.

A Bright Future Is On the Horizon

There is a bright future coming into focus. A new day is dawning. The darkest the night becomes is right before the dawn. It may seem like it’s hell on Earth, but that’s as much of an illusion as this holographic reality where matter itself doesn’t even exist. Ideas, memes, entities, and all the rest of it, are ultimately amorphous configurations of consciousness that can transform in an instant.

Without getting too esoteric here, let’s just say that each one of us has tremendous power to turn thoughts into things. Every single thought is creative energy manifest into some kind of form, be it tangible or intangible. Get enough people together, and those thoughts co-create an entirely new template and blueprint for humanity to experience life in.

There are different figures given by people who study how much conscious energy and how many intentional people it takes to reinforce and lock in a new thought, idea, and paradigm. Some say it’s the square root of 1% of the population. Others say it’s a few hundred thousand or a few million. You will even find some saying only a small group people calibrating at the consciousness levels of love, joy, or peace are enough.

We should avoid getting hung up on any specific numbers, since there are many factors at play. Something more constructive we can do is to play our part in the creation of the new world, that new conscious paradigm where everyone can truly thrive.

Instead of getting wrapped up in all the death throes of a dying world, you can help in creating the new one. Think of the exceptional opportunity you have available to you right now to do this. An opportunity like this has not ever occurred in recorded history.

The world is what we make it. We can do everything the dying world demands we do to support it, or we can stop agreeing to its distorted demands. We can stop playing their game, flip the board over, and knock all the pieces off of it. There can be a new template designed by us, for us. We have immense power within us, that is powered by the infinite Source of All That Is. It’s time we lived as if this was true.

You are not small. You are an extraordinary being of luminous light that can shine with the radiance of a thousand suns and dispel even the darkest shadows.