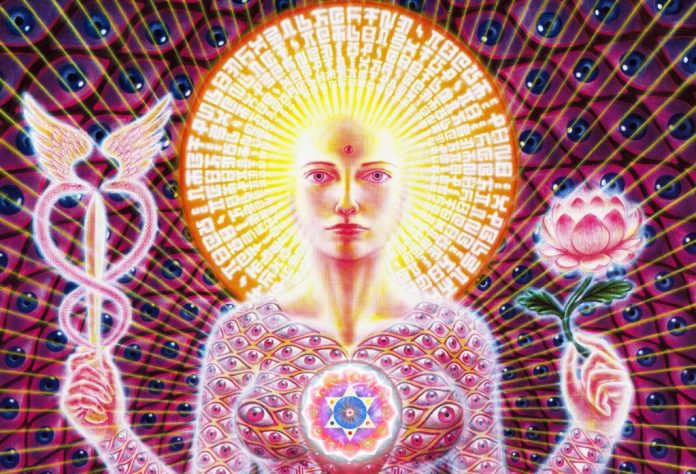 The teachings of alchemy have been cloaked for centuries in secrecy in order to preserve its integrity. Alchemy’s primary objective is the possibility of mutation by liberating the soul from its adhesion to matter. This is accomplished through the redemption, purification, and unification of the seeker’s prima materia, or consciousness.

The prime matter is the mystical chaotic substance which animates all of the cosmos. This famous secret was known by many names: Mercury, primordial water, firewater, the alpha and omega—in essence it can be likened to the void: the mother of creation. It is this psychic element the alchemist uses in a series of operations to create the philosophers’ stone. Thus, it is the beginning material and the end product.

Nothing is more central to the subject of alchemy than “The Great Work” or, “Magnum Opus”, the transformative work of redeeming the subtle from the gross, combining the celestial with the terrestrial, which is repeated in a circulatory process until it matures to the highest level of refinement producing the philosopher’s stone.

The spirit-matter continuum is the essential theme of alchemy, where we see plurality spring forth from primordial unity, and the necessity of separation to create a higher order of union once more. This is achieved by the reconfiguration and synthesis of the person’s elements: water, earth, air, and fire into the spiritual Quintessence.

In alchemy, the seven classical planetary bodies are associated with corresponding metals: The Sun, The Moon, Mars, Mercury, Venus, Jupiter, and Saturn were signified as the gradients Gold, Silver, Iron, Mercury, Copper, Tin, and Lead. This connection was based on the archetypal properties of each metal in the metallic kingdom being directed by their planetary equivalent through the law of correspondence.

To the mystic these correlations did not end in the exterior reality, rather they are projections from within our interior world and extend themselves outward into the world of form. Consciousness is the very fabric of reality that interfaces with itself on multiple levels of reality as illustrated in the hermetic maxim, “As above so below, as within so without, as the universe so the soul.”

Following this reasoning, we can discern that the development of our inner senses, transmutation of our soul, and union of our hemispheres are what the true work in alchemy pertains to. Ascension from the physical plane is through the synthesis of the feminine and masculine energies which is the entire aim of alchemy.

The Stages of Alchemy

Each alchemist had their own variation on the operations to completing the great work. Here is a widely practiced sequence:

The initiation into higher states of consciousness is always done by subtracting rather than adding. The essential starting place for the great work is the burning away of all that has been calcified into the conditioned self.

The esoteric dimensions of this step are the reducing of the individual’s programmed, egoic self into ashes. Fire is the spiritual catalyst that purifies one’s essence in the crucible of life. The majority of people would like to advance into higher levels of awareness, while still maintaining the comforts of their identity, belief systems, and multiple contradictory views.

Calcination provides the necessary friction that challenges the persona, annihilating the stagnant energy holding our ideologies and neurosis in place so that the spirit may awaken. This happens when we enter into a Dark Night of the Soul, a form of existential crisis where our entire worldview undergoes reconstruction. What we are left with is an emptiness that is usually experienced as intense grief. As the former self perishes, we encounter the inner void.

The most important characteristic of this element is that it holds all the information of creation, both celestial and terrestrial, stored within its mercurial waters. Due to the rule that substances are dissolved by substances that share a similar makeup aka: like dissolves like, water has the capacity to disband the body and soul of psychic contaminates.

In short, Mercury and its corresponding nature, water, can dissolve all because they contain all. The salvaged ashes of the psyche from calcination are submerged in water to thoroughly clear our vital life force from the remaining grip of the conditioned self.

Water is the element of intuition, the unconscious, and feelings, its higher nature is the sea of consciousness that is manifested into energy in motion (Emotion). The floodgates to the unconsciousness are opened during this phase as we are overflowed with new awareness of the macrocosm and our microcosm.

The process of dissolution brought many of our inner workings and hidden patterns forward from their watery depths to be examined in the light of consciousness. In Separation, we are further refining our psyche by consciously disbanding our attachments to the artificial self from our authentic one.

Alchemy is known as the Spagyric Art, meaning “to separate, and recombine.” This stage utilizes the element Air as it filters through our two natures, true essence and the programmed self, separating the subtle from gross matter. The most precious material concerning the alchemist is essence, this is the aspect connected to the soul. In order to cultivate the essence, the mystic’s whole being is aerated. This allows the seeds of enlightenment to deeply penetrate the vessel.

An example of this phase is the threshold beyond ordinary awareness called the Witness space. In this field we are drawn out of identification with the character we play and become the awareness behind the character: the one who simply witnesses the thoughts and feelings as they arise with no vested interest or judgment. The emptiness that was experienced as intense grief in Calcination has dissipated into the presence of stillness.

Conjunction is the reuniting of the soul and body after the purification of fire, water, and air that it underwent in the first three phases. This is the part of the great work where we begin operating from a higher intelligence. In this stage there is a reconciling of opposing forces within the individual whose masculine and feminine hemispheres are no longer warring and have begun to harmonize.

The mystic’s heart and mind have now been opened and are seeking balance. The alchemical marriage between the inner king and queen symbolizes equilibrium between the feminine dimensions of consciousness, intuition, and emotion, and the masculine dimensions of consciousness, intellect, and logic. This operation takes place in the Earth element since it is the first materialization of embodiment in the great work.

The alchemist’s internal elements are recombined in the endeavor to create oneness from the four. The metaphysical implications of this phase are the uniting of the Spirit (Mercury) and Soul (Sulfur).

One wouldn’t traditionally think of decay as a form of cleansing, but much like the Phoenix eternally dying unto itself so that it can be reborn from its ashes, fermentation provides the necessary decomposition that will allow it to occupy a higher level of being. This operation is marked by the putrefaction of the product that was assembled in the previous stage, into a ferment to ensure that full integration of the alchemist’s separate fragments have taken place. This ferment acts as a fertilizer for the soul. The process is similar to the caterpillar’s metamorphosis into a butterfly. Within its cocoon the butterfly releases enzymes that dissolve all of its tissues liquefying it into a soup that will be reorganized into the blueprint of a butterfly.

When an individual’s psyche is undergoing this same process, Carl Jung referred to it as metanoia. Although we may not be willing participants in our own demise such as the caterpillar, the agreement within the self that was reached during Conjunction has now made us so. We now seek to surrender the contents of our former identity and rectify all of our remaining cognitive dissonance as we incubate inside our cocoon of deep introspection.

Distillation is the boiling of the liquified ferment until it evaporates to steam, condenses, and descends to a more refined state of liquid. In this stage the essence is being liberated from matter in the form of ascending vapors. This represents our transition to spirit through the volatilization of the spiritual fire. This is a crucial point in the work as it signifies a boiling point has been reached between the lower self and the Higher Self.

A battle of wills is taking place where in order for the mystic to progress any further, their enduring shadow aspects must be truthfully assessed and assimilated. How this manifests over the course of our lives is during periods where we have attained a certain degree of truth but mistake it for being “the top of the summit.” Deep humility is required in order to sever the lower self’s attachment to its level of consciousness and elevate its being.

Our body, mind, and soul are the substance being concentrated for this duration to affirm their integrity. All remaining fragments of the ego are being filtered in the process of distillation, exalting our core aspects into their generative principles.

Here the fusion of polarizing forces-spirit and matter, volatile and fixed, body and soul-have wholly integrated to achieve unification. The product of the sacred union is the incorruptible philosopher’s stone, the embodied “I am” presence.

The masculine and feminine forces of nature have synthesized within the mystic, transmuting them into their Higher Self. Enlightenment and direct communication with the divine are both qualities of this state, as universal consciousness has become self-actualized.

The struggle to recover our lost faculties that began in calcination, are fulfilled in this stage as the chemical transfusions from each phase have accumulated to create the sulfur of gold.

During Coagulation, the alchemist’s heart has awakened, and unconditional love is discovered to be no mere sentiment, but the very fabric of reality. The subatomic particles animating our soul have reorganized to this truth. Hermetically, this represents the birth of the fifth element within us: the quintessence.

The fifth element is the universal life force known as Aether. This is the metaphysical heart center from which the classical elements originated from. Aether is the unconditional love that generates all planes of consciousness. The transmutation into this element is what will facilitate our ascension to higher dimensions.

The alchemical journey is the backdrop to all of our lives. Each of us experience trials and tribulations designed to move us toward a greater reality. However, these lessons tend to get co-opted by the ego’s nature to protect itself.

For this reason, all awareness is fleeting, all gnosis—mechanical and rehearsed, all insights are about others and not of the self, with no genuine traction made. In contrast, much like the caterpillar’s transformation into a butterfly reflected in Fermentation, alchemy is none other than the willing participation in our own demise. It is the death, resurrection, and rebirth of the divided ego consciousness into the Higher Self.

From this perspective we can clearly see why the majority of people would not voluntarily choose to sacrifice their worldly existence to embark down the path of the Magician. There is no incentive waiting for the dreamer who is deep asleep in matter. It’s for that very reason that the Great Work was given its name. Only souls of the highest character would endure such a fate or dare to actualize their full evolutionary potential.