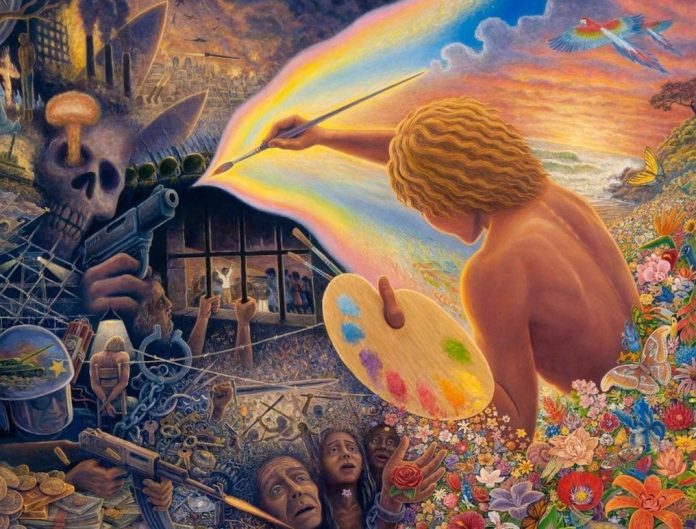 We are currently living in a period of time where extraordinary opportunities of progress stand side-by-side threats of destruction and enslavement. The two divergent paths could not be more drastic. This choice point forces us to both individually and collectively ask: what will we choose?

Two Visions for the Future

The two choices presented to us are either freedom or enslavement. By freedom I mean the sovereignty of the individual to do whatever they feel it is they want to experience while not harming anyone else. By enslavement I am referring to authoritarian control of the mind and body in every way imaginable.

From the moment we emerge as an individuated consciousness from the Source to the moment we merge back with it eons from now, we are free to explore Reality, interface and engage with it however we please. As we evolve, we become more intentional and focused on doing only that which is both benefiting oneself and all else simultaneously. Service-to-self actions no longer being sought after. The evolution of consciousness accelerates.

In a world full of people living deliberately, intentionally, and virtuously, the freedom of the individual and the freedom of the group are both equally important. By being highly aware of the interconnected wholeness of all life, we become mindful of our thoughts, words, and action because whatever we think, say, and do affects not only us but everyone and everything else.

It is possible to be incredibly free and still come together to achieve unified goals. That is how floating cities will be designed and built. That is how all forms of oppression and injustice will be relics of the past. All of this is not possible through means of force or coercion in a way where those results would have long staying power. However, to achieve them successfully, we need to be aware of who we truly are and always keep our egos in check so that they don’t run the show. Otherwise, hierarchical, authoritarian, and controlling systems will be back on the menu.

What does a future of regression look like? I’ll cut to the ultimate endpoints and make this list short and simple:

You get the idea.

What does a future of evolutionary progress look like? Here are some qualities it holds:

These are just a few examples of the many changes that will come when we go through collective conscious evolution. While the completion of the regression may take some time (if that path was collectively chosen out of fear), it’s ultimately the destination because those more psychopathic among us who have become so far removed from their Source sparks see it as the only way they can “enjoy” their existence at this point. However, they simply need to remember who they really are and connect with that Source light deep, down, obscured by the darkness that engulfed it over a long time. They, too, can choose evolutionary progress, if they want and give themselves the opportunity to connect with their ultimate origin, expanding that Source light and enjoying the remarkable benefits of doing so. Still, it seems rather unlikely that most of them will, and there aren’t many of them compared with us, which makes it incredibly easy to tether humanity to a time fractal that is one of exceptional evolutionary progress.

Will we choose evolutionary progress or regress? The window of opportunity is a small one, and the choice is one that we are being forced to make right now. This isn’t the time to be idle. It also doesn’t mean you have to be out there with a proverbial bullhorn. You can be the change with every thought, word, and deed.