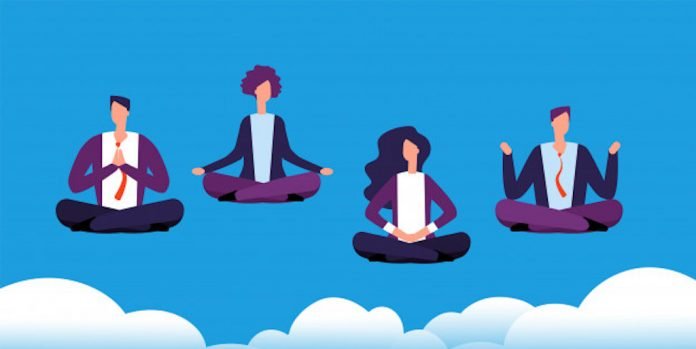 Mindfulness. It’s become a buzzword in recent years and everyone from soccer moms to Silicon Valley executives are now doing it. It may seem that this is great. After all, the more people practicing mindfulness meditation, the better, right?

Meditation is an absolutely extraordinary practice that may even seem like some sort of panacea. However, there is a dark side to how it is being used by some people today, especially in the corporate world. Believe it or not, mindfulness has become weaponized, in a way, to become used as a tool to reinforce the paradigm of passive and obedient workers who enlarge the corporate bottom line.

There is a tremendous amount of heart and spirituality that naturally springs forth from meditation. However, as with many things in today’s reductionist materialist culture, it has been stripped of these qualities by the insatiable machine that is on an endless pursuit of larger profit margins and greater productivity.

Often called either mindfulness or corporate meditation, this new version of meditation does indeed accomplish a few things, but they are outcomes that end up making people give away more of their sovereignty rather than reclaiming it.

Thanks to having a meditative practice every day, you can reach a point where you have mental clarity and a handle on your thoughts and emotions. This, in turn, positively affects your physical body in a number of different ways. Everything from lower blood pressure to having a healthier heart will be possible when you sit, close your eyes, and engage in mindful awareness. You will also have less anxiety, become kinder, and have better memory recall, among other things.

Perhaps the best benefit of all you can get from meditation is self-realization. You will no longer identify with the ego-self as being the real you. There will be an expanded awareness of you being an infinite being that is a Source fractal and completely sovereign. You will understand that the most important things in life aren’t the fulfilling of egoic desires but the spreading of love, reducing the suffering of others, and the cultivation of peace. You will probably even feel early on that if you are spending most of your time doing something that isn’t your passion or purpose, it will be something you will be itching to replace with something that is.

This all seems great, and it is. However, businesses and schools are not teaching mindfulness in a way that often prevents people from attaining those life-changing realizations or expanded states of awareness. What companies like all of the ones you know very well that are located in Silicon Valley and beyond are instructing their employees to do is a bare-bones meditation practice that keeps them as cogs in the Machine.

Meditation teachers who don’t mind being a part of the ruse are brought in and guide employees on how to essentially rewire their brains to become more efficient corporate worker bees. They become more like machines than self-sovereign beings.

While on the surface the teachers may even suggest that the mindfulness practices they are teaching will be elevating their happiness and increasing their emotional intelligence, the real reason they teach a stripped-down version of mindfulness is that they want to skyrocket productivity and manipulate their employees to work harder and do more in less time.

Preventing burnout and increasing productivity have become the focal points of this new breed of mindfulness meditation, as is stress reduction. None of these are necessarily “bad” per se. However, it’s in the context in which they are used, along with the severely limited approach to meditation, that is the issue.

Corporate America sees that its overworked employees are costing it $500 billion every year, with that number steadily rising. That’s quite a large chunk of change for these companies, who have to keep their shareholders happy by endlessly making more money every year. They put their best people on the case and found out about a little thing called mindfulness meditation. They learned from scientific studies that it can reduce stress, and do it well. Companies like insurance behemoth Aetna did their own studies and discovered that workers who took part in mindfulness training added about an hour of additional productivity to their workweek. For Aetna, this means making an extra $3,000 per year, per person.

With results like that, soulless corporations would be crazy not to use mindfulness as a tool of manipulated stressed out and burnt-out people to milk even more from them, right?

Getting the Most out of Mindfulness

While they call it the “secularization” of meditation, it is more of a mind control method used by harmful “cults” that want to ensure their followers do what they are told and do it well.

Don’t get me wrong. I think meditation should absolutely be taught everywhere and to everyone. This includes the most corporate of corporate settings. However, if it’s to be taught, it should be taught in a way that provides benefits to people beyond the surface level. It should truly expand their consciousness and help them make their way to the core of who they truly are, even if that means some of them will leave that particular corporate workplace.

I believe that people may genuinely be passionate about working in such an environment. However, many others do not, and are mostly there to get their paycheck and support their lives. Those people are not in true alignment with that kind of work environment, and could benefit themselves, as well as humanity, far more if they pursued their passion and purpose.

Mindfulness can be a profound practice that leads to radical changes internally and externally. We should encourage the full scope of this meditation technique to be practiced, no matter the outcome. Every person deserves to become self-realized and live their lives in complete alignment. Corporate-style mindfulness will not do so, but true mindfulness meditation will.