Biophotons, or ultraweak photon emissions of biological systems, are weak electromagnetic waves in the optical range of the spectrum (i.e. light). All living cells of plants, animals and human beings emit biophotons. A photon is a single particle of light but is too faint to be seen by the naked eye. However, biophotons have been detected and verified using photomultiplier tubes. While a few organisms, such as certain deep sea fish, emit quite considerable intensities (thus being easily visible), much lower levels of light, which can just be detected with photomultipliers, can be found in all kinds of other living beings.

The term “bio-” in biophotons has been introduced in the same way as it has been done in the term “bio-luminescence”, pointing to the biological source of the emission, and the term “photons” in the word “biophotons” has been chosen to express the fact that the phenomenon is characterized by measuring single photons, indicating that this phenomenon has to be considered as a subject of quantum optics rather than of “classical” physics.

This light emission is an expression of the functional state of the living organism and its measurement therefore can be used to assess this state. Cancer cells and healthy cells of the same type, for instance, can be discriminated by typical differences in biophoton emission. Every living cell transmits and receives energy across the electromagnetic spectrum from radio waves through infrared, visible and ultraviolet wavelengths. Biophotons provide the means for near instantaneous communication throughout our bodies, and create an intricate web of energy within all living systems.

According to the biophoton theory developed on the base of these discoveries the biophoton light is stored in the cells of the organism – more precisely, in the DNA molecules of their nuclei – and a dynamic web of light constantly released and absorbed by the DNA may connect cell organelles, cells, tissues, and organs within the body and serve as the organism’s main communication network and as the principal regulating instance for all life processes.

The processes of morphogenesis, growth, differentiation and regeneration are also explained by the structuring and regulating activity of the coherent biophoton field. The holographic biophoton field of the brain and the nervous system, and maybe even that of the whole organism, may also be basis of memory and other phenomena of consciousness, as postulated by neurophysiologist Karl Pribram an others.

There are a few mechanisms biophotons employ:

Biophotons can help with any illness or disease working at the base of the problem on a cellular level.

The general properties of biophotons are as follows:

The following are observed after biophoton use:

* Decrease in vessel spasms. This reduces vessel constriction and alleviates pain throughout the circulatory system.
* Increased electrical current in the blood resulting in lower blood viscosity. Red blood cells flow more easily via blood vessels
* Improved phagocytosis, resulting in a stronger immune system due to the increased activity of the T and B lymphocytes.
* Lower lipid content in blood 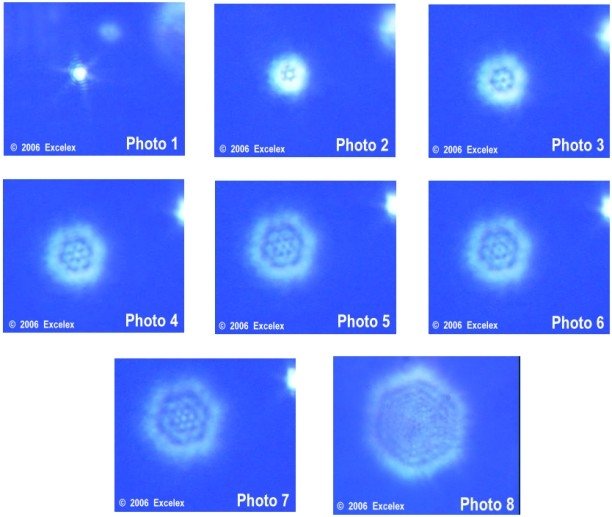 In February 2006, using a Somatoscope (a darkfield microscope with a magnification of 30,000 times) for the first time we have been able to observe the inside structure of biophotons in various drops of water and also in garden produce. What we discovered, when adjusting the focus on a single bio-photon, was that the center of this spark of light contained a six-pointed star within a hexagonal geometry … that changed from black to white, to black to white, and then to a star within a star

The discovery of biophoton emission gives credence to traditional and holistic modes of healing based on concepts of homeostasis (self-regulation of the organism), such as various somatic therapies, homeopathy and acupuncture. The “ch’i” energy flowing in our bodies’ energy channels (meridians) which according to Traditional Chinese Medicine regulates our body functions may be related to node lines of the organism’s biophoton field.

The “prana” of Indian Yoga physiology may be a similar regulating energy force that has a basis in weak, coherent electromagnetic biofields. It is further hypothesized that all living things might be connected together through dynamic biophoton fields.