The Ultimate Guide to Smudging 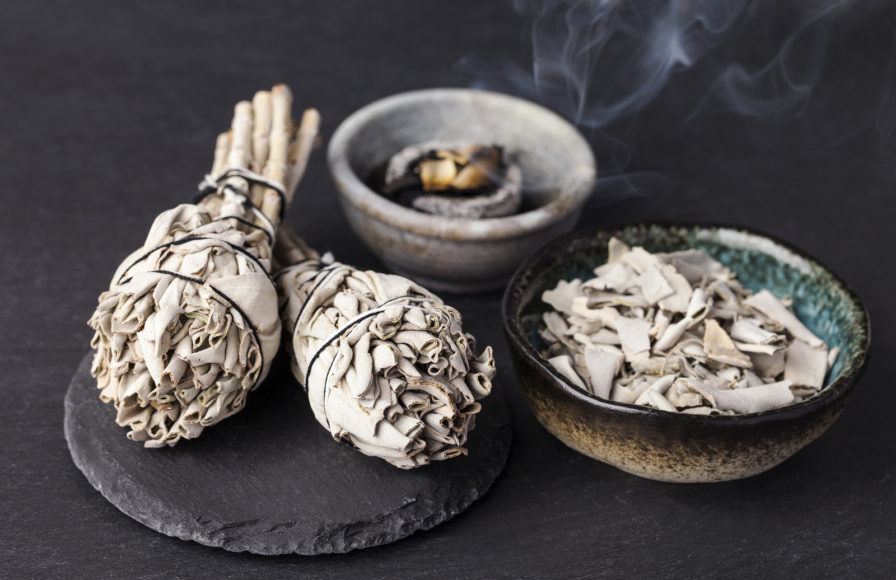 Smudging is a technique used to purify one’s surroundings and body from undesireable energy. The burning of herbs for emotional, psychic, and spiritual purification is also common practice among many religious, healing, and spiritual groups. The ritual of smudging can be defined as “spiritual house cleaning.” In theory, the smoke attaches itself to negative energy and as the smoke clears it takes the negative energy with it, releasing it into another space where it will be regenerated into positive energy. Smudging can be done to the body, to personal belongings, or to the environment in general.

These are the most commonly used herbs for smudging, although there are many more that may be used, including incense. Click on the names to get take to high-quality incense for smudging.

Smudging can be done anytime. However, there are certain situations where smudging would be more beneficial than other times. These include the following.

In general terms, whenever you feel “negative” emotions, you should smudge. 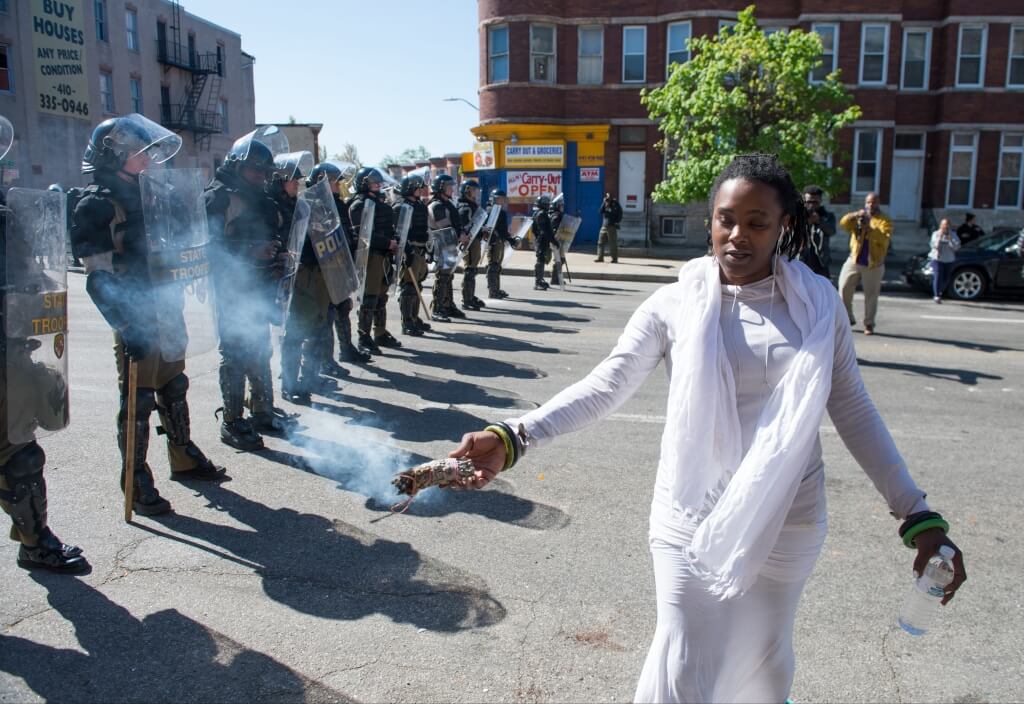 Learning how to smudge may be a little cumbersome at first, so to help simplify the process, the process will be explained by using white sage as the herb being smudged.

Keep the windows and doors closed to the room you have chosen to smudge. You can take a fan or a small piece of cardboard and start in one corner of your room, and gently waft the smoke after it clears the bowl, from the floor, up, toward the ceiling. Do this in a clockwise circle in each corner of your room.

Can You Just Sage One Room?

Energy tends to move where there is the least obstruction and resistance, in its function of perpetual movement. When there are open hallways, doorways, and other open spaces, energy will move through them. It may get ‘stuck’ and circulate within corners or amidst obstacles like clothes on the floor, furniture, etc.

Can you just sage one room? If you want to ensure that as little energy from the rest of an enclosed space like an entire home gets into a room, you should keep the door to it closed (if it has one). There may be spaces on the sides and below the door where some energy will seep through. Ideally, you will get to sage an entire home. However, if you are living in a home that is not yours, you can stick to smudging your room and still getting the benefits, without the rest of the house’s energy polluting the cleansed energy in your room.

Since, even with the door closed, some energy will come in over time, especially if you open the door, causing a temporary vacuum-like effect, you should smudge your room regularly. You can also open a window and allow in fresh and ‘clean’ energy from outside. In fact, if you cannot smudge for any reason, allowing fresh chi/energy/prana to come in from outside, especially if it’s a breezy or windy and sunny day, is a great alternative.

If you are doing a complete house, then do each room in this fashion. Do not miss a room. Get all of them. If you want only one room done, then close the door behind you and smudge the room–and leave the smoke in that room–do not open windows or doors to let it out. It will dissipate surprisingly swiftly. Y

ou can also smudge your garage and basement in the same, above manner. Just make sure the garage door is closed and that the door leading to the basement is closed while smudging and closed after you depart from it. The caveat to this is if you start feeling your eyes get irritated. That is when you should open the doors and windows until the irritation goes away.

Bend over, so that the bowl is about the level of your feet and ankles. Gently waft the smoke, with your fan, upward. As you slowly unbend and straighten up, you are bringing the sage/bowl and fanning the smoke up, up, upward until you’ve sent the smudging smoke up above your head. You are now “smudged” and clean, as we say.

Smudging Yourself: The Second Method

You can also smudge yourself, or have someone smudge you, by doing the following:

Light your smudging herb, wood, or resin of choice. Wave it around your body, approximately a foot away, in an oval shape. The intention here is to cleanse your electromagnetic field/aura of any gunk that should not be there.

Make sure you get around your entire body, both front and back. Pay special attention to the spine and central channel.

Advanced Smudging of Your Body

If you want to get as thorough of a cleansing as possible when smudging your body, you need to take into account of the dynamics of your energy field. As with the rings of a tree, where the oldest part of the tree is on the outside, followed by the younger parts of it being closer and closer to the interior, the same concept applies to your aura.

If you want a deep and thorough cleansing of your energy field, you need to smudge as much of your aura as possible. Start out close enough to your body, without exposing yourself to the danger of getting burned. Then, move outward, covering all 360 degrees of the field around your body. Keep going out as far as you can if you are smudging yourself.

Take care not to burn the animal, or have sparks fly out on their coats or hair. Start at their head and gently waft the smoke from their feet to their head, and then move back, over their spinal area, and to their rear feet/tail region. They are now smudged.

If you have a piece of jewelry given to you, an heirloom piece, or something that you love, but it has “bad vibes” or just a bad feeling on it, then you can do the following: Lay it out on a table or some place where it is flat. Start at one end of the piece and gently fan the smoke across it, so that the smoke covers and flows across the entire piece. When it’s done, let it sit for 24 hours, and then you can use it. The feeling/vibes will be very different. On a stubborn piece, you might have to do this 2 or 3 times, once a day, to get it entirely cleansed. 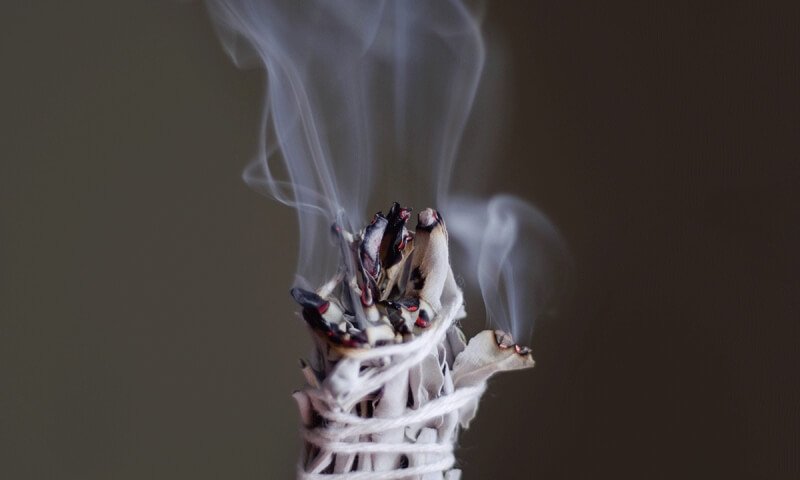 White Sage is the most popular herb used to smudge. Sage smudging is a simple and very effective way to cleanse yourself and your environment. Here is what you need to smudge with sage before you begin:

What Does It Mean When Sage Won’t Stop Burning?

People have asked this question before, so we felt we should answer it. While some people believe that incense won’t stop burning until the energy is fully cleansed, that’s not entirely accurate. Incense, and especially sage, is comprised of very dry natural ingredients that are very combustible.

Sage is extremely combustible, and blowing on if will make it burn for an incredibly long time. Avoid getting too worried that your space is possessed by some highly malevolent beings still because your sage smudge bundle won’t stop burning.

What you will notice sometimes is that the smudging smoke will move toward a particular person or area of a space. That actually can indicate that there is something within the area that needs a bit more smudging of energy to clear and cleanse it. 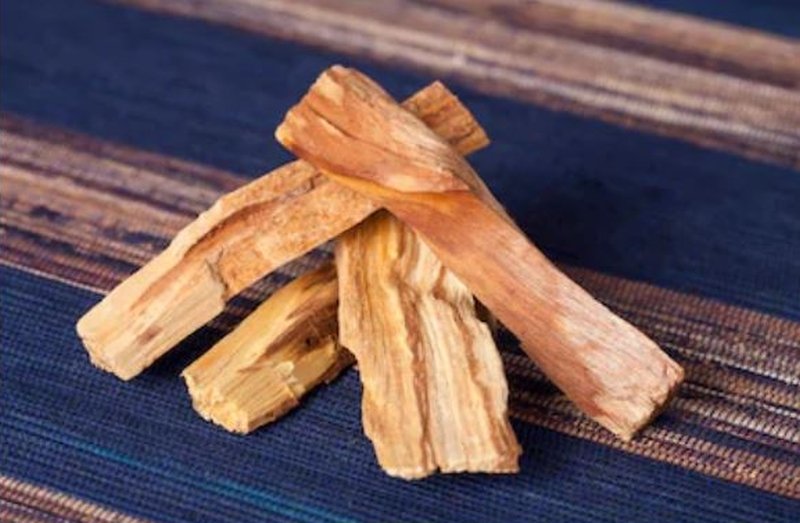 Palo santo, which means “holy wood” in Spanish, is growing in popularity as a way to smudge. Palo santo smudging is an aromatic and very effective way to cleanse yourself and your environment. Here is what you need to smudge with palo santo before you begin:

Alternatives to Smoke as a Smudging Technique

While smoke acts as a powerful and effective smudging technique to cleanse physical spaces of energetic gunk, there are circumstances where this won’t be possible. Perhaps you’re sensitive to smoke or you want to smudge an area where it’s impractical to have smoke billowing around, or it’s not allowed. This is when you could use a cleansing mist.

How to Make a Smudging Spray 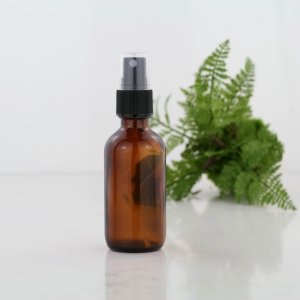 If you want to make your own smudging spray, it’s quite simple. Follow these instructions:

Always have a heat proof bowl (or a beautiful abalone shell) to put the sage in, after it has been ignited. Do not use a container that is not bake or tempered for high heat–it will crack it and it could cause a fire. Do not use anything metal, because heat is conductive and you will get burned. You can use a smudge kit

to make this all easier for you.

Do not have doors or windows or a fan on when you “smudge” yourself, a room or your house. It can blow sparks out of the bowl and onto the floor or surrounding area. Don’t be wearing billowy, long-sleeved blouse or shirt when you fan the smoke. Don’t have long hair draped down near the bowl with the smudge stick being held in it.

Light the herb with a match at the very tips of the leaves on top of the bundle. Once they flame to life, then blow them out quickly. We use a feather fan to do this, but you can use a piece of stout paper or even cardboard or a paper fan. It’s important to not let it blame and burn. Once it is lit, and the flame is blown out, it will smoke thinly or thickly, afterward. The catalyzation comes with the smoke, not the flame.

Once the sage is lit, you do not stop it from burning. When the ions have been neutralized, it will cease burning on its own. You can tell how ‘bad’ it is by the quality of the smoke the smudge stick emits: thin, light smoke indicates the place or person is fairly clean. Thick, rolling white smoke means the place or person has a lot of positive ions or negativity around them and it needs this thicker smoke to deal with it.

Place the lit, smoking top of the bundle of herb deep down inside the bowl and steady the rest of it, on the stick portion at the other end, with your other hand.

Look For a Smudging Wand? Check These Out!

New to Smudging? Get a Starter Kit!